In December 2007, while IAMI/ HESA co. was still working on the eleventh F-5B Simorgh with 3-7025B serial number which was later delivered IRIAF in February 2010, was contracted by IRIAF to start conceptual design of the air force’s future advanced flight training jet with ground attack capability. Nearly all of engineers and technicians of the Owj complex were moved to IAMI/ HESA and started to work shoulder to shoulder with the company’s engineers on the new project. 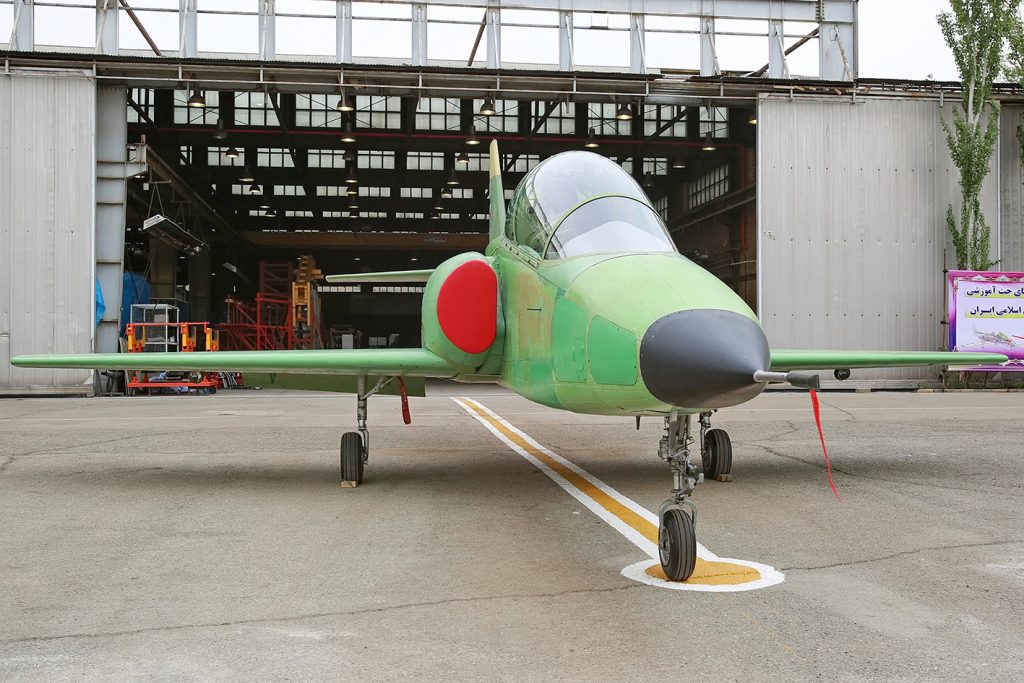 The first Kowsar-88 advanced jet trainer can be seen here when it was still incomplete
during its unveiling ceremony in Tehran in April 2017.

The lessons learnt from failed project “Ya-Hossein” was considered in aerodynamic design of Kowsar-88, because of this, the new airplane had firstly a pair of GE J85-GE-13s providing more thrust and increasing take-off weight of the airplane, enabling it to have more manoeuvrability rather to carry more fuel as well as weapons for weaponry training and even close air support missions.

From the beginning it had been planned to equip the airplane with glass cockpit consisted of three MFDs in aft and front cabins as well as HUD and HOTAS similar to the failed project SR.II’s F-5Es of Owj Complex, but due to the sanctions and stop of cooperation of the Chinese contractor involved in project SR.II, IAMI wasn’t able to reach this goal in short time.

Firstly due to lack of budget and secondly due to the sanctions, the project Kowsar 88 delayed and it remained on paper until 2014, when the first scaled down mock-ups of the airplane were manufactured for test in IAMI/ HESA’s wind tunnel. Finally in 2016, especially while the defense budgets had been reduced, a budget was assigned to development of the Kowsar-88, after Russia firmly turned down Iran’s request for procurement of at-least 24 Yak-130 advanced jet trainers.

It was planned to be flown for first time in February 2017, but due to delays in preparation of its engines and other parts (due to installation of the engines on a new Qaher F-313 mock-up for a propaganda show) the airplane was remained incomplete when it was brought from Shahin-Shahr to Tehran on lorry and was unveiled to public for first time during a propaganda show in Tehran on 15th April 2017.

Taiwanese prospective behind design and development of indigenous AIDC AT-3 Tzu Chung was considered during conceptual design of the Kowsar-88 which has made it even visually similar to the advanced Jet Trainer. IRIAF has projected to operate a fleet of 50 F-5E Saeghes and 14 F-5F Saeghe IIs as its future fighter airplanes in case of existence of arm sanctions until 2045. All these Saeghes will be made from existing fleet of ageing F-5E/Fs while the Kowsar 88s which will take role of existing F-5Bs and Simorghs will be used for advanced pilot training.

In case of IAMI’s inability to procure parts and engines from black market for manufacturing more Kowsar-88s, IRIAF will deliver its fleet of six grounded F-5As and six ageing F-5Bs to IAMI to recycle their parts for use in project Kowsar-88. By means of these old Freedom Fightes, a squadron of 16 Kowsar-88s can be formed within next ten years while the existing fleet of eleven F-5B Simorghs will be used as complementary jet trainers beside them.

Now IRIAF operates Beechcraft F.33A/C Bonanza and Parastoo for Primary Training, PC-7C for UPT, PC-6B2/H2 for Undergraduate Navigator Training (UNT) and F-5A/B, F-4D, F-7N and FT-7N for CCT and SUPT. In case of withdrawal of arm sanctions in 2020, there will be possibility of procurement of at-least 24 Russian made Yak-130s advanced jet trainers which will help IRIAF to also retire the existing fleet of eleven Simorghs and use their parts for manufacturing eleven more Kowsar-88s. Also the Chinese built JL-10 advanced jet trainer will most likely be procured as replacement for the existing fleet of FT-7Ns.