Numerous schemes have been developed to support the defence industry in its innovation effort, support being mostly aimed at SMEs and start-ups. This support comes from various sources, within the military and within the industry itself, with the aim of promoting innovative programmes.

The Direction Générale de l’Armement (DGA) started in 2009 RAPID (Régime d’Appui Pme pour l’Innovation Duale) which aimed at providing financial support to selected dual-use programmes submitted by SMEs, the maximum number of employees for being eligible being 2,000, thus projects concerning systems that can have military as well as civil applications. The amount of money provided depends on the type of programme, company dimensions, etc, however since the beginning RAPID supported nearly 400 projects for a total of over 250 million Euro. The key element is the short delay between the selection of the project and the financing, which is provided within four months.

Two recipients of RAPID funds were Photonis and Sysnav. Photonis, a 1,000 people enterprise, 600 of them based in France, has a 160 million Euro yearly turnover 80% of which is generated by defence and 20% by the civil market. Specialised in night vision, it took four years to develop the Lynx, the first CMOS sensor based on full solid-state technology operating in both daylight and low-light level. The next step was to bring colour to the sensor: the programme was proposed to the DGA and was accepted for RAPID funding. Photonis received 100,000 Euros to provide results within 12 months, the Kameleon programme being in fact finalised in only nine months. This solid-state CMOS sensor provides colour imaging from daylight to low-light levels, around 100 mlx, supporting frame rates up to 100 fps at a full SXGA (1280 x 1024) resolution. Monochrome images can be obtained down to 4 mlx. The Photonis CMOS features bigger pixels, that allow to capture more residual light, while an intelligent filter allows to extract colour information, something that even the human vision system is unable to do. The Kameleon became soon part of a programme for US Special Forces and will become part of the new Jaguar 6×6 reconnaissance vehicle; tests have shown that the availability of a colour image allows to increase speed at night from 40-50 km/h to 50-60 km/h. The Kameleon is now part of the study for a new generation version of the TopOwl pilot helmet under development by Thales. 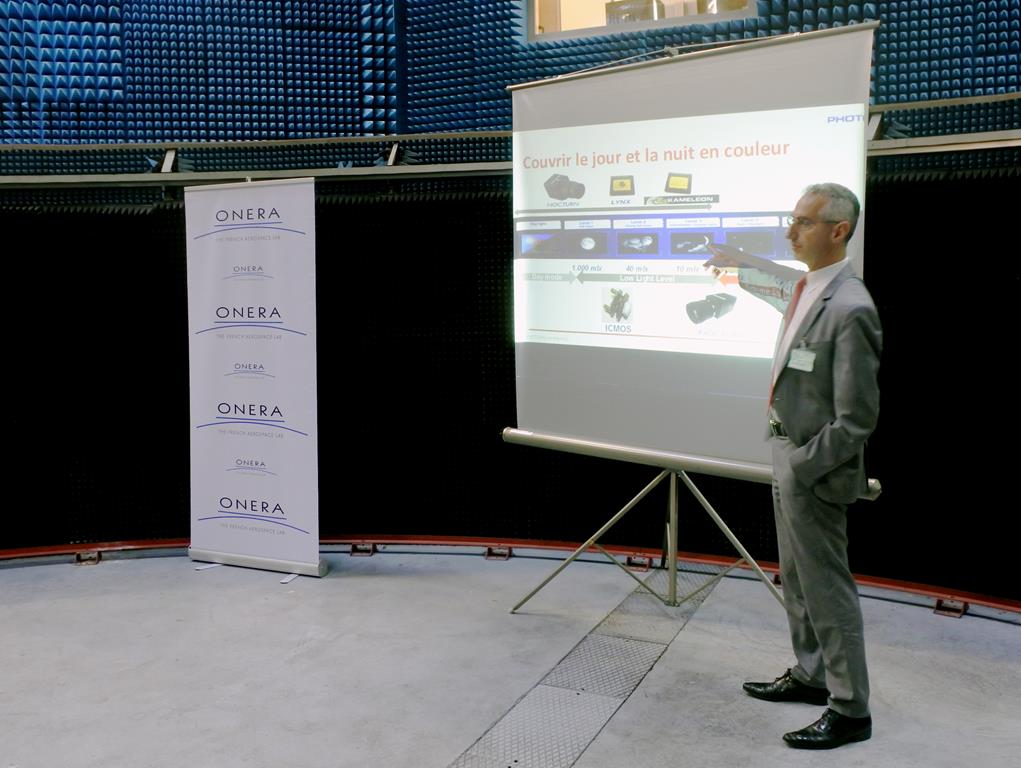 The second case study was that of Sysnav, a 30 people company formed in 2008, which already obtained 20 patents for its products, and which is focused on next-generation solutions for navigation and geopositioning extreme environments. Sysnav developed a magneto-inertial system that allows stand-alone navigation in GPS-denied areas; the system has six degrees of freedom thus ensures 3-dimension tracking, with minimal power consumption. Initial systems were dedicated to vehicles, and had obviously both military and civil applications, mainly providing the course, distance being given by the odometer. A potential miniaturised man-wearable version aimed at providing the infantryman with an autonomous system, which can also be of use for emergency services and other civilian users, was proposed for a RAPID scheme, medical uses being also envisaged. Sysnav received financing for a three-year development programme named Lorelei with the aim of reducing its systems, and finding new applications. With this the company grew from seven to 30 people, and now its turnover is based for 30-40% on the developments made within that financing scheme. A medical system used to measure leg movement in post-treatment phases was approved as a medical device in July 2017. Sysnav is now working on a military system, providing trajectory data, a DGA technological challenge being awaited for early 2018, the company considering with interest the FELIN 2 programme that might come to fruition in 2025, work on the new infantry system being due to start in 2021-22.

The latest instrument created by the French DGA to support innovation is known as DGA Lab. It traces its origins back to the SIA Lab, created in 2013 by the DGA to cope with innovation in the command and intelligence systems field, SIA meaning Système d’Information des Armées. Due to its success, in 2016 it was decided to extend the area of interest to all technological areas linked to defence, and in June the SIA Lab became the DGA Lab. The other objective was to further increase responsiveness, working with a start-up mentality, and thinking out of the box. DGA Lab is a meeting point among operational personnel, DGA experts, academia and industry, as well as a place where innovative technologies are experimented and demonstrated. Regular sessions are organised to discuss specific topics, to allow companies to illustrate their proposals on specific subjects, or to demonstrate developed solutions. Following the needs expressed by operational forces, DGA Lab identifies the way to respond and starts to search existing solutions among the over 2,000 companies already qualified. One month later candidates provide their proposals, which are evaluated within one month, bringing to a downselection of three companies, which one month later are called for a demonstration, each of them having a 45 minutes slot to present their product. Every month the DGA Lab starts working on a new subject. Over 125 companies had presented their products since the process was started, 25% of them having direct returns thanks to the DGA Lab approach, while another 8% had indirect returns. Two of these presented their experience during the meeting.

MondoBrain is a company specialised on augmented intelligence solutions aimed at digitising decision making, augmented intelligence being the aggregate of human, artificial and collective intelligence. Thanks to DGA Lab it could illustrate its new planning tools, part of investments being provided by the US National Security Agency, the company having retained intellectual property. Another project allowed to visualise in a few hours the complex problems linked to finding the right angle of approach for landing on board an aircraft carrier, the final result being a decrease from 9% to less than 1% of casualties in strong wind conditions.

Biomodex developed a life-like 3D printed replicas of patient anatomy direct from their medical images, that helps surgeons to validate their treatments resulting in more predictable and consistent clinical outcomes, the third cause of mortality being medical errors. With a 22 people manpower, split between Paris and Boston, the company developed a 3D micrometric system capable not only to reproduce shapes and colours but also mechanical properties of organs, based on the scans and medical images of real patients, allowing surgeons to optimise their treatment before acting on the patient himself. Proposed to the forces to train military doctors who are now called to duty not only in operations but also in case of terrorist events, in November 2016 the company presented its project to the Service Sanitaire de Armées, the Armed Forces Medical Corps, and in early 2017 a RAPID financing scheme was launched, the product being obviously dual use. Other actors, such as the École Normale Supérieure (ENS) and the Institut National de Recherche en Informatique et en Automatique (INRIA), were involved, to develop cardiovascular and traumatic tissues models, 1.2 million Euro being obtained through the RAPID financing. Biomodex also cooperates with 3DExperienceLAB, the Dassault Systèmes innovation laboratory. 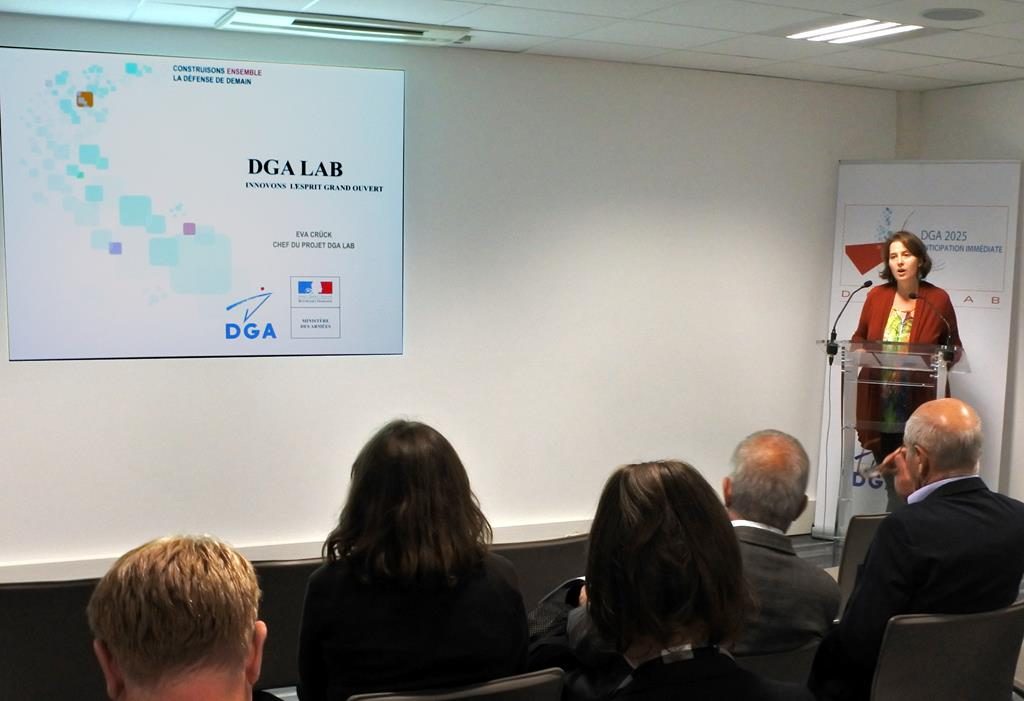 DGA Lab is also managing the acquisition of an indoor drone for Special Forces. Phase 1 started in early 2017 and lasted two months; a first meeting was used to explain to over 100 start-ups and SMEs what SFs where looking at, which led to the creation of 15 teams which developed their technical concepts. Mission needs were contained in a 12-page document, the system being required to evolve in buildings with stairs, corridors, etc, no preferred solution between flying or ground systems being indicated. These were demonstrated and validated in the 3.5 months long Phase 2, bringing to six candidates. Phase 3 will lead to the final demonstration and to the financial offer. At each step the teams were rewarded for their job, in order to compensate their financial engagement. “a we are in a competitive phase I cannot add more details,” Eva Crück, chief project of DGA Lab told the audience. The DGA Lab concept has shown its value, a DGA Lab V2 being expected to be launched in 2018.

While the two previous support schemes for star-ups and SMEs were provided by the DGA, the third one comes from the industry itself, and more precisely the GICAT, the French land and air-land Defence and Security Manufacturers that includes over 200 members. Known as Generate, it was launched in 2017 and aims at improving the mutual knowledge between the defence industry and start-ups coming from other sectors, in order to exploit synergies and bring innovation at the heart of the land defence and security industry. Three main problems have been identified, that start-ups have to fight with: financing, knowledge and focusing. The first is self-explaining, the second deals with the procedures typical of the defence environment, while focusing means that too often start-ups do not pursue their project until it becomes a product. The GICAT decided to create Generate in order to overcome the hurdle that impede to a start-up to become a GICAT member, a 150 million Euro turnover, allowing thus innovative companies to become part of it, and to exploit the advantages such as information, export support and communication. To acquire the Generate label a company must be French, innovative, and must exist since at least three years. It files its documentation that is evaluated by a jury, and if accepted it becomes a Generate member for two years, that can be repeated once. The company signs a chart in which it commits not to defocus its activities from the defence business and then becomes an associate member of the GICAT, which will organise meetings with key defence players, will link up those start-ups with its industrial members to improve cooperation, some member of the GICAT providing sponsorship to the new entries. Moreover in 2018 Generate labelled companies will be able to exhibit at Eurosatory with minimum investment. Over 10 start-ups have already been accepted, specialised in niche domains, ranging from UAV centimetric positioning to language learning, from drones to anti-drone solutions, etc. Many of them could be met on Day 2 of the GICAT press tour.