The central position at the Beretta Defense Technologies stand hosts this year a submachine gun: named PMX and chambered in 9 x 19 mm calibre, it is replacing the ageing PM 12 in the company Beretta catalogue. 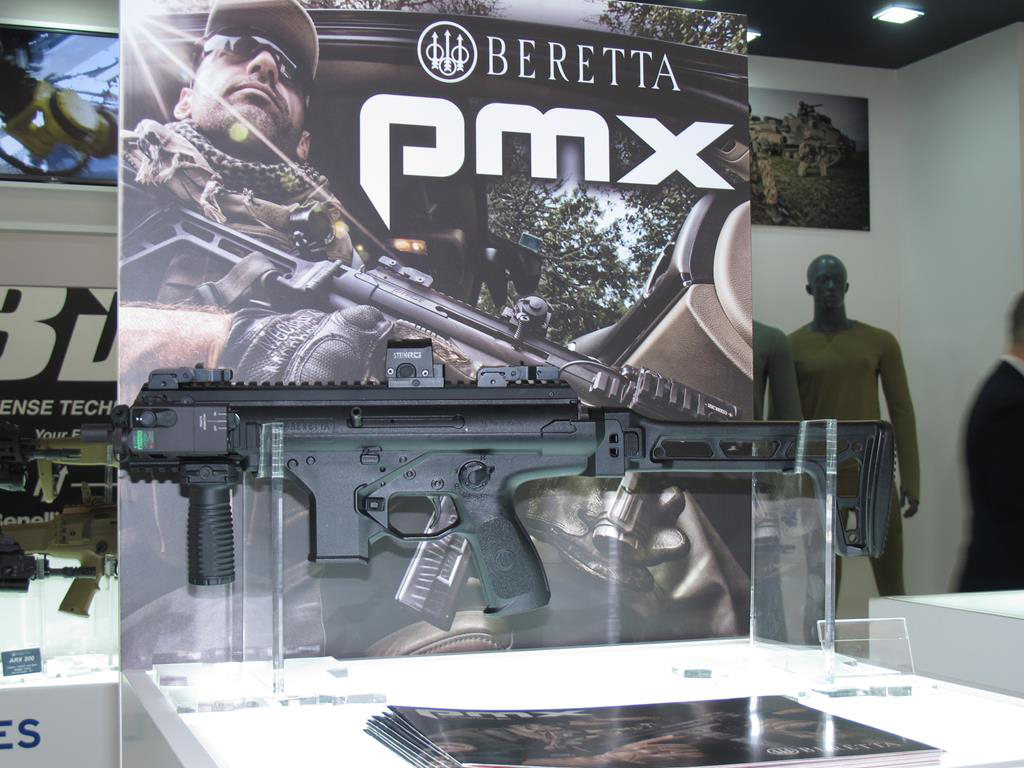 Somewhat similar from outside to its predecessor, the PMX is based on a blowback mechanism, but fires with closet-bolt rather than with open-bolt as the PM 12. It maintains semi-auto and auto firing modes, the latter with a rate of about 900 rounds per minute, ± 100, the rotation between semi and auto being of over 100° to avoid the police officer to switch inadvertently on the auto position during a firefight, the angle between safe and semi-auto being less than 45°. The mechanical safe is not the only one adopted; to avoid accidental discharge the PMX is fitted with an automatic firing pin block, which prevents the pin from moving forward unless the trigger is fully pulled. A fully ambidextrous weapon, the PMX features a 175 mm long cold-hammer forged barrel, the muzzle being fitted with three lugs for quick mounting a suppressor. Muzzle speed being 400 m/s ± 50 when using standard 115 grains NATO ball rounds, the polymer transluscent magazine hosting 30 rounds. Weight has been consistently reduced, the PMX weighing 2.5 kg without magazine compared to the 3.48 of its predecessor, also thanks to the extended use of polymers. The PMX has a folding stock, length being of 640 mm with extended stock and 418 with this folded. As standard folding iron sights are provided, installed on the top Picatinny rail, three shorter rails being available at 3, 6 and 9 o’ clock. Beretta should soon announce the launch customer, and looks beyond the police and paramilitary market, as it also considers those military specialties that need a self defence automatic and compact weapons. Comment: With the PMX, Beretta looks at the paramilitary market, but is also considering military forces as potential customers, as these might have need such an SMG as self-defence weapon. Deliveries should start in 2018.