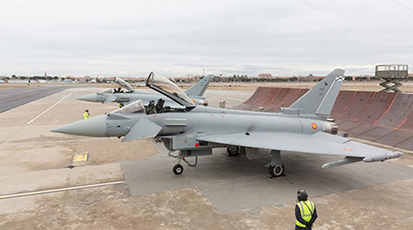 Madrid, 23 January 2018 – Airbus Defence and Space has delivered to the Spanish Air Force the first two Eurofighter Typhoons to be produced in the latest configuration with enhanced air-to-surface capabilities.

The aircraft were manufactured at the Getafe Final Assembly Line in the P1Eb FW (Phase 1 Enhanced Further Work) configuration which marks a key step in the overall Eurofighter evolution plan.

This same configuration is being retrofitted to in-service aircraft by other Eurofighter nations. It provides increased integration of a variety of air-to-surface weapons and enhanced targeting among other improvements.

Spanish procurement agency DGAM took delivery of the aircraft on 22 December and they were subsequently ferried to Albacete air force base to enter service. The remaining six of the 73 aircraft currently contracted by Spain will be delivered to the same P1Eb FW standard during 2018 and 2019.

Airbus Operating Officer, Military Aircraft, Alberto Gutierrez said: “The smooth introduction of these enhanced features is a vital element of Eurofighter’s evolution. It is a big tribute to the Airbus and Spanish customer teams that they achieved this on-time through effective collaboration and clearly demonstrates the rich manufacturing capability here at Getafe.”

DGAM Head of Aeronautical Systems Gen Léon Antonio Machés said: “The entry into service of these aircraft is the outcome of strong collaborative activity between our personnel and those of Airbus. It is an excellent illustration of the technical expertise that will support many more years of Eurofighter industrial activity in Spain.”

Airbus is a global leader in aeronautics, space and related services. In 2016, it generated revenues of € 67 billion and employed a workforce of around 134,000. Airbus offers the most comprehensive range of passenger airliners from 100 to more than 600 seats. Airbus is also a European leader providing tanker, combat, transport and mission aircraft, and is one of the world’s leading space companies. In helicopters, Airbus provides the most efficient civil and military rotorcraft solutions worldwide.

Eurofighter Typhoon is the most advanced swing-role combat aircraft currently available on the world market. Eight customers (Germany, United Kingdom, Italy, Spain, Austria, Saudi Arabia, Oman and Kuwait) have already ordered the Eurofighter Typhoon. With 623 aircraft ordered, Eurofighter Typhoon is currently the largest military procurement programme in Europe.  Its high technology strengthens the position of European aerospace industry in the international market.  The programme secures more than 100,000 jobs in 400 companies. Eurofighter Jagdflugzeug GmbH manages the programme on behalf of the Eurofighter Partner Companies, Airbus Defence and Space in Germany and Spain, BAE Systems in the UK and Leonardo in Italy, which are the most important aviation and aerospace companies in Europe.