Roketsan, the Turkish missile manufacturer champion, unveils at Farnborough its latest product, the Çakir, a cruise missile with an over 150 km range that can be launched from land, naval and air platforms. It is fitted with a 70 kg high-explosive semi-piercing blast fragmentation thermobaric warhead that, according to the company, makes it effective against multiple types of targets such as surface land and coastal targets.

When launched from surface platforms the Çakir is fitted with a solid fuel booster weighing around 55 kg, which brings its weight close to 330 kg. The weight of the missile is 275 kg, which corresponds to that of the air launched version. With booster, the Çakir is 4.1 meters long, the missile having a 275 mm diameter, the air-launched version without booster being 3.2 meters long. Lift is provided by two sets of cruciform wings while a set of cruciform actuators ensures manoeuvrability. The Çakir speed is comprised between Mach 0.75 and 0.85, propulsion being provided by the KTJ-1750 turbojet engine providing a 1,750 N thrust, designed and produced by Kale ARGE in Turkey.

To cope with GNSS-denies scenarios the Çakir is guided towards the target by multiple navigation systems that of course include GNSS with anti-jam capability to which Roketsan added an inertial navigation system, radar and barometric altimeters, and a terrain-referenced navigation system. The Çakir mission is programmed via 3D waypoints, a network-based data link ensuring man-in-the-Loop capability for target update, attack/re-attack for in-flight target of opportunity, as well as mission abort. In the final phase on-board seekers will ensure pinpoint accuracy; the Roketsan missile can be fitted with infrared and/or radar seekers.

The data link also allows inter-missiles communications, which give the Çakir swarming capabilities, ensuring maximum effectiveness through enemy defence saturation. The missile survivability is enhanced by the use of radar absorbing material on the airframe, as well by its super sea-skimming and terrain masking mission profiles.

The cruise missile can be launched by fixed and rotary wing aircraft, UCAVs (according to Roketsan a MALE-class airframe can carry up to four missiles), AUSVs, as well as tactical wheeled Land Vehicles, a 6×6 platforms typically carrying four missiles while bigger 8×8 vehicles can carry up to six. 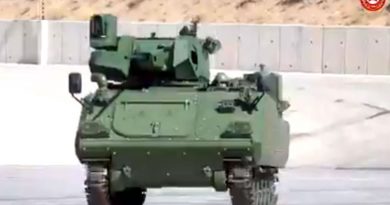