The CNIM Group and its subsidiary Bertin designs, develops and manufactures industrial solutions with high technological content and provides expertise, services and operating capability in the areas of defence and high technology.

Following the signature of the partnership agreement with Thales Alenia Space in April 2016, an initial design milestone was passed in March 2017 and things are looking very encouraging for the next stages of this unprecedented project, involving a solar-powered geostationary and stratospheric aerostat. CNIM is responsible for the most important mechanical components of the Stratobus structure, its two nacelles and the four structures that support its propulsion engines.

The CNIM Group and its subsidiary Bertin is one of the six industrial partners assembled by Thales Alenia Space to work on the Stratobus multi-mission autonomous drone project. Stationed at an altitude of 20,000 m above the Jetstream and air traffic, over its theatre of operations, in the lower reaches of the stratosphere, Stratobus will be positioned between aircraft and satellites. 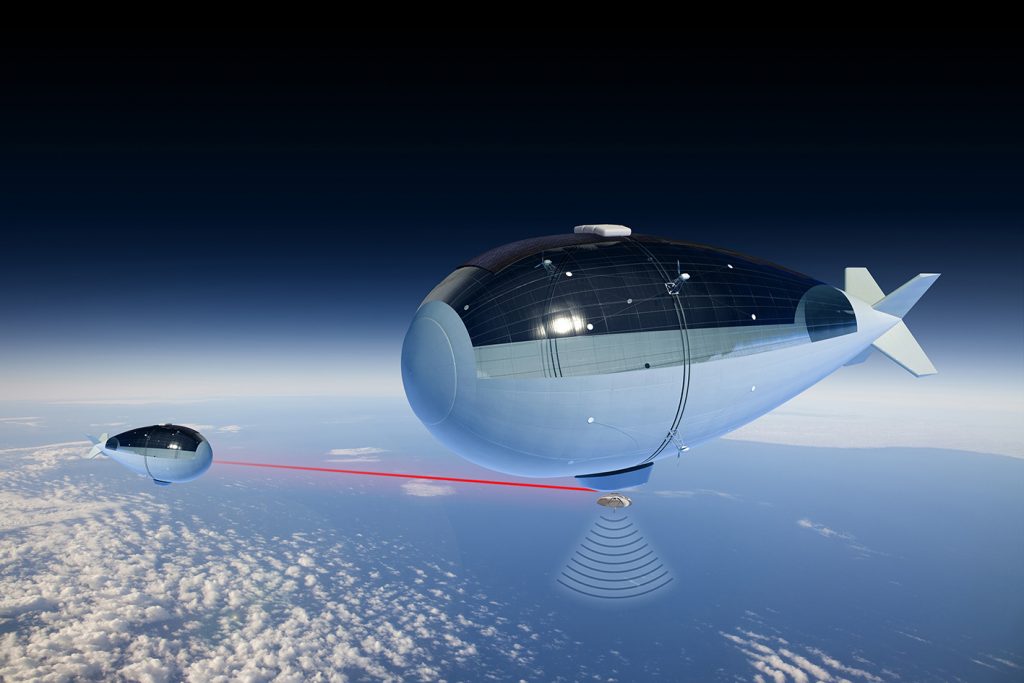 The CNIM Group is partnered with Thales Alenia Space to on the
Stratobus multi-mission autonomous drone project. (Thales)

The aerostat is designed for localised civil or military observation and surveillance missions, e.g. surveillance, detection of pirate ships, oil dumping and spills at sea, etc. It will bring the Internet to digital deserts, reinforce GPS in high traffic areas, analyse meteorological and coastal erosion data, and monitor beach cleanliness. It will help the authorities to manage natural disasters and fires. In addition to the more global coverage provided by satellites, its detailed regional coverage will help to monitor threats of all kinds.

The engine support structures, energy management component and communications and surveillance payload nacelles will be produced using an ultra-light, very high-quality composite material border. The seven metric tonne 110 m-long Stratobus will have to constantly battle against winds blowing at speeds of between 0 and 90 km/h, in order to maintain itself in a stationary position: this poses a serious technological challenge for CNIM, which is responsible for the design and production of the 3 structural units.

The Preliminary Design Review (PDR)] will take place in mid-2017 followed in 2018 by the Critical Design Review (CDR), which will provide a detailed definition so that actual production can be launched.