On 11 April in Toulon, DCNS delivered the FREMM multi-mission frigate Auvergne to the French Navy, as stipulated in the contract. This frigate is the fourth of the series ordered by 1 OCCAR on behalf of the DGA (French armament procurement agency). 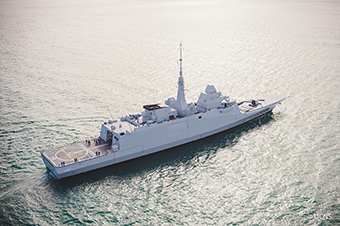 Delivery of the FREMM multi-mission frigate Auvergne is the result of a design and construction process managed by DCNS in close cooperation with the French Navy, DGA and OCCAR teams.

“The delivery of the FREMM Auvergne represents an opportunity to applaud the industrial and technological prowess of DCNS and its subcontractors. The frigate Auvergne illustrates our capacity to produce and deliver on time a series of front-line combat vessels to satisfy the needs of our client navies”, indicates Nicolas Gaspard, director of the FREMM programme at DCNS.

On completion, the FREMM programme will represent the construction of ten vessels on the DCNS Lorient site, of which eight for the French Navy. Six FREMM would have been delivered to the French Navy before the end of 2019, in accordance with the 2014-2019 military programming law. DCNS is currently completing the FREMM Bretagne, which was floated on 16 September 2016, and is pursuing the assembly of the FREMM Normandie. Furthermore, work has already started on the ninth FREMM in the series, the Alsace, which will be one of the two FREMMs with strengthened anti-aircraft capacities, whose deliveries are scheduled before 2022.