The Austrian manufacturers of the DA42 MPP, Diamond Aircraft displayed three all-composite aircraft for the first time at Le Bourget. These included the TerraStar, a multi-sensored DA42 variant optimised for the detection of unexploded ordnance (UXB). It is capable of flying at low altitudes, between 50-150 m at only 156 km/hr where the aircraft’s low noise and vibration levels, an innate stability reduces pilot and observer fatigue.

Flying at 100 m the track width covered by the sensors is equal to the DA42’s wingspan of 13.5 m. Trails of the TerraStar system were carried over disused live firing ranges in Austria to detect used shell in mid-2016 and two aircraft have been sold to a West African customer.

Making its public debut at Le Bourget was the DA62 MPP, a seven-seat development of the DA42. Powered by twin 134 kW Austro Engines AE300 diesel powerplants it is being offered in the ISR or maritime patrol aircraft (MPA) configuration. The engines are fitted with an on-top exhaust system to reduce noise and the heat signature making the aircraft virtually invisible to surface-to-air missiles (SAM) while the composite airframe reduces the radar cross section (RCS). 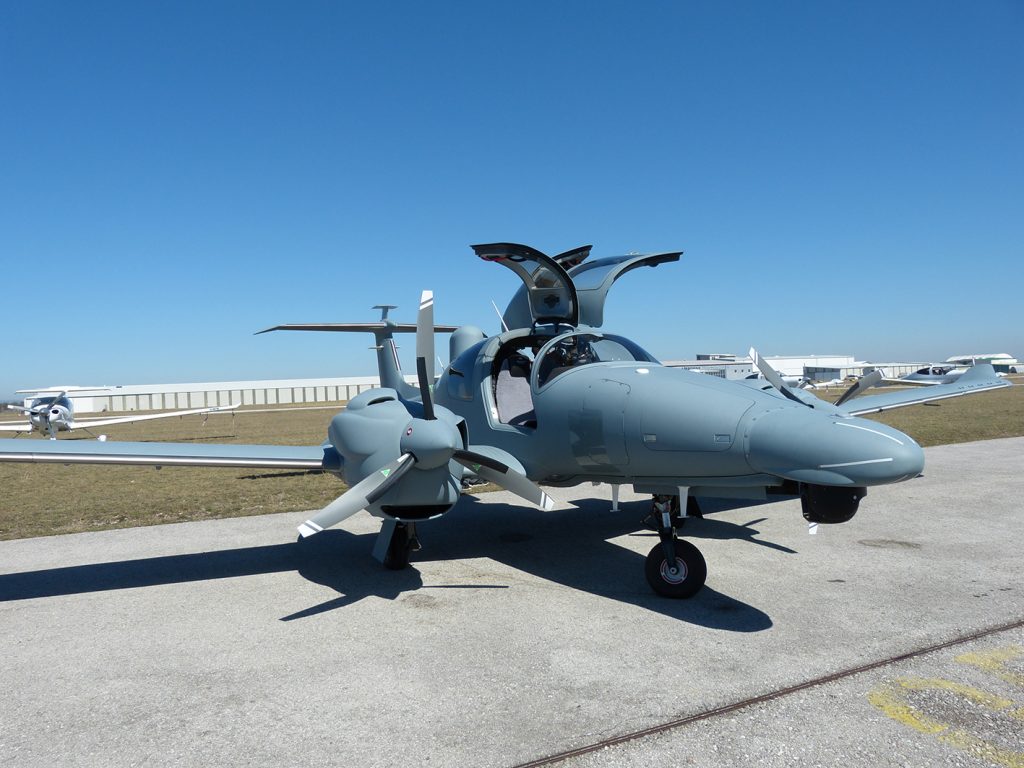 Making its public debut at Le Bourget, the Diamond DA62 MPP
is offered as a multi-sensor ISR of MPA platform. (David Oliver)

With a maximum speed of 352 km/h and service ceiling of 20,000 ft, it has exceptional range and endurance capable of flying up to 10-hour non-stop missions. It has a payload of up to 710 kg for the crew, mission equipment and fuel while the field-proven composite technology allows corrosion-free unlimited airframe lifetime.

The ISR variant of the DA62 MPP is equipped with the lightweight FLIR Star SAFIR 380 HD camera, a digital line of sight (LOS) bi-directional datalink and beyond line-of-sight (BLOS) Ku-band Satcom. It is fitted with the compact Garmin GWX 70 weather and the observer station is equipped with a Diamond in-house designed ABACUS 2.0 mission computer with a 17-inch full HD screen.

Diamond Aircraft’s other Le Bourget debutant was the Diamond Aircraft Reconnaissance Trainer (DART)-450, the first all-composite tandem, two-seat basic trainer with a sidestick and pneumatic ejection seats that made its first flight on 17 May 2016. The +7/-4G aerobatic aircraft is powered by 331 kW Ivchenko-Progress/Motor Sich AI-450S turboprop engine driving a five-blade MT-Propeller, and equipped with a GARMIN avionic system. The maximum endurance of the DART-450 is eight hours plus reserve. It will have a maximum speed of 250 knots.

Two prototypes have already flown and a third production standard DART-450 is in production. The aircraft will be offered with either the AI-450S or GE 500 engines, with optional Martin-Baker or Russian ejection seats. With a lead customer already signed, the first production DART-450 will be delivered in 2018.