Showcased for the first time in ST Engineering’s Aviation Cluster was the STINGER Intelligent Network Gun Equipped Robotics system. The system is under development as part of ST Engineering’s Future Soldier Solution and includes a quad-rotor unmanned aerial vehicle armed with the world’s lightest machine gun, the 6.8kg ULTRAMAX U100 with minimal recoil which enables it to be fired accurately in full automotive mode from a UAV. The systems can also include a laser-range finder with an accuracy of up to 300m.

In the Defence Cluster, ST Engineering displayed its Next Generation Armoured Fighting Vehicle (NGAFV). In partnership with Science Applications International Corp. it is competing to develop combat vehicle prototypes to meet the U.S. Army’s need as part of the Mobile Protected Firepower (MPF) programme. 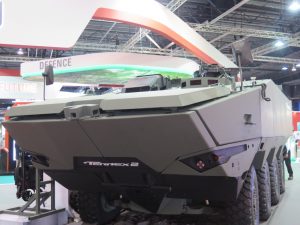 Based on ST Kinetics’ NGAFV chassis and CMI Defence’s Cockerill Series 3105 turret currently in production, SAIC will compete for an Engineering and Manufacturing Development (EMD) contract to build prototypes that incorporate a lightweight combat vehicle design while still providing mobility and lethality for Army units. Such a vehicle will enable freedom of movement and action, specifically for restrictive, urban operations but tailorable for full-spectrum combat environments. 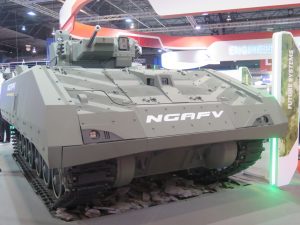 ST Kinetics, together with its teammate, Science Applications International Corp. (SAIC) has also moved into the Engineering, Manufacturing and Development (EMD) phase of the US Marine Corps’ Amphibious Combat Vehicle Phase 1, Increment 1 (ACV 1.1) programme in competition with BAE Systems.  During the EMD phase, SAIC and ST Kinetics and SAIC provide the US Marine Corps with 16 TERREX 2 that have been tested over the past year in competition with BAE Systems. The prime contract, awarded by the US Marine Corps to SAIC was worth US$121.5 million and the Marine Corps plans to downslelect one manufacturer in July this year with the vehicle to be operational by 2013.