Formerly a Detective Chief Superintendent in the London Metropolitan Police, in which he served for over 24 years, Richard Freeman is now the Senior Police and Security Adviser at the UK’s Department for International Trade, Defence and Security Organisation. 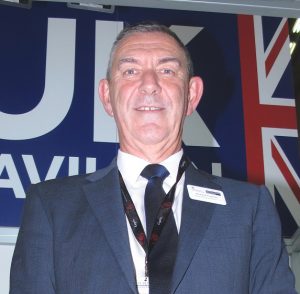 “Border surveillance and events management are the main topics we deal with, the World Cup that will take place in Qatar in four years time being an example,” he tells EDR Magazine in the DIT DSO booth at Milipol. He explains that DSO works with numerous countries to help them in developing their systems, in training and in ensuring the follow-up on products during their lifetime. Most companies present in the UK pavilion work closely with UK agencies, which gives them considerable credibility abroad.

Among the various fields in which Mr Freeman sees is the exploitation of Closed Circuit TV (CCTV) as one of the most promising sectors for quantum jumps in exploiting data. “In the UK we have a considerable experience; we started working with CCTV in the early 1970s, the first CCTV City centre having been established in London in 1972, and nowadays we have some seven million CCTVs around the nation. It is essential to establish a CCTV strategy, to develop systems to review images, which can be collected in up to 40 different formats, and to develop software to analyse images, something that allows significant reduction from days of footing to hours to allow officers to review only the images relative to their case,” he explains, adding that around 96% of crime investigations include some CCTV evidence. It does not come to a surprise that some companies present at Milipol in the DSO pavilion are specialised in this field.

“Another significant area of interest is border security, merging various technologies from satellite observation to unmanned ground sensors, as well as long-range radars and cameras.” Systems based on fibre optic cables linked to dug in unattended sensors allow one to detect, identify and classify movements and potential threats which represent some of the solutions. “We are also considering portable solutions, with a container hosting a ground radar, SATCOM and CCTVs, with solar panels providing power which could be a solution for the problems on small islands, or on very large areas, as they will be remotely monitored,” Freeman says.

Airport security is another major concern, “the aim being to avoid creating stovepipes generating great numbers of people concentrated in cramped areas, a perfect target for a potential terrorist.”
The four “P’s” Protect, Prevent, Pursue and Prepare are the mantras of UK counterterrorism strategy. Protecting is done in many ways, from controlling accesses to physical protection of buildings, Prevention means mostly dealing with potential radicalisation, Pursuing deals with post-event investigation, tracking suspects i.e. with CCTV, and finally Prepare which means amongst other things acceptance that we may have terrorist attacks, so developing procedures for confronting different types of emergencies. National security agencies also work closely with academia and industry to cope with all those aspects in order to remain at the cutting edge of technology, artificial intelligence and other such technologies being at the forefront of current developments.

The Gunpowder Plot of November 6th, 1605, in which a group intended to blow up the House of Lords during the State Opening of England’s Parliament, is considered the first terrorist event of the world, at least the first known, thus the UK has the primacy in this field. “We are quite expert in combatting terrorism and in mitigating its effects, and we are very keen to share our knowledge with our friends and allies,” Mr Freeman concludes, explaining that this can be done in various forms such as government-to-government agreements, and can include cooperation on procedures, legislation and equipment.