In April and May 2008, Algerian Air Force returned ten MiG-29SMT 9.19s and five MiG-29UB 9.53s to the RSK MiG company after finding out most of their parts were manufactured in early 1990’s. These MiG-29s were part of a $1.3 billion USD contract signed in mid-2006 for procurement of 34 MiG-29SMT/UBs. These MiG-29SMTs together with 11 more examples and all of the MiG-29UBs of the Algerian order found their way into 14th Leningrad’s Guards Fighter Aviation Regiment (14th GVIAP) service at Khalino, Kursk. They were used as a replacement for the Fulcrum As and Cs of the unit which had reached the end of their service life or had been grounded for airframe overhaul. In December 2009, the regiment was reorganized as 6963rd AvB, and a few months later as 1st Aviation Group of 7000th Aviation Base. 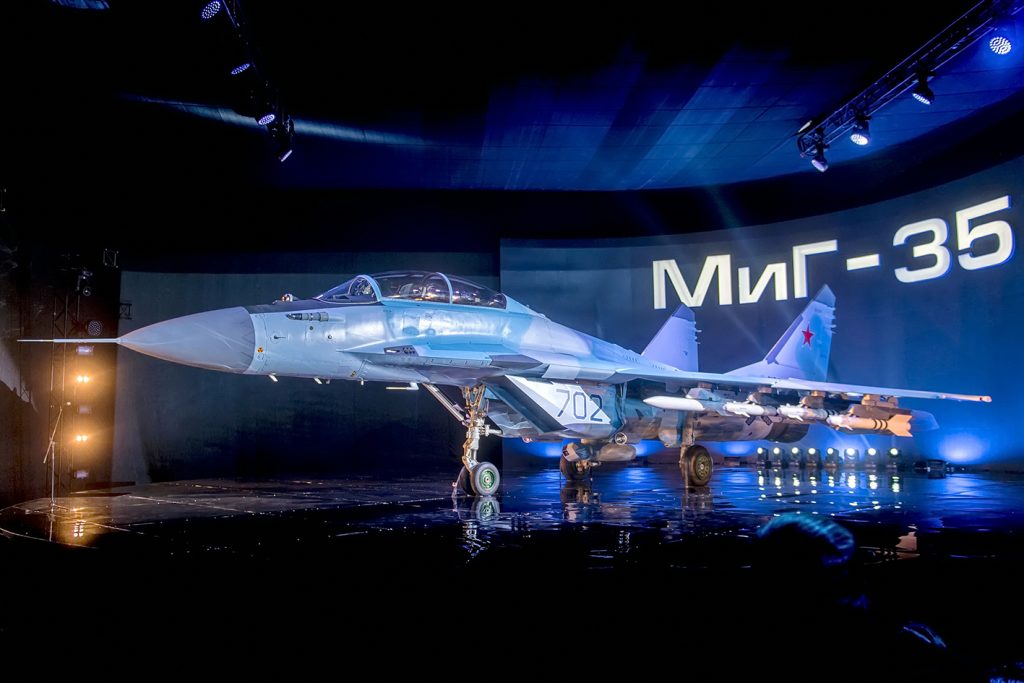 702 is the first MiG-35S prototype was unveiled by RAC MiG during an official ceremony at Lukhovitsy on 27th January 2017.

The MiG-29SMTs were procured by RuAF upon rejection of Algerian Air Force enabling the force to use them as a stop gap solution until procurement of the Su-30SMs for use by the 7000th AvB. These MiG-29SMTs boosted up the combat capability of the 14th GVIAP which was operating MiG-29 9.12 and 9.13 for Ground Attack besides interception since August 1986 when the first MiG-29 9.12 was delivered in Kiskunlacháza, Hungary. Despite their advanced avionic, and mission computer, the unit didn’t receive any precision guided weapons such as KAB-500Kr TV guided bombs or Kh-29T TV Guided missiles to use on the MiG-29SMTs, also No new R-77 active radar homing missiles were delivered and even for QRA, they used the R-27R and R-73E missiles.

The Khalino based MiG-29SMTs have been participant of most of Russian Air Force western military district exercises such as Ladoga-2014 which was hold in March 2014 during that, MiG-29SMT pilots were among total 50 fighter pilots including MiG-31BM and Su-27 pilots from Murmansk and Tver to practice air combat manoeuvres and air to ground missions such as live R-73E IR Guided AAM firing, rocketry with B-8M rocket launchers and bombing. This is while during the Aviadarts series exercises, the four to five MiG-29s of the 968th IISAP from Lipetsk-2 together with two or three MiG-29s of the 116th Training Center are participating mostly to increase or renew air combat manoeuvring skills and capabilities of their instructor pilots and cadets.

According to RuAF ten years program, the 1st Aviation Group of 7000th AvB (former 14th GVIAP) will completely be transitioned to the Su-30SM by mid-2018. Started from January 2017, a group of the MiG-29SMT pilots of the air base passed their type transition course. Finally the first pair of their Su-30SMs with 71 RED (c/n 1410) and 72 RED (c/n 1411) bort numbers which had been flown for first time on 18th March and 11th April 2017 and had been both handed over the air force on 27th May 2017 arrived Khalino air base during an official ceremony on 4th June 2017. According to RuAF officials, six batches of Su-30SM each consisted of two aircraft will be delivered Khalino AB until the end of 2017. After completion of their deliveries, most of the MiG-29SMT/UBs of the air base will be transferred to 3624th AvB Erebuni to take place of the last MiG-29 Fulcrum A/C/UB in combat use there.

There is a possibility that at-least one or two of the Khalino based MiG-29s will be transferred to 968th IISAP and also the 267th Flight Research Center of 929th State Flight Test Center (929th GLITs) at Akhtubinsk, Astrakhan Oblast. 929th GLITs has now a fleet of four MiG-29s consisted of a recently grounded MiG-29C with 05 RED b/n and RF-95933 serial number, two MiG-29SMTs including an upgraded 9.19R version (22 RED) and finally a MiG-29UB 9.53R with 21 RED b/n which were used for military stage of state acceptance trials of not only MiG-29SMT rather air to ground and air to air weapons of the airplane at the 929th GLITs’ gunnery range near Kazakhstan border. In recent years not only these MiG-29s rather the MiG-29KUB and MiG-35 prototypes were tested in this center for example the two seat prototype MiG-35 with 967 BLUE b/n logged most of its 18 test flights by Mikhail Belyaev Stansilav Gorbunov, the RAC MiG test pilot in this center and also launched R-77 active radar homing AAM and tested KAB-500Kr TV Guided bombs 2nd and 24th April 2010.