DSEI 2017, the Defence and Security Equipment International show took place from September 12 to 15 at London’s Excel Centre. With over 1,600 companies in attendance with 42 international pavilions, the show attracted more than 34,000 visitors including over 2,500 VIPs and some 300 programmed delegations. The exhibition was divided into dedicated capability zones; Air, Land, Naval and Security.

In the Royal Victoria Dock adjacent to the Excel Centre, seven warships were open to visitors and daily waterborne demonstrations were conducted. A full programme of more than 300 conference sessions took place in four theatres which included keynote addresses by government ministers and all four UKI Service Chiefs. These included the Secretary of State for Defence, Sir Michael Fallon, the Secretary of State for International Trade, Liam Fox, and the Minister for Defence Procurement, Harriett Baldwin.

There were, however, some discontent from the media, following these addresses when most of the programmed question and answer sessions were cancelled. It was suggested that the press should follow them on their tours around the exhibition and ask questions at the same time. This was not a practical solution and left the media less than satisfied.

Despite these problems, this year’s event was well organized by Clarion Events with security better handled by G4S Security with some of the long delays experienced in previous years largely avoided, although, on day three, visitors were suddenly asked for two sets of identification at the gates instead of one, with no warning.

In the Air Zone at DSEI 2017, there were two recurring themes – Aggressors and Counter-UAS concepts.

At DSEI the Saab Group launched a new variant of its Gripen multirole fighter. Gripen Aggressor, based on the proven Gripen C-series and is the ultimate platform for the adversary air combat training market. Saab claimed that it would bring a unique mix of high performance, mission flexibility and availability combined with a low life-cycle cost.

“There is a major difference in the capabilities provided by the aggressors on the market today and what the need is for the coming years. In order to train as you fight, you need to fly advanced combat tactics against peer and near-peer opponents like the Gripen Aggressor. Essentially world-class pilots need to train against world class opponents and that is the Gripen Aggressor”, says Richard Smith, head of Gripen marketing & sales at Saab.

Customised for the aggressor role, Gripen Aggressor has all the handling and flight characteristics associated with the Gripen C and its advanced sensor and datalink capabilities, but will not carry live armament.

An aggressor, or adversary, aircraft, are used to act as an opposing force in advanced military combat training. Aggressor squadrons use enemy tactics, techniques, and procedures to provide a realistic environment for the fighter pilots to train against. Saab sees potential for the platform as a high-level aggressor option within both the United States Air Force’s Adversary Air (ADAIR) and UK MOD’s Air Support to Defence Operational Training (ASDOT) requirements, and wherever users look to prepare pilots for the challenges of sophisticated modern air combat. 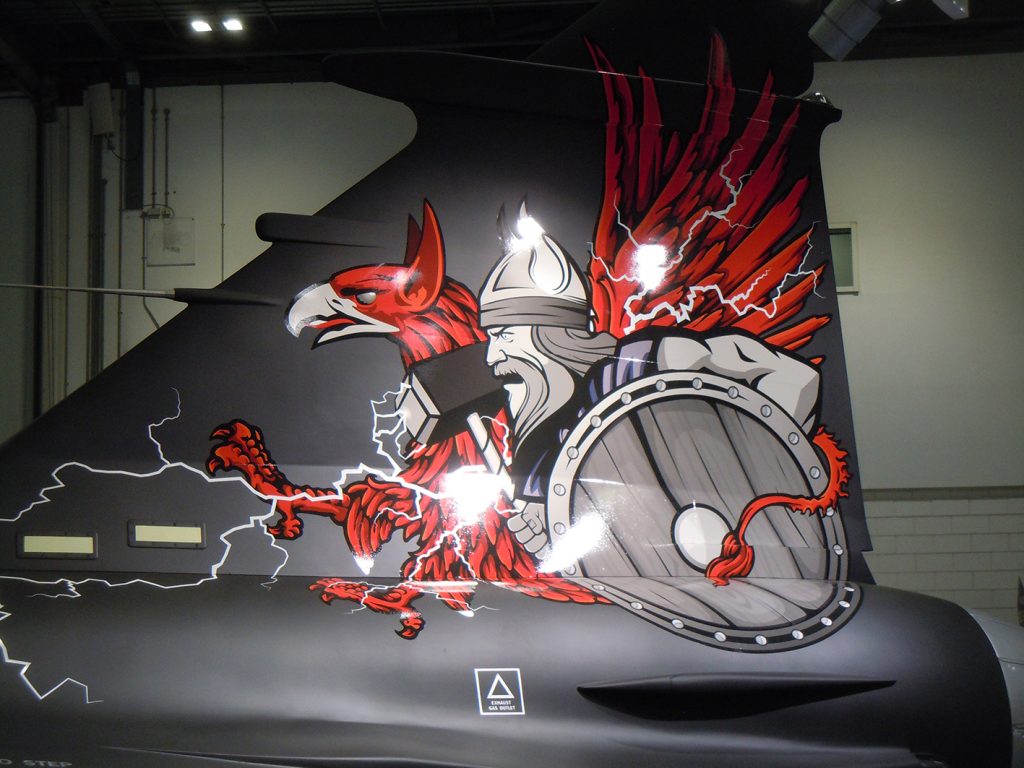 In another announcement at DSEI 2017, Leonardo teamed with Inzpire and Discovery Air Defence Services Inc. to develop and deliver a live air training solution for the UK MOD’s ASDOT programme. The companies will combine their capabilities, expertise and experience in live air aggressor training, air warfare training, Electronic Warfare and airborne systems integration to deliver a capable and scalable solution to support ASDOT’s live fly tactical training needs through the mid-2030s.

Leonardo is at the forefront of UK innovation in airborne systems and services and therefore an ideal partner for ASDOT. As well as delivering advanced technologies such as radars, sensors and electronic warfare systems to the British Armed Forces, Leonardo partners with the UK MOD to deliver training, services and support for the RAF on Typhoon and Tornado aircraft and on the UK Forces’ fleet of helicopters. providing advanced technology, training, services and support,

Inzpire works with the RAF Air Warfare Centre, RAF Typhoon Force, and Air Battlespace Training Centre at RAF Waddington to design and deliver large-scale live and synthetic operational training. The company has wide experience in live, virtual, constructive training research, development, and delivery in the UK. For ASDOT, Inzpire will act as “Red One” by producing, leading and executing the Aggressor plan. 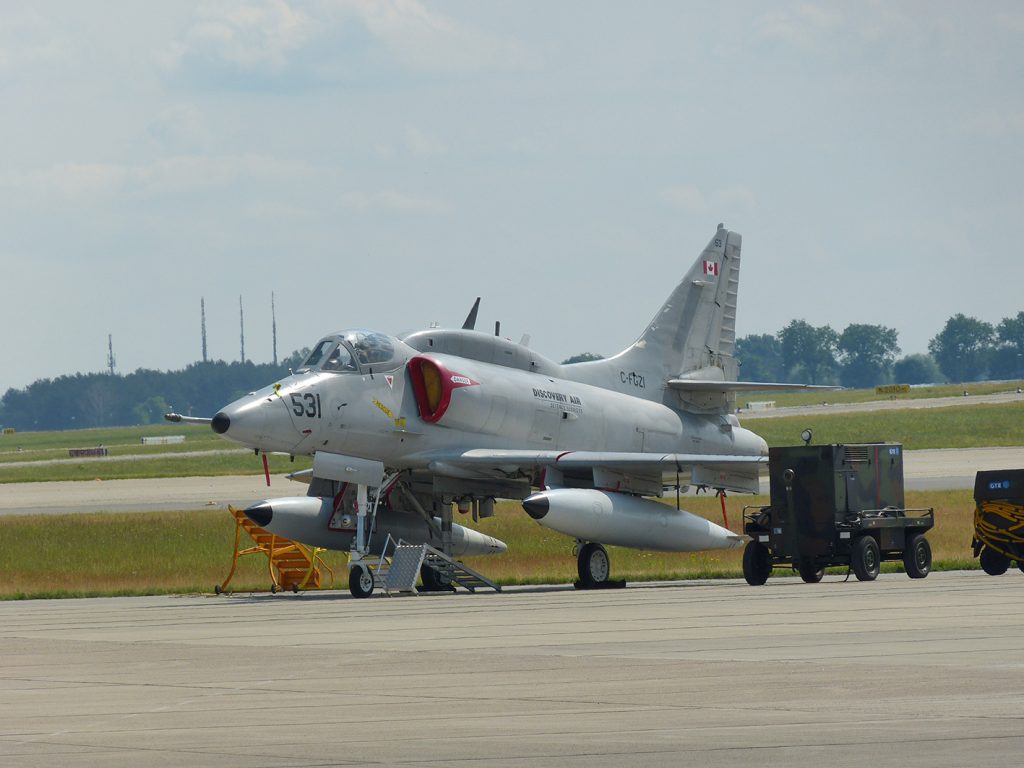 Under development by an MBDA-led consortium that includes QinetiQ, Leonardo, Arke, BAE Systems, Marshall and GKN, the Dragonfire system was shown for the first time at DSEI 2017. The system will be a 50kW class directed energy weapon designed to be used for short-range air defence, close-in protection for naval vessels, counter-unmanned aerial vehicle (C-UAV), as well as protecting friendly forces from mortar and artillery attack.

In 2012, MBDA demonstrated a 40kW laser that successfully hit airborne targets at a range of over 2,000m and it will build on this earlier trials in the area of coherent beam combining, a technique in which beams from multiple fibre laser modules are combined to form a single, powerful, high-quality beam. The weapon’s turret – which was unveiled at the London event, is the component responsible for ensuring that this beam hits its target.

According to the UK government Defence Science and Technology Laboratory (DSTL), which awarded the contract to the Dragonfire consortium, testing of the demonstrator will begin on UK ranges in 2018, culminating in a major demonstration in 2019. 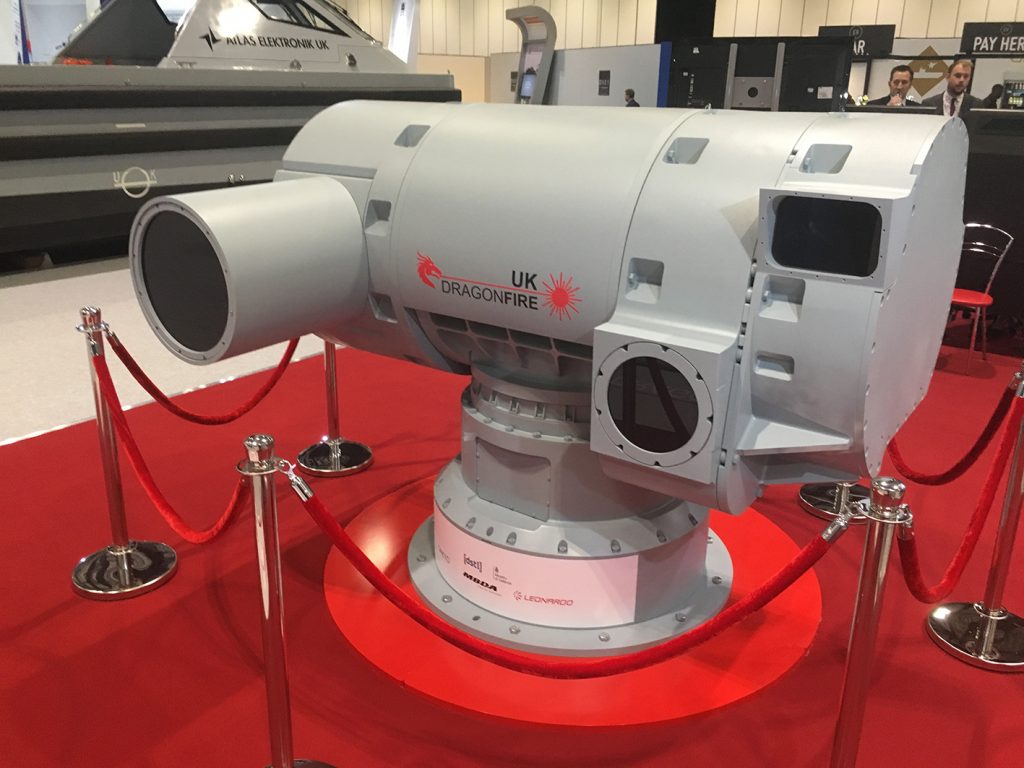 A counter-unmanned aerial system (UAS) concept was also presented by Thales at DSEI that was launched at this year’s Paris Air Show, designed to counter hostile or unauthorised unmanned aerial vehicles (UAV) penetrating airspace over borders, airports, and key infrastructure sites. Thales had already participated in a national French project for the development of a counter-UAV programme known as Angelas that aims to develop technology that utilises a range of sensors including optics, radar, acoustics and goniometry – to detect and identify UASs.

Michel Dechanet, product manager within the company’s innovative solutions product line, said that the Thales C-UAS system is focused on the threat posed by Class 1 UAVs weighing less than 25 kg, including some micro and mini-UAVs that can weigh less than 2 kg and have a radar cross-section of less than 0.01 m 2. Since they tend to fly slow, low, and among ground clutter, Dechanet said these can be a real challenge to detect.

Describing the latest demonstration conducted in April 2017 at a test area at a previous air defence base in Brittany, Thales explained how targeted UAVs had been jammed at ranges out as far as 1km although it conceded that it remained challenging to find, fix and neutralise fixed-wing UAVs because of their reduced radar signature.

Additionally, the solution has been integrated into a wider Ground Based Air Defence solution as well as potential to be integrated with more kinetic effectors to disrupt targeted UAVs including the company’s own LLM and Rapid Fire 40mm air bursting round.

The system offers two variations, hard-kill and soft-kill, with Dechanet promoting the company’s own Lightweight Multirole Missile (LMM) and the Rapidfire airburst munition which have been tried and tested. The solutions available can be chosen based on operational needs of the counter UAS.

Thales also admitted it was working on a directed energy solution to disrupt UAVs similar to that being developed by the MBDA consortium. 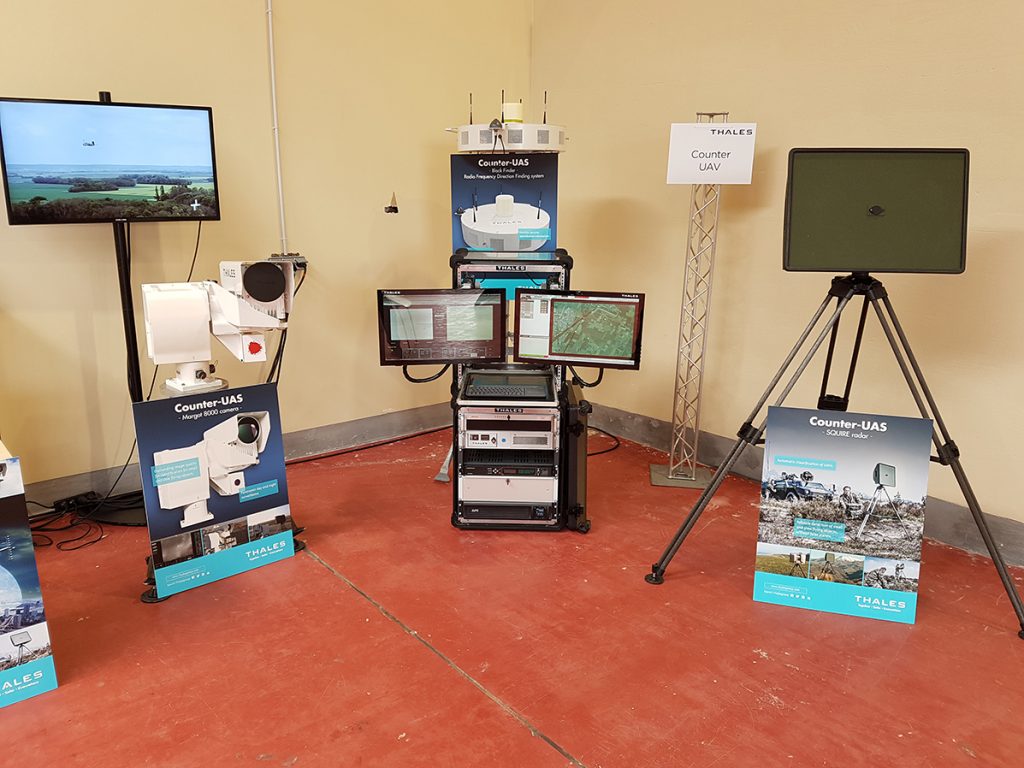 The Euroflir family is specially adapted to the wide variety of missions carried out by UAVs including law enforcement, homeland security, border and coastal surveillance. Euroflir 410 provides ultra-long-range observation and precision targeting capabilities thanks to high-definition sensors and advanced embedded functions, all in a single LRU The combat-proven Euroflir 410 is already used on Patroller UAV.

The combat-proven Euroflir 410 is already used on the Safran Patroller long-endurance UAV, as well as the NATO Helicopter Management Agency’s (NAHEMA) NH90 helicopters and the French Navy’s Airbus Helicopters AS565 Panthers, deployed in today’s most demanding theatres. 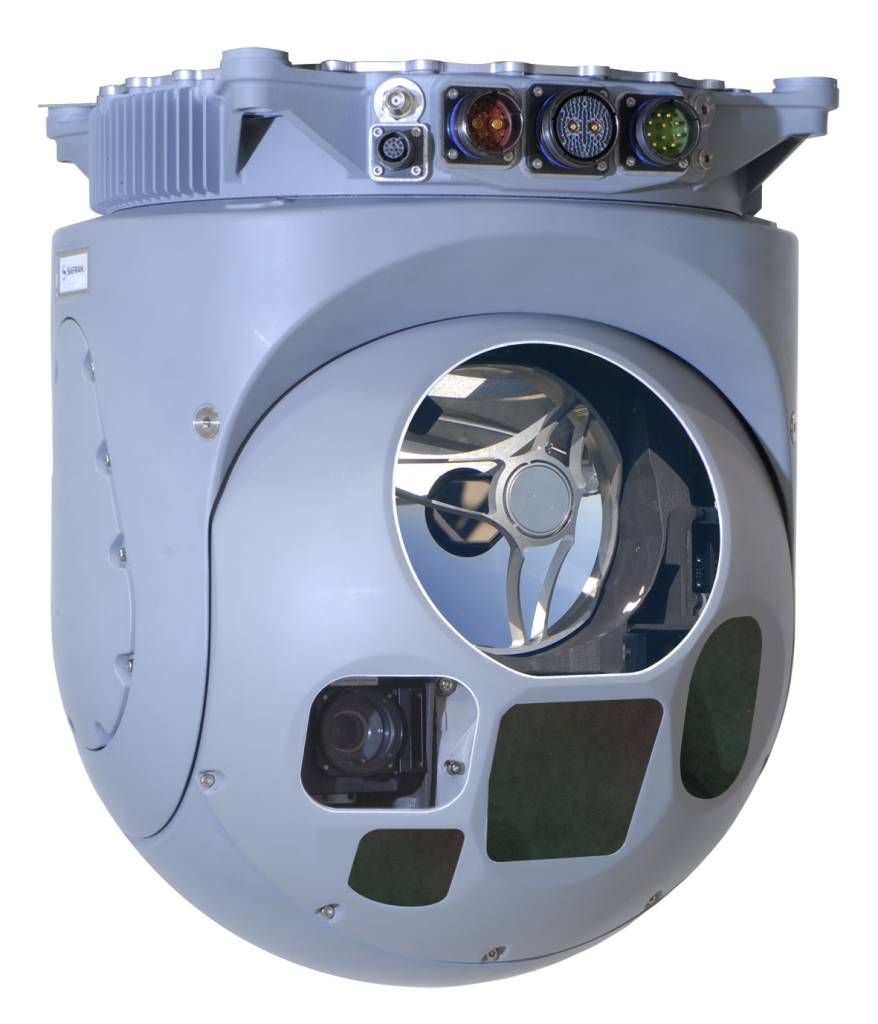 RUAG’s recently acquired UK-based cyber security company Clearswift Ltd Clearswift is a global cyber security company with a product portfolio in the areas of data loss prevention and deep content inspection, with more than 2,300 customers in over 70 countries. The acquisition of Clearswift increased the number of employees at RUAG’s new Cyber Security business unit, established at the beginning of 2017, to over 230 cybersecurity experts at locations in Switzerland, the UK, Germany, the USA, Australia and Japan.

At DSEI, Nick Hogg, Director of Technical Training, said that the company’s cyber training focuses on identifying weak spots introduced within the organization they are working with, in order to make staff aware of anomalies within their communications systems be they computers, tablets or smartphones, and question anything they think is out of the ordinary.

If necessary, the company can call on other specialists to respond to perceived or real cyber attacks. Research by Clearswift in July 2017 showed how attitudes to cyber security changed in the boardroom and among staff in the wake of the recent WannaCry attack. 600 senior business decision makers and 1,200 employees across the UK, US, Germany and Australia were interviewed following the events.

Coincidently, on the last day of DSEI, 15 September, Switzerland’s defence ministry announced that it had foiled a cyber attack by malware similar to that used in other global hacking campaigns, the government. The attack was detected in July by software that operated much like the Turla malware family.

Government specialists took countermeasures and an investigation is underway, while criminal charges have been lodged with federal prosecutors against persons unknown to them.