The facility in Bolzano that nowadays hosts Iveco Defence Vehicles HQ and main plant was inaugurated on 6 July 1937 by Mrs. Adele Lancia, as it was raised by Lancia which main plant were located in Turin. Initially a foundry, it soon became a comprehensive production facility, especially after WW II when beside the Lancia plant Officine Viberti created nearby a bodywork production plant. 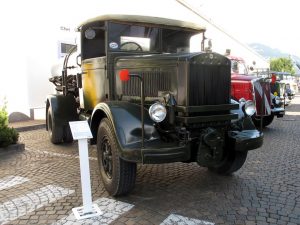