by Paolo Valpolini and Luca Peruzzi

Back in force at Le Bourget after having exhibited at low profile in 2015, Leonardo, then Finmeccanica, exhibited some new systems alongside with new versions of existing platforms. Among the first we find the Mirach 40, an integrated aerial target system that complements the current portfolio in that area. The bestseller until now has been the Mirach 100/5, used by many forces around Europe. Following customers requirements Leonardo Airborne & Space Systems developed a new target with the aim of providing a high performance system at an acceptable cost. The 100/5 not only has a non negligible acquisition and operating cost. Moreover, it has towed simulation system, an architecture that generates limitations in manoeuvrability. Leonardo ASS thus decided to develop a new smaller aerial target capable to integrate different payloads, such as active and passive RCS augmenters, IR augmenters, smoke generators, IR and chaff dispensers and miss-distance indicator radar. The Mirach 40 is 2.5 meters long, its fuselage has a 0.2 metres diameter and its wing has a 1.5 meters span, maximum take-off weight being 70 kg, compared to the 330 kg of the Mirach 100/5. It can carry a maximum payload of 15 kg, has an endurance of over one hour and reaches a maximum presentation speed of 200 m/s. It is capable to simulate sea-skimming missions at a 5 meters minimum height, but can reach a maximum height of 8,000 metres, and can carry out three-dimensional manoeuvres up to 6 g; in fact the system has already been tested up to this load factor but is designed to withstand 9 g manoeuvres. The current launch system is the catapult used for the bigger target, however Leonardo is looking for a smaller catapult to allow to put the whole system into a 20-foot container. The target can be recovered either on the ground or at sea using a parachute and impact reduction system, turn-around times being respectively of one and three hours. The Mirach 40 is in full testing phase, Leonardo planning to have it available to customers in three-years time. Potential customers are being considered in southern Mediterranean as well as among northern European navies that often train and deploy into the Mediterranean, the replacement of the systems in use by the Italian PISQ joint firing range being obviously one of the company targets. 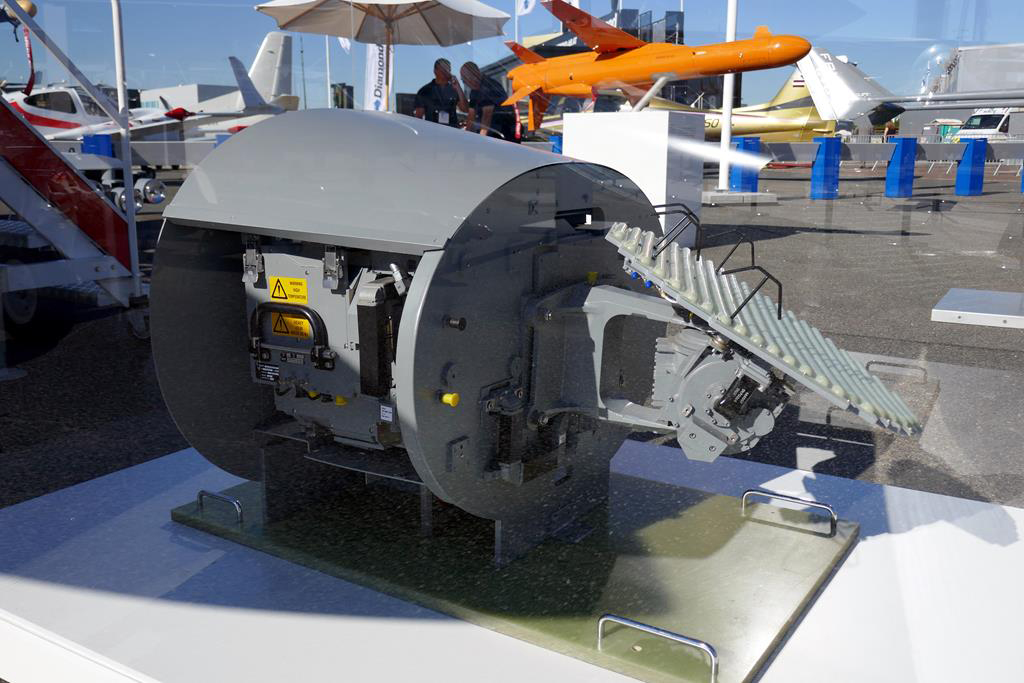 The Ultra Light version of the Gabbiano radar will be available also to small UASs. (photo L. Peruzzi) 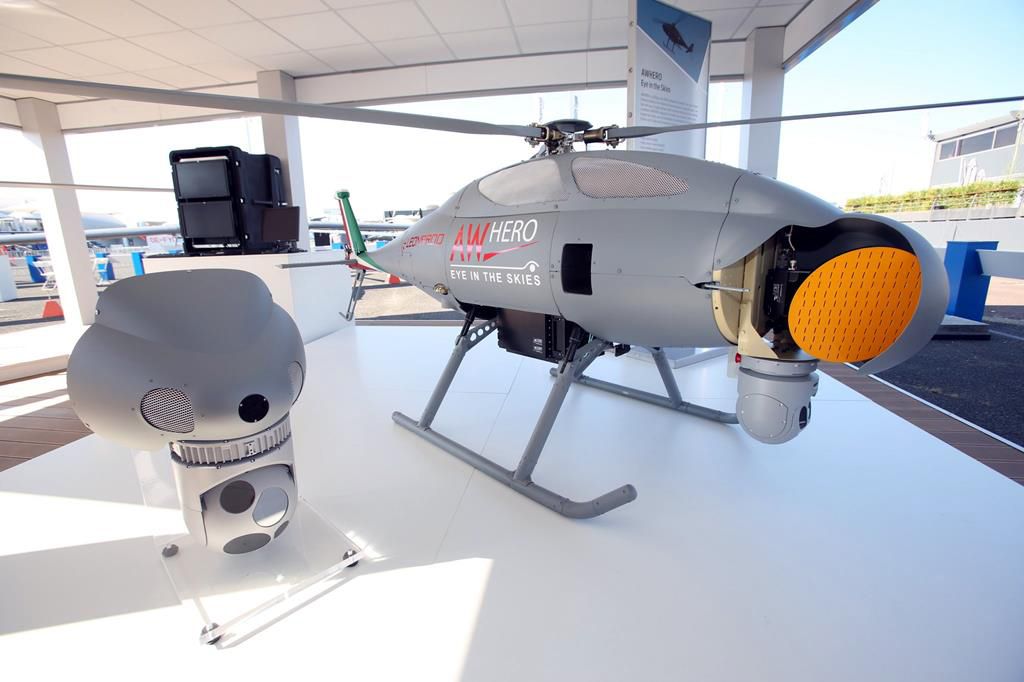 The HERO rotary wing UAS by Leonardo Helicopters was exhibited at Le Bourget in its latest configuration. (photo Leonardo) 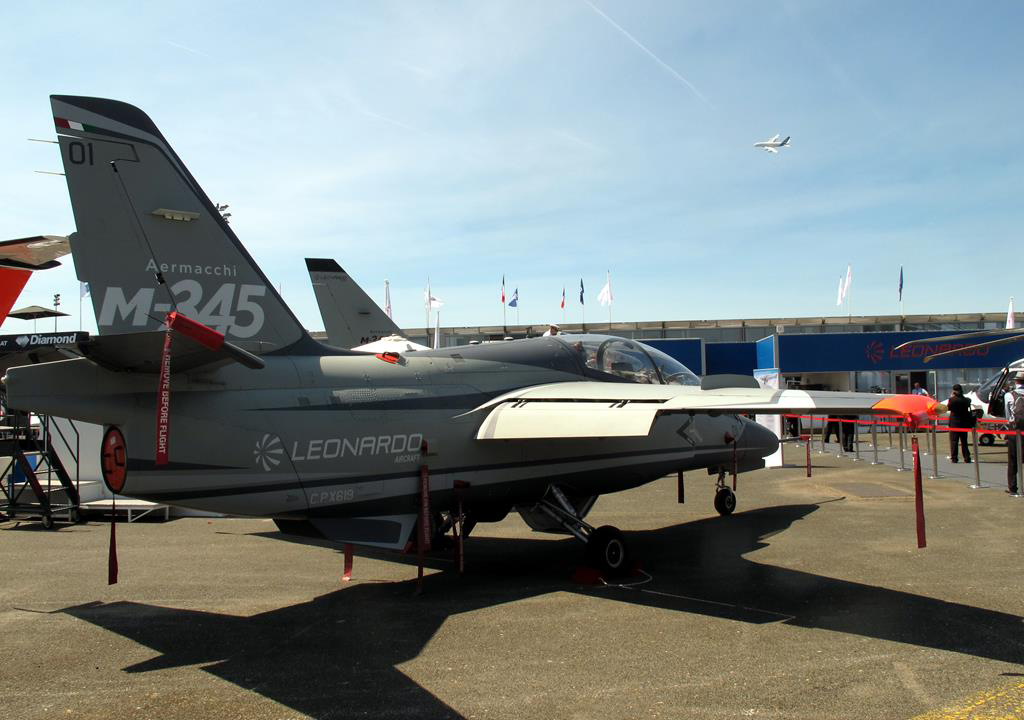 A new sensor for mini and small UAVs was unveiled in Paris, the Gabbiano Ultra-Light, an X-band radar made of two elements, the 12” antenna with a ± 90° surveillance capability, and the Remote Terminal Processor, weighing in total 24 kg. It provides a 160 NM maritime surveillance capability, is capable to track while scan over 200 targets, and features High resolution imaging and target recognition modes. At Le Bourget the Gabbiano Ultra-Light was visible installed on the latest version of the Hero rotary wing UAV unveiled by Leonardo Helicopters, which is expected to fly in Q3 2017. Based on potential customers requirements, it features a larger 4-meter diameter main rotor and enhanced heavy fuel engine offering an MTOW of 205 kg (vs 150 kg of the previous version) and an endurance of six hours with a 35 kg sensors payload.

As for manned aerial platforms Leonardo Aircraft exhibited in Paris its T-100 proposal for the lucrative US training aircraft contract, as well as the M346FA, the fighter attack version of the M346 twin-jet trainer aircraft already adopted by Italy, Singapore, Israel and Poland. Leonardo will submit all required flight data for its T-100 within the US Air Force’s 28 June deadline, the proposal going head-to-head against Lockheed Martin’s T-50A and a Boeing solution custom designed for the USAF contest. The Leonardo T-100 will be made in the US with lots of US content, Honeywell providing the F-124 engines and CAE the integrated ground based training system; if Leonardo’s bid will be successful, the T-100 will be assembled at a new facility at Tuskegee, Alabama. At Le Bourget Leonardo also provided details on the latest and full combatant version of the M-346. It will feature an enhanced avionics suite with Grifo-346 optimized radar and full weapon load capabilities, with seven loading stations. This ranges from air-to-air to air-to-ground weapons, including MBDA Brimstone and Marte ER anti-ship missile. The Fighter Attack version alongside the dual-role Fighter Trainer is being proposed for customers worldwide, in addition to aggressor and companion training services. 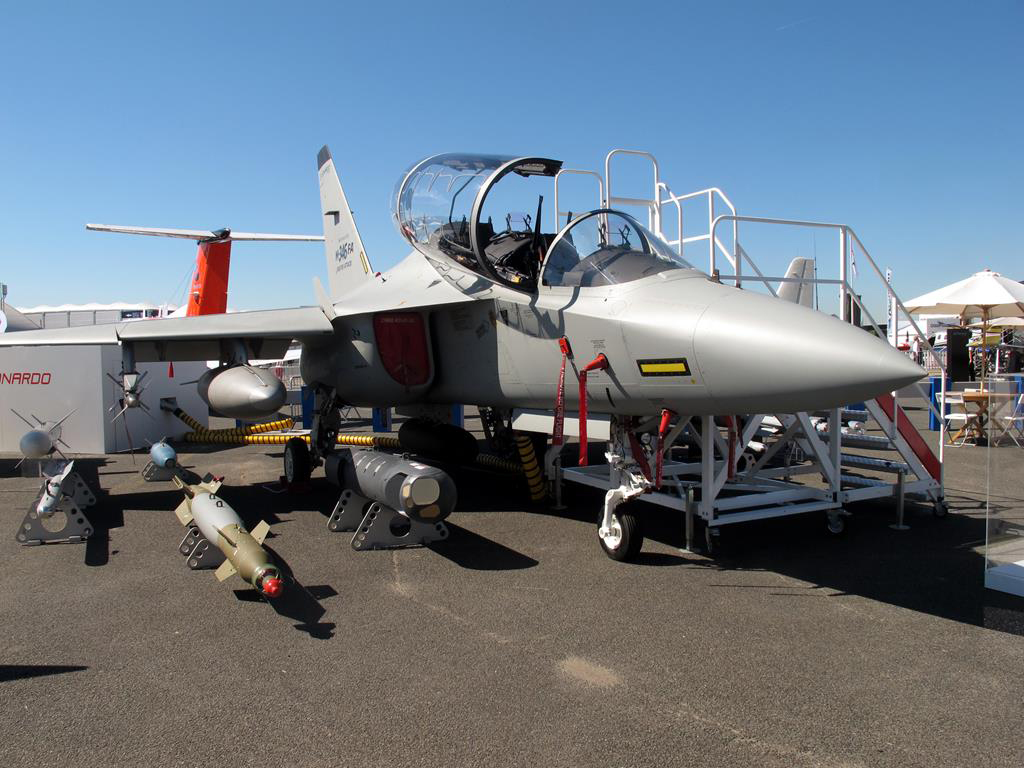 The M346 in the Fighter Trainer version; the fighter attack version will have seven loading station,
an enhanced avionics and will be equipped with the Grifo radar. (photo P. Valpolini) 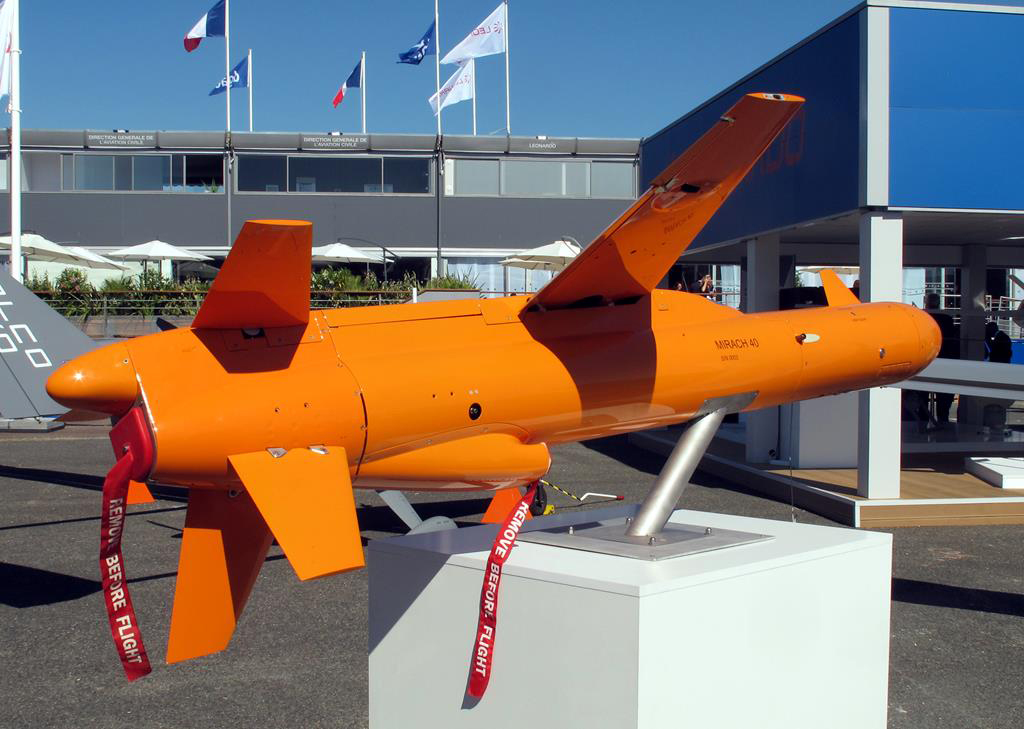 The last target drone developed by Leonardo is the Mirach 40, exhibited in a half scale model at le Bourget. (photo P. Valpolini) 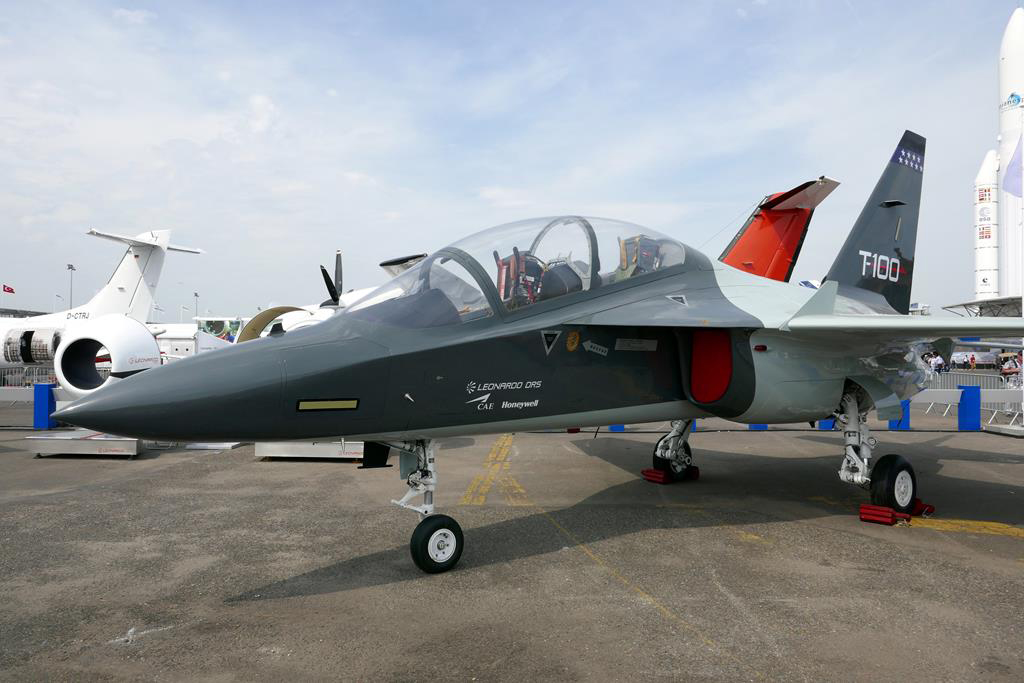 Leonardo is bidding for the T-100 USAF contract with a derivative of its M346 LIFT already in service
in Italy, Singapore and Israel, and soon in Poland. (photo L. Peruzzi)

Another aircraft that drew a lot of interest was the M345 basic trainer. It was the first time that the aircraft was on display following its maiden flight that took place on December 29 last year. Propulsed by a Williams FJ44-4M-34 turbofan, it can reach 380 kts at sea level has a 5,200 ft/min rate of climb and a +7g/-3.5g limit load factor. Costs comparison studies show that the M345 acquisition and operating costs are comparable with those of high performance turboprop aircraft, with considerable advantages on the training side, as it is capable to reach 390 knots, around 50% more than a turboprop, and to carry out basic fighter manoeuvres since inception, allowing download of part of the missions usually carried out on a lead-in fighter trainer, a further cost-reduction element when considering the overall training cost of a fighter pilot. The first pre-series aircraft is expected to be available by late 2018, the first series M345 being expected one year later. This will be part of the first batch of five aircraft ordered by the Italian Air Force to replace the MB-339A, the overall requirement being for 45 M345. Leonardo Aircraft announced that two more nations selected the aircraft, the company being confident to announce one of the contracts before year end. In Paris numerous delegations, some of them unexpected, showed considerable interest for the M345.