By the end of 1991, almost 1,200 single-seater MiG-29 Izdeliye 9-12s and 9-13s, as well as 200 MiG-29UB Izdeliye 9-51s, were manufactured with majority entering in service of Soviet Air Force and Air Defense Force. It was planned to retire the old Product 9-12s and replace them with modern MiG-29M product 9-15 which its first prototype had been flown on 24th December 1984. This aeroplane was extensively upgraded to have extended range and improved working conditions for the pilot, as well as increased its capacity for the air to ground missions especially via the use of precision guided air to ground missiles and bombs. Its new radar also was providing the capability of launch and use of more advanced R-77, R-27T, R-27RE and R-27TE AAMs. 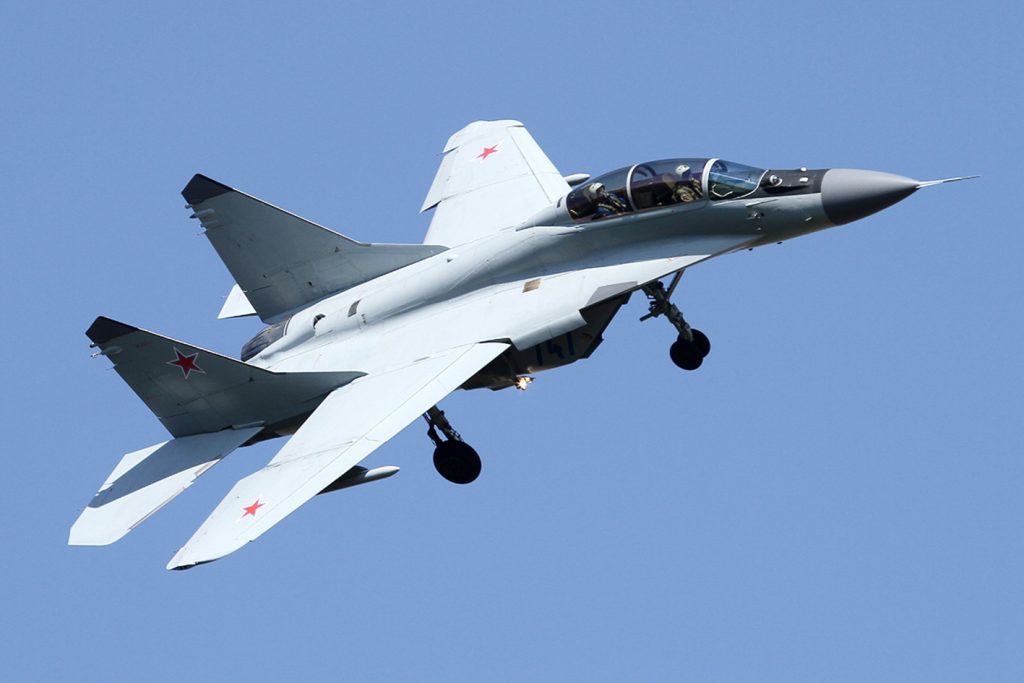 MiG-29M and MiG-29SM (The MiG-29S with MiG-29M air to ground capabilities, fire control system, avionic and other elements) projects were ended in favour of the MiG-29SMT project in late 1990’s. Despite the cancellation of the MiG-29M program, RAC MiG developed its twin seat version, named MiG-29M2 which flew for the first time in 2002. On basis of the first MiG-29M2 prototype, a new 4+ Generation fighter aeroplane was born, which was later designated as MiG-35.

First MiG-35 demonstrator aircraft was built from the MiG-29M2 No.154 BLUE in 2006. In late 2006, it was equipped with a demonstration model “Zhuk-AE” AESA Radar developed by Phazotron NIIR Corporation. The variant FGA-29 of the radar installed on the MiG-35 had a 575mm antenna and 680T/R modules with 120km detection range for 3m2 RCS targets which was increased later to 148km with 40km for the targets with background of land with ability to detection and track of 30 targets and engaging six of them simultaneously via use of R-77 Active Radar Homing AAM, R-27R1/ER1 Semi-Active Radar Homing AAMs, and R-73E, R-27T1/ET1 IR homing AAMs.

In-order to not only reduce complexity of its manufacture rather to reduce the costs, it was planned to use unified platform and front fuselage for both Russian Navy and Russian Air Force future MiG-29s, therefore the Izdeliye 9.41 and Izdeliye 9.47 fuselages were used as airframe platform for development of the Russian Navy and Russian Air Force MiG-29K/KUB and MiG-35 respectively. This new product had spacious and reformed nose section providing enough space to house the more powerful “Zhuk-AE” FGA-35 with 688mm diameter antenna with a maximum detection range of 250km with the ability to track 30 targets and engaging 8 of them simultaneously.

First standard MiG-35 (single seater) prototype with product 9-61 fuselage and first MiG-35D (twin seater) prototype with product 9-47 fuselage (similar to MiG-29KUB) were made from the first MiG-29KUB prototypes with 961 and 947 BLUE b/n. They were demonstrated to Indian Air Force authorities during Indian MMRCA tender in 2009 but were reconfigured back to MiG-29KUB. 947 BLUE was lost in an accident killing its test pilot on 23rd June 2011.