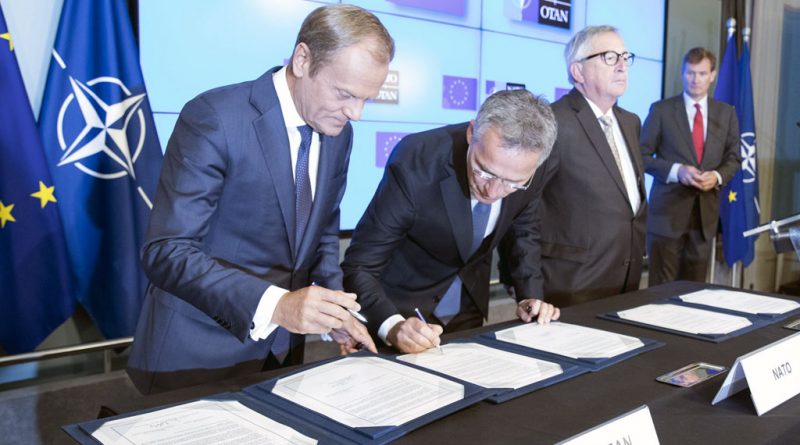 NATO Secretary General Jens Stoltenberg, European Council President Donald Tusk and European Commission President Jean-Claude Juncker met in Brussels on 10 July 2018 to sign a new Joint Declaration on cooperation between NATO and the European Union. “Facing a complex and uncertain security environment, we must work together to keep our nations and citizens safe. And that is exactly what we are doing,” said Mr. Stoltenberg.

The Declaration, which comes two years after an initial agreement made in Warsaw, states that NATO and the European Union are strengthening cooperation in a range of areas, including military mobility, counter-terrorism, resilience to chemical, biological, radiological and nuclear-related risks, and promoting the women, peace and security agenda. The two organisations have already stepped up cooperation in recent years, including on maritime security, countering hybrid threats and fighting terrorism. NATO and the EU now exchange real-time warnings on cyber-attacks, participate in each other’s exercises, and work together in responding to the refugee and migrant crisis.

The Declaration welcomes the EU’s efforts on security and defence, which are complementary and not an alternative to NATO. “We… need to ensure the fullest possible involvement of non-EU Allies in our cooperation and avoid creating new barriers,” said Secretary General Stoltenberg, recalling that after Brexit, 80% of defence spending in NATO will come from non-EU Allies.

President Tusk and President Juncker will attend two meetings at the NATO Summit, which starts in Brussels  on 11 July.