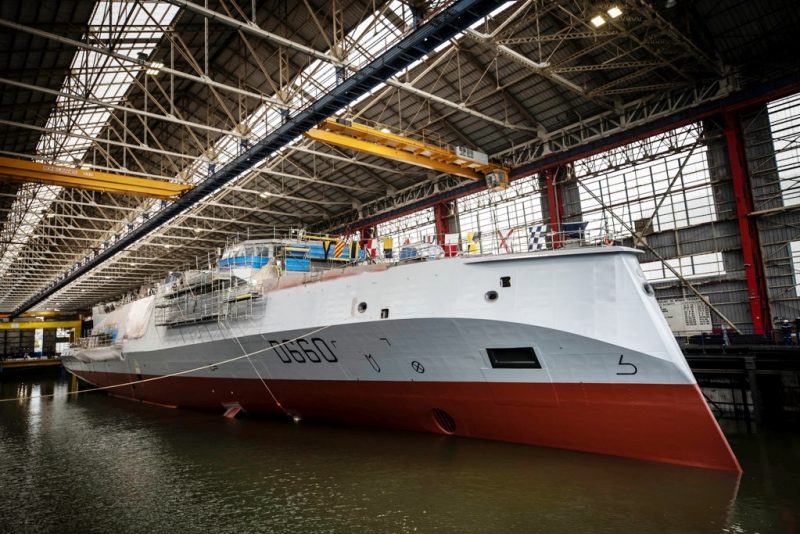 On Monday 7 November, the first defence and intervention frigate ordered by the French defence procurement agency (DGA) and destined to the French Navy was floated out in Lorient. Named Amiral Ronarc’h, this frigate will be delivered in 2024.

The ceremony took place in presence of Sébastien Lecornu, French minister of the Armed Forces, and his Greek counterpart, Nikolaos Panagiotopoulos.

During the ceremony, Pierre Eric Pommellet, CEO of Naval Group, said: “We are proud to be here today to mark this new milestone in the industrial production of the first defence and intervention frigate for the French Navy. These latest generation ships bring together the best of French naval know-how. The Navies operating them with benefit from a high-performance, resilient ship,

capable of dealing with threats that are constantly evolving, thanks in particular to the use of the most modern digital technologies. Naval Group remains committed to offering its customers the best of its know-how, at the service of their sovereignty.”

The first sea trials will begin in 2023 and the ship will be delivered in 2024. The remaining four ships of the series will be delivered until 2030. During this period, Naval Group will also produce three FDI frigates for the Hellenic Navy, with a fourth currently planned as an option.

A local and national industrial performance Thanks to the investments made by Naval Group, the site of Lorient has a modern industrial infrastructure that enables it to meet the technical and technological challenges of designing and building naval vessels in series. Thanks to this industrial organisation that optimises construction times, Naval Group is able to deliver two ships per year at its Lorient site from 2025.

To deliver these frigates with the required military performance, Naval Group mobilizes a wide range of skills. Some of them are very specific and rare and are often the result of a long or even very long acquisition: sheet metal carpenter, formator-straightener, hull welder, pipe fitter…

To ensure the sustainability of these cutting-edge skills in the service of naval programs, Naval Group promotes the recruitment of young talents and has recruited almost 500 work-study students and over 1500 new employees since the beginning of the year.

The FDI program reinforces the technological lead of the French naval industrial base. The program supports employment in the shipbuilding industry throughout France and, more particularly, in Lorient. At Naval Group, more than 1,200 people are working full time on the programme with more than 400 subcontractors. The FDI program involves a large number of French and Greek partners, including Thales and MBDA.

The FDI is a high sea vessel. Multipurpose and resilient, she is capable of operating, alone or within a naval force. She offers capabilities for all types of warfare: anti-surface, anti-air, antisubmarine and as well as for special forces projection. Bringing together the best of French naval technologies on a compact platform, the FDI is a powerful and innovative frigate, designed to meet the evolution of threats.

Designed and produced using the latest digital tools, FDI is the first frigate to benefit from a digital architecture that will allow her continuous adaptation to technological and operational evolutions.

As a result, the FDI will be able to address current and future threats and to handle always more data.

The FDI will be the first French frigate natively protected against cyber threats, with two data centers virtually accommodating a great part of the ship applications. The FDI introduces the concept of a dedicated system for asymmetric warfare. This system will enable the coordination and conduct of the fight against small and close air and surface threats, including booby trapped boats.

Strongly armed (Exocet MM40 B3C anti-surface missiles, Aster anti-air missiles, MU90 antisubmarine torpedoes, artillery), the FDI is able to embark simultaneously a helicopter (10 tons class such as NH90) or the future Joint Light Helicopter and an unmanned aerial vehicle (up to 700kg). She can also receive a Special Forces detachment with their two commando boats. They are equipped with the new generation Seafire radar with four fixed panels, developed by Thales, which, combined with the missile delivery system, offers unmatched area defence capabilities. 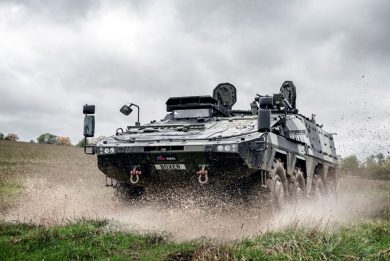 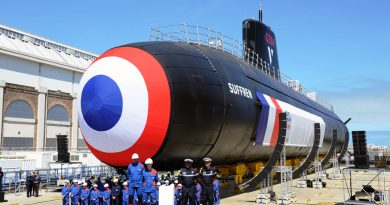 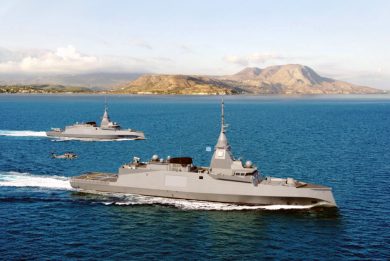 Thales onboard the Greek Navy Defence and Intervention Frigates