On 27 January 2017, during an official ceremony at Lukhovitsy, near Moscow where the No.1 Production Complex of RAC MiG is located, the first MiG-35UB prototype which had been first flown in December 2016 was unveiled to public a day after RAC MiG head of flight testing, Chief test pilot Mikhail Belyaev had reported directly to President Vladimir Putin on the completion of successful initial flight tests if the first UB or combat trainer version of MiG-35. 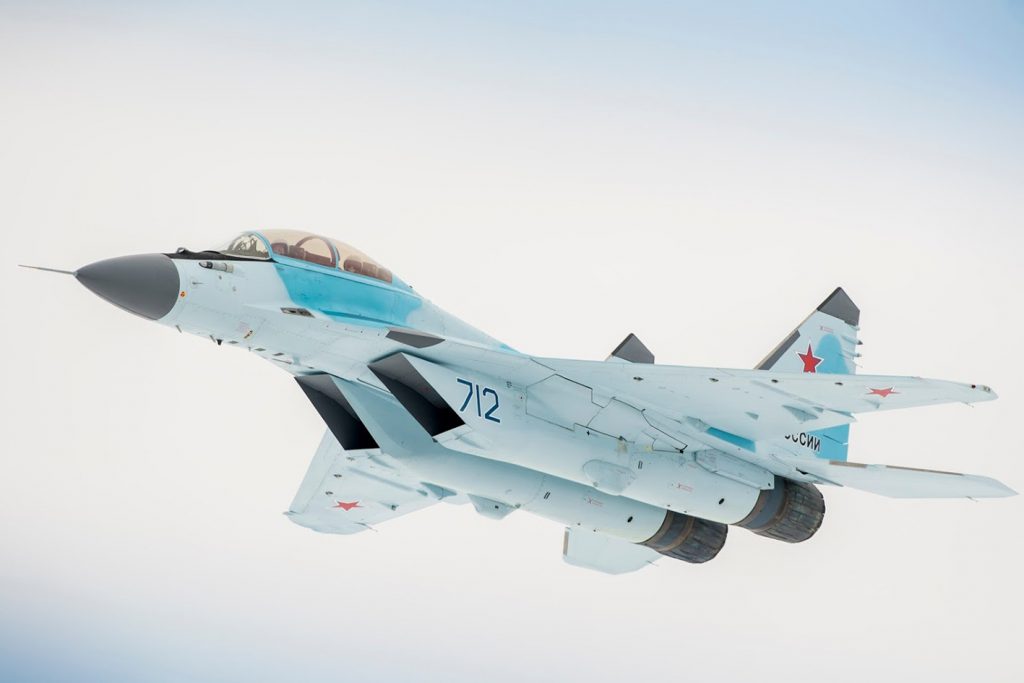 The MiG-35UB with 712 BLUE bort number, is a dual-seater is a slightly modified version of the MiG-29KUBR.

In that day, the MiG-35UB with 712 BLUE b/n had 10 minutes demonstration flight for defence attaches of 30 countries present in the ceremony. During the ceremony, Gen. Viktor Bondarev, Commander-in-Chief of the Air Force branch of the Russian Aerospace Forces finally confirmed that upon the end of the joint state-tests of the MiG-35 a contract for 30 out of total 170 MiG-35s planned to be procured for RuAF will be finalized with first deliveries in 2019.

Back in 2015, after several years delay, the MiG-35 program was renewed following to the needs of Russian Ministry of Defense for a complimentary light MRCA for the heavy Su-30SM and Su-35S fleet in 2020’s leading to the construction of two new standardized MiG-35 prototypes on basis of the first MiG-35S and MiG-35D prototypes. A single seat and a twin seat have received 702 and 712 BLUE bort numbers respectively. These prototypes are manufactured on Izdeliye 9.41SM and 9.47SM fuselage platforms which are exactly similar to the MiG-29KR/KUBR’s but slightly modified.

According to the RAC MiG General Manager, Ilya Tarasenko, the new MiG-35 prototypes are a totally renewed version of MiG-35, a technically new product featuring advanced construction materials, longer lifetime [6,000 hours or 40 years] and advanced avionics. According to RAC MiG, the 702 BLUE and 712 BLUE have differences with 741 and 747 BLUE, the MiG-29M and MiG-29M2 prototypes. According to the UAC general designer, Sergei Korotkov, the main difference between these two new prototypes and the previous ones is the use of a more advanced integrated electro-optical system. Also UAC president, Yuri Slyusar added that the new MiG-35 prototypes have a modern laser system.

RAC MiG still strongly wants to take part in Indian MRCA tender with the new MiG-35 prototypes. “MiG-35 -is an interesting product for the Indian Air Force in terms of cost-effectiveness. We are ready to actively discuss with our Indian partners in issues related to the supply of the aviation system. [MiG-35] Aviation systems allows to use the whole range of existing and future Russian and foreign weapons, including those intended for heavy fighters[Su-27 family] “- said Ilya Tarasenko, General Director of JSC” RAC “MiG” on 14th February 2017.

In 2011, RAC MiG built two new MiG-35 prototypes, a single seater MiG-35S with 741 BLUE bort number and a twin seater MiG-35D with 747 BLUE bort number which flew for first time on 3rd February 2012 and 24th December 2011 respectively. Unlike previous prototypes, these two new prototypes had mission system and equipment similar to MiG-29SMT beside some of the systems of MiG-29K/KUB. For example instead of the more advanced and more capable Zhuk-AE radar, they had Zhuk-ME radar of MiG-29SMT. They were later redesignated as MiG-29M and MiG-29M2.

Few years after the rejection of Zhuk-ME equipped MiG-29M/M2 prototypes (741 and 747 BLUE) by Indian and Russian Air Forces, two new prototypes with spacious nose section for Zhuk-AE radar were manufactured which are 702 and 712 BLUE. They are currently and temporarily equipped with Zhuk-ME radars but according to RAC MiG, they will be equipped with first pre-production Phazatron-NIIR Zhuk-AE radars by end of 2017. But there is still No guarantee that Phazatron-NIIR finishes work on a final version of Zhuk-AE AESA radar for MiG-35 in announced time.

It was expected that Russian Ministry of Defense sign a contract with RAC MiG for procurement of 30 MiG-35s during MAKS-2017 air show in Zhukovsky, but according to Russian Minister of Defense, Yuri Borisov, the contract for 24 MiG-35s including six for SWITS aerobatic demonstration team will be signed in 2018 in case of completion of the Zhuk-AE final version with increased detection range of 280km instead of current 160km. Russian Air Force has No intention to buy MiG-35s temporarily equipped with Zhuk-ME radars and then upgrade them in 2020, which is not cost-effective.

Also, Ilya Tarasenko, General Director of the RAC MiG told European Defense Review that the serial production of MiG-35 will start within two years [in 2019]. Previously in June, deputy director of RAC MiG, Viktor Chernov had said that the state tests of the MiG-35 will be completed at the end of 2017, and the serial production will start in 2018 with first deliveries to Russian Air Force in 2019.

Since March 2017, the state tests of 702 and 712 BLUE have started in Zhukovsky after the end of the initial flight tests in Lukhovitsy. In Zhukovsky, their armament and weapon systems will be tested while they are equipped with Zhuk-ME radar which has maximum aerial and ground detection range of 120km. This radar is now installed on MiG-29SMTs of RuAF and also MiG-29KR/KUBRs of Russian Navy.

Similar to previous prototypes, the 702 and 712 BLUE are both equipped with new RD-33MK engines nicknamed as Sea Wasp, which is the latest model of RD-33 engine developed by St. Petersburg JSC “Klimov” in 2001. This engine has not only increased thrust rather has increased service life and MTBO (mean time between overhaul). It has FADEC and smokeless combustion chamber and tens of them are currently being used by Russian Navy MiG-29KR/KUBRs after its mass production was started in 2006.