The Tazarv, with a maximum 645km/h speed, 11,580km service ceiling, composite fuselage and aluminium alloy structure, was showcased during the first International Iran Kish Airshow between 30th October and 3rd November 2002. Under control of two of best test pilots of the Owj Complex aerodynamic capabilities of the aeroplane was demonstrated to the public via tense manoeuvres. In September 2003, the Tazarv-1 was demonstrated in public again during Holly Defense week exhibition in Mehrabad Airport, Tehran. 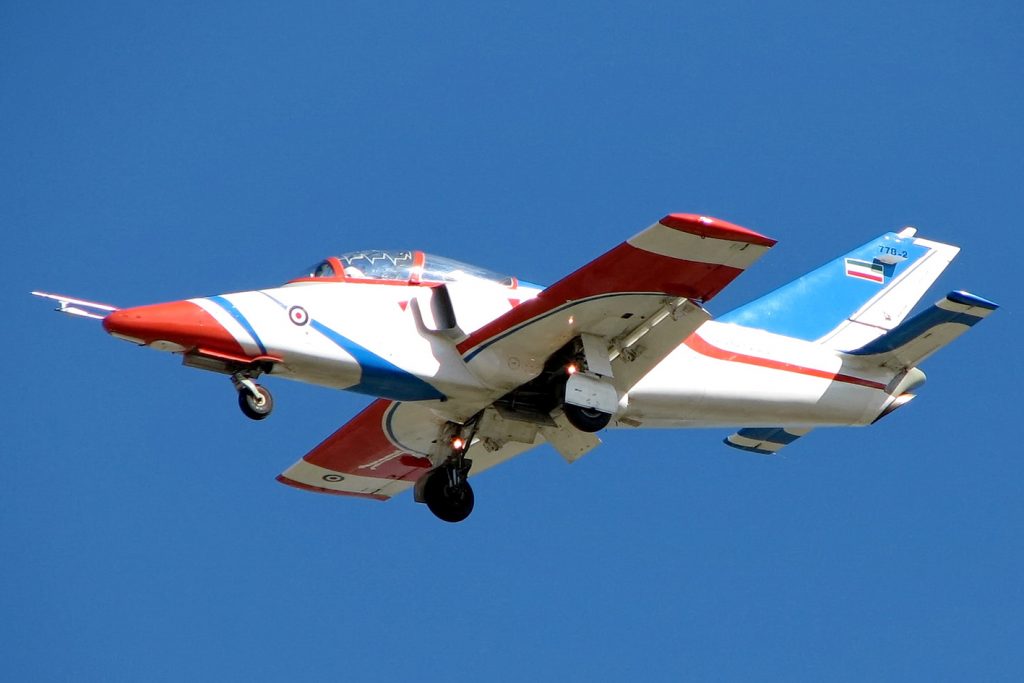 This is 778-2, one of the Tazarv advanced jet trainers designed and manufactured by Iranian Air Force’s Owj complex
in the 1990’s, seen during a test flight on 24th August 2006.

In Spring 2007, IRIAF HQ ordered Owj Complex to quickly prepare three airplanes of each so-called indigenous products, the Saeghe (Modified Azarkhsh F-5E with twin vertical stabilizers), Azarakhsh (rebuilt battle damaged F-5Es and upgraded through project SR.II), and Tazarv advanced jet trainers, in-order to be flown in Iran’s Holly Defense Week parade on 22nd September 2007. Because of unavailability of a third Tazarv, the Owj’s engineers were ordered to make the Tondar or 778-1 flyable again.

Because of the aerodynamic flaws of the Tondar, a series of modifications were applied to its control surfaces to immediately make it flyable again within few months. The Tondar, which was under conversion to Tazarv-3 was demonstrated to Brig. Gen. Salehi, commander of Iranian Army during his official visit from Owj’s installations in Mehrabad International airport in May 2007. Before participation in the parade, the Tazarv test pilots of Owj were flying with 778-2 three to four hours on average per month to stay current in 2006 and 2007.

Finally, the Tondar 778-1 was prepared for the test flight but this time under name of Tazarv-3 with 778-4 serial number only a few days before the parade. Two of the experienced test pilots and flight instructors were called from Isfahan to travel Tehran and carry-out test flight of the aeroplane. In-order to reduce the vibration to make the Tazarv-3 flyable temporarily in the parade’s day, the technicians attached lead plates to the wings and riveted the wing to the fuselage with weak aluminium rivets a week before the parade.

Only two days before the parade, the 778-4 was prepared for test flight while experienced Col. Mojtaba Mir-Asgari, who had 2,500 flying hours on PC-7C and FT-7N types as a flight instructor, was the front seat pilot, and a more experienced test pilot who is not known was sitting in aft-seat. The Functional Check Flight (FCF) was carried out over Parand, Karaj and during one of the normal banks, the aeroplane wings were separated. The aft-seat pilot ejected safely, while Mojtaba Mir-Asgari lost his life in the front seat.

Two days later, when the parade was held, only 778-2 and 778-3 flew in the flypast, and the news agencies were told by the IRIAF to not publish their pictures on their websites because of the absence of a third Tazarv in the formation. Furthermore, the Tazarvs, Saeghes and Azarakhsh, three S.68s (domestically manufactured PC-7Cs) were flown in three-ship formations during the parade to be showcased as indigenous achievements of Islamic regime for propaganda purposes.

After his death, the Col. Mir-Asgari body was delivered his family with several weeks delay to cover-up exact reason of his death. He was buried in his hometown, Takestan, Qazvin in secret. It was later claimed that he died because of his decision to stay in the cabin and land the wingless aeroplane! But in-fact he hadn’t enough time to eject when his aeroplane was in the upright position. He ejected toward the ground in low altitude which killed him instantly. The exact reason of the accident was later found in June 2008, which was the use of weak and low-quality aluminium rivets for attaching the wing to the fuselage. Which led to fatigue and fracture of them under stress.

The death of Mojataba Mir-Asgari led to the end of the project Ya-Hossein. Two remaining Tazarvs with 778-1 and 778-2 serial numbers didn’t fly after 22nd September and were grounded in Karbar ramp of IRIAF’s 1st Independent Transport Base, where the Owj Complex was located in its southeast. They were stripped down of their engines and all other valuable parts. They were only demonstrated in public again during Holly Defense Week exhibition of 2015.