To cope with increasing risks and threats Safran Electronics & Defense has added a third family of gimballed electro-optical sensors to its Euroflir 220 and 350 series, the Euroflir 410 that was unveiled in Paris. The number indicates the diameter of the gimbal in millimetres, the new series being thus a 16-inch system. Fully ITAR-free, the design being French and all components being European, the new sensor is available in three different models “S” (Surveillance), “M” (Marking) and “D” (Designation), the gimbal being able to host up to ten sensors. A full HD daytime colour and a thermal medium wave IR sensors fitted with continuous zoom optics ensure situational awareness, recognition and first detection capabilities day and night. Two spotter sensors in the same wavelength bands, respectively 0.4-0.7 µm and 3-5 µm provide a 0.33° and a 1.2° fields of view. However to ensure positive identification in all situations the Euroflir 410 is also fitted with a near IR spotter, with a 0.39° FoV, and a short wave IR spotter, with a 0.55° FoV. 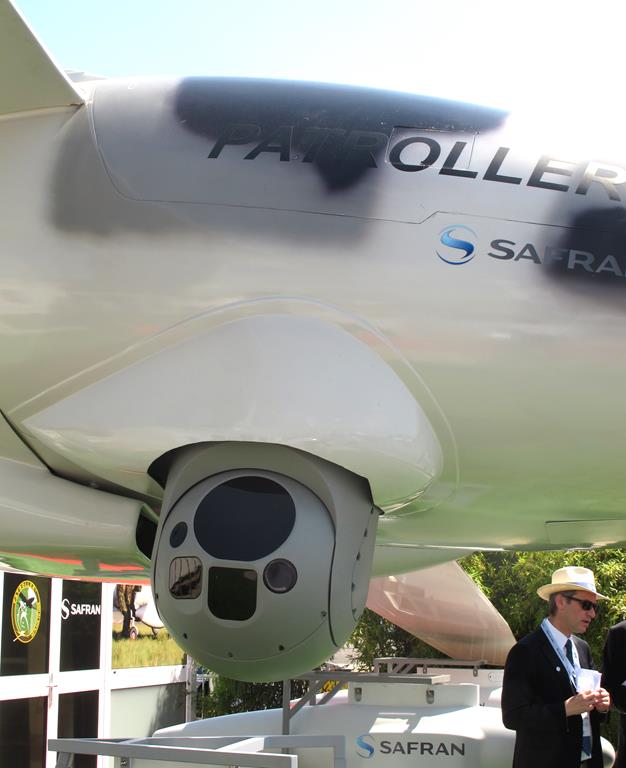 A mock-up of the EuroFLIR 410 installed under the Patroller; the UAV was also fitted with MBDA’s MMP missiles,
Leonardo’s PicoSAR radar and Engie’s COMINT suite. (photo P. Valpolini) 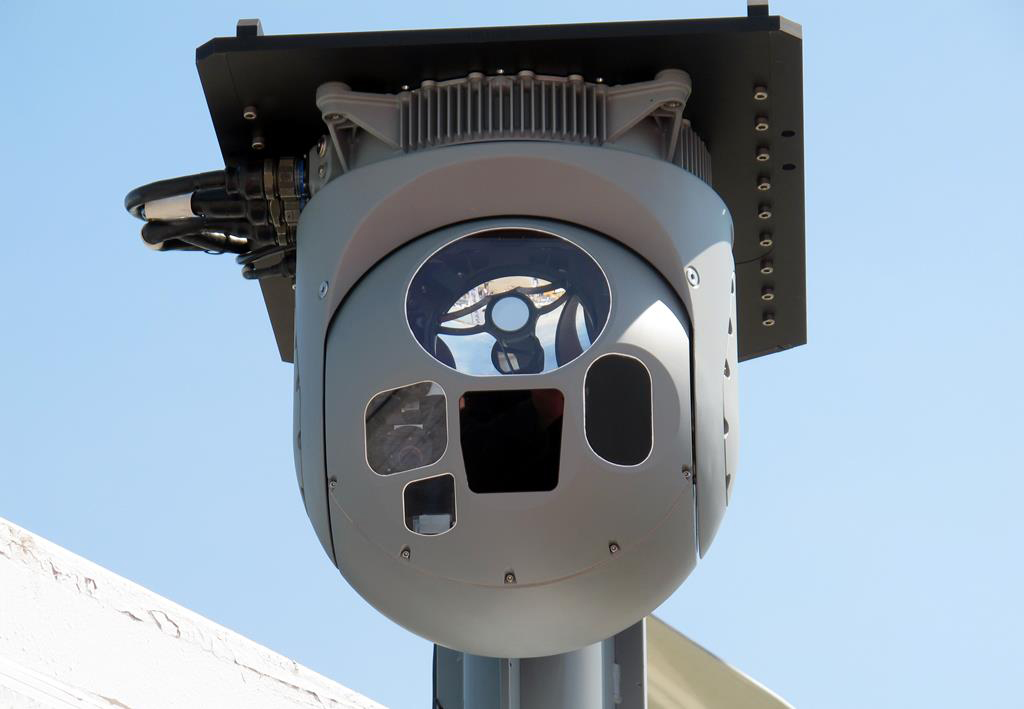 While the TV sensor provides optimal daylight capabilities, the NIR spotter ensures a very good resolution thanks to its 1920×1080 sensor, can be used in conjunction with lasers and has an extended sensibility in low light. As for the SWIR spotter this can also be used with lasers, its key advantages being however the use in very degraded conditions, such as in presence of sand and dust; moreover SWIR sensors are capable to see through glass, a useful capability in urban situations. Coming to lasers the 410 hosts can host a rangefinder with a 20 km range and a designator capable to guide missiles, both working in the 1.54 µm wavelength, as well as an pointer, which ray can be seen at night, and an illuminator, which spot can be seen when wearing NVGs. The system includes some advanced embedded functions such as moving map, augmented reality, moving target indication, hot spot detection, enhanced resolution, and blending, the latter allowing to exploit three images, day, thermal and SWIR, to provide the operator with the most useful image. Safran worked extensively on image processing, which allows the Euroflir 410 to increase standard range by 10-30%. The video is compressed on board for broadcasting, all metadata being recorder in order to rebuild all the info provided. The system weight is less than 53 kg, the Euroflir 410 being offered fr fixed and rotary wing platforms as well as for UAS, at the show a mock-up was visible under the company Patroller, as well as for aerostats.