The UK Defence and Security Organisation (DSO) within Department for International Trade (DIT), which provides the essential Government-to-Government dimension to company-led marketing campaigns in the export of Defence and Security equipment, was active at the Singapore Airshow. DSO regional director for the Americas and Asia Pacific, Alexis Hammer told EDR that the DSO’s main focus in the Asia Pacific region is to promote British industries defence products and capabilities. 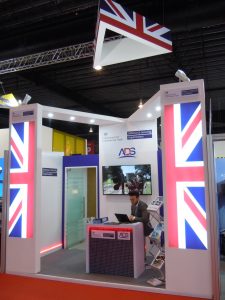 The UK has a strong relationship with Thailand especially in the naval sector, and it is negotiating to establish an regional MRO in the country while Royal Thai Air Force specialists are receiving electronic warfare training in the UK with Cohort MASS.

In March a UK trade mission is visiting Indonesia with 25 defence and security companies which will be followed by another trade mission to Australia, Japan and South Korea. This will include a visit by the Royal Navy’s upgraded Type 23 frigate HMS Sutherland prior to Australia selecting a winner of its Sea 5000 Future Frigate Program for which BAE Systems is a contender with a design based on the Type 26.

At a meeting in December 2017, the UK and Japanese foreign and defence ministers reaffirmed that their countries are each other’s closest security partners in Europe and Asia respectively. They agreed that bilateral ground and maritime exercises would take place and the development of a Joint New Air-to-Air Missile (JNAAM) would continue.

Alexis Hammer said that the UK is also developing closer relationships with the Philippines and Vietnam. He added that all the countries in the region are looking for more than just the purchase of a platform, they are looking for a package of through life support that includes training and MRO, and the provisions of upgraded sub systems as well as the all important items of technology transfer and finance. If there is 30 percent of more of UK content in any acquisition, a financial package can be negotiated.

In a very competitive market sector, Alexis Hammer is confident that the UK has much to offer the region.