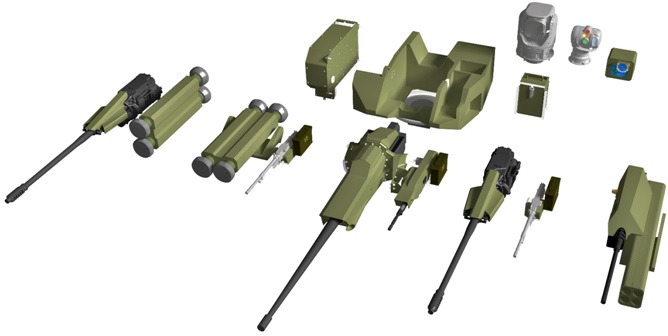 If Eurosatory 2020 would have taken place visitors would have found two novelties at the John Cockerill Defence stand, the first being the name, as it would have been the company première with its new branding as at the 2018 edition of the Villepinte event it was still CMI Defence. The second would have probably been the main focus of the stand, which is the new CLWS (Cockerill Light Weapon Station), a new product conceived and designed for Light Armoured Vehicles (LAVs) in the 8-10 tonnes combat weight class, aimed at reconnaissance and combat missions, although it can obviously be installed on heavier platforms.

John Cockerill Defence gave a hint of its new product at a conference last January, and is now ready to share more information, albeit some of the remain still company-classified. The CLWS can be fitted with the M242 Bushmaster chain-gun firing the 25×139 mm round or equivalent weapons from other manufacturers, which gives a LAV a firepower usually available only to much heavier vehicles, allowing them to make a quantum jump from a self defence effector, typically a 12.7 mm machine gun, to a combat weapon. The fully stabilised turret can also host cannon firing “short” 30×113 rounds such as the Northrop Grumman M230LF or equivalent of other manufacturers. The CLSW can be fitted with a secondary weapon, typically a 7.62 mm machine gun, installed on the left of the main gun, as well as with antitank guided rockets, such as Thales induction ones, or antitank missiles, also on the same side of the turret. These can also be adopted as main weapon, in a missile version of the CLWS, coupled to a self-defence automatic weapon. On the left we also find the panoramic sight, systems from different companies are proposed, the height with that sight being about 950 mm from the slip ring; adopting a coaxial sight, that would take the place of the secondary weapon, the height can be reduced to 600 mm, allowing the transport of light 4×4 vehicles inside the C-130 Hercules without any modification, however an option for a collapsible commanders sight is also available. The turret is about 1,2 m wide and three metre long including the gun (in the 25 mm version), and its combat weight with an M242 and a 7.62 mm MG is 600 kg. The M242 is typically a dual-feed cannon, therefore the turret has two different ammunition magazines, one being made of a rack with 30 rounds plus a 20 rounds belt, the other with 70 rounds and a 20 rounds belt, the latter allowing reloading from inside the vehicle; the MG ammunition has a 200 rounds combat load.

Stabilised on two axis, with an accuracy of less than 0.5 mrad on each axis, the gun elevation arc is -10°/+50°, azimuth and elevation speed ranging from less than 0.5 mrad/s for precision aiming up to 1 rad/s. The company declares a Wide Field of View detection range of 5 km, which increases to 8 km in the Narrow Field of View (NFoV) mode, recognition and identification ranges in NFoV mode being respectively 5 km and 2.5 km, these being reference data based on the most common panoramic sights available.

The CLWS is fully modular, both mechanically and electronically, thus John Cockerill is capable to easily adapt it to customer’s needs, its electronic architecture being based on the NVGA (NATO Generic Vehicle Architecture) standard. This allows an easy integration of systems such as laser warning receivers and gunshot detectors, as well as that of different types of communications suites or other sensors, antennas being located on the left. According to the company the missiles guidance system will remain separated from the cannon aiming sight.

The CLWS is easily installable on any platform, as it can be fitted in place of a standard hatch, the penetration inside the vehicle being minimal; as for the Human-Machine Interface, this is very similar to that of light RCWS consisting of a screen with integrated computer and a joy-stick. The option for reloading the main gun from inside allows the crew to operate for longer times without exposing itself to the enemy fire.

John Cockerill Defence is clearly positioning itself in view of the incoming French Army VBAE (Véhicule Blindé d’Aide à l’Engagement) that will become part of the Scorpion programme and aims at replacing the ageing Panhard VBL within armoured formation, where the light 4×4 represented the forward “eyes” of tank units. That said, thanks to its compactness and reduced weight, the CLWS proposed by the Belgian company s clearly something that raised the interest of numerous potential customers, JC Defence looking also at the interesting market represented by APCs upgrade like the M113, to which the CLWS might provide a considerable punch at a very low weight cost. John Cockerill Defence is working with major partners in the development of its new product and is closely looking at potential new European programmes in the field of light armoured vehicles.

10/06/2020 Paolo Valpolini Comments Off on Safran: towards an armed Patroller 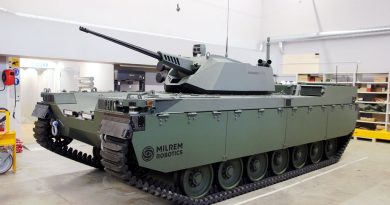