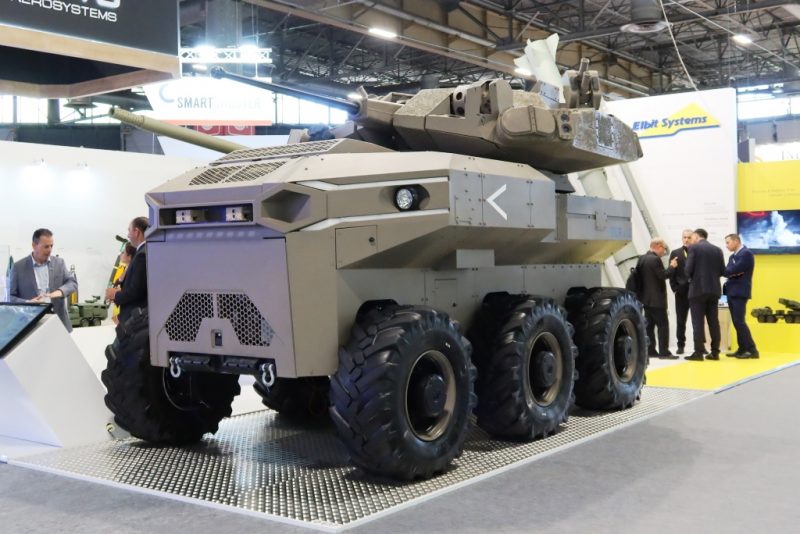 It is called ROBUST, the acronym for ROBotic aUtonomous Sense and strike, and it has been developed by the Israeli Ministry’s Directorate of Defense Research and Development (DDR&D), the Tank and APC Directorate, and Israeli defence industries, among which BL Advanced Ground Support Systems Ltd. and Elbit Systems, in which stand the new medium unmanned ground vehicle technological demonstrator was visible at Eurosatory.

The Medium Robotic Combat Vehicle (M-RCV) is a 6×6 wheeled vehicle of considerable dimensions, as its rear ramp might well allow infantrymen to enter the vehicle, but it is meant to remain a fully unmanned system. The chassis was developed by BL and is named BLR-2; the vehicle has no steering axles, steering being obtained by the differential speed on the various wheels. This steering system allows pivot turning, reducing to nil the turning radius, a considerable advantage especially when operating in reduced spaces such as woods or dense urban areas.

No details were provided on the propulsion and suspension system, however if the BLR-2 is an evolution of the previous BLR, the latter was powered by a 288 hp diesel engine and was fitted with hydrostatic hub motors, individual hydro-pneumatic suspensions ensuring maximum mobility. The “virtual driver” features an edge autonomous driving mode, with visual and thermal sensing and obstacle detection. The driving mode, which surely exploits artificial intelligence algorithms, is capable of global autonomous path planning and real time path adjustment.

With the engine at the front and the hub motors controlled by a drive-by-wire system, a lot of room is available inside the vehicle, as in usual armoured personnel carriers. The ROBUST, in the configuration seen at Eurosatory, exploits this space to host a robotic arm that protrudes from the rear opening, its “hand” carrying a vertical take-off and landing mini-UAS that is released and flies around to provide maximum situational awareness. At landing the mini-UAS approaches the robotic arm, which “hand” captures it. Once back in the vehicle, the arm is capable to prepare it for the next flight, ensuring the replacement of the battery and if needed also that of the payload.

Coming to lethality, the ROBUST was fitted with the MATE 30 unmanned turret, armed with the Mk44 30 mm Northrop Grumman cannon and a 7.62 mm coaxial machine gun. Developed by the Tank and APC Directorate for the Eitan 8×8 infantry fighting vehicle, according to information the main armament maximum elevation is 70°, which fits well possible urban engagements. The “virtual gunner” is fitted with autonomous target recognition, auto-tracking for multiple targets, smart fire plan and context-based target prioritisation. Commander and gunner have independent sights, which should allow hunter-killer missions, man-in-the-loop remaining mandatory for any lethal engagement operation. The MATE 30 can be fitted with an antitank guided missile launcher developed by IAI for Rafael’s Spike missile. On the four corners of the turret the antennas of the radar and sensors coupled to Elbit’s Iron Fist active protection system were visible, a trainable turret with two effectors each being fitted on top of the MATE 30, one per side.

The ROBUST might well operate alongside manned platforms in a land “loyal wingman” posture and, as  EDR On-Line understood, the combat version might be the first of a series of vehicles in different configurations. According to a press release issued during Eurosatory, field tests should be carried out in representative scenarios in 2023. 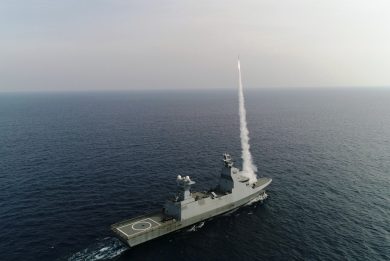 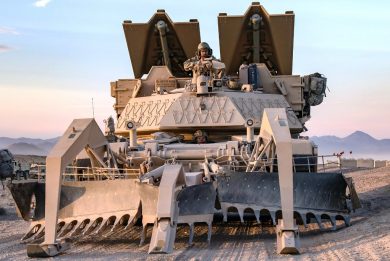