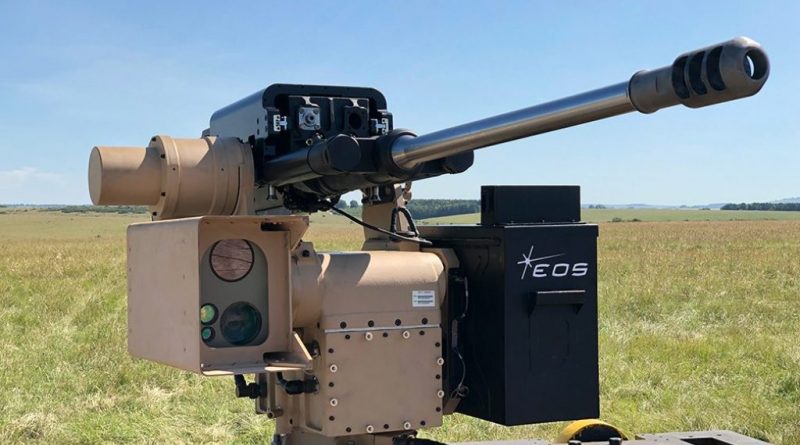 Get an RCWS, take off the 12.7 x99 mm machine gun and replace it with a 30×113 mm cannon: mission impossible? No Sir! AEI Systems, located in England at Ascot, Berkshire, is completing the firing trials of its Venom LR, the last two letters standing for Low Recoil, recoil forces having been reduced from around 22 kN of the standard Venom to a mean force of 7 kN (9 kN maximum), which allows integration in most RCWS that can fit a 12.7 mm machine gun. The two large buffers at the front of the weapon are key in reducing the recoil, the Venom LR maintaining the 1.40 meter long barrel of the Venom, its weight being marginally higher, 122 kg versus 110 kg. Firing trials were carried out on an instrumented flatbed as well as on the Midgard 300 made by Valhalla Turrets in Ljubljana, Slovenia, as well as on the R400S MK.2  Single RWS made y EOS of Australia. Trials were carried out at various distances, 500, 1,000, 1,500 and 2,000 meters, both in single shot and automatic mode, the rate of fire being 230 rpm. However the weapon can be brought back to the original rate of fire of 1,300 rpm, accuracy being of course partly lost in favour of the suppressive effect.

The Venom was born out of the original Aden revolver cannon developed by then Royal Small Arms Factory, however the new cannon is in fact a wholly new weapon most of its components being different as well as the working principle. The Venom in both versions features a mechanical and electrical cocking system the power supply being in 28 V DC, however according to AEI Systems the Venom LR is less power hungry than its competitor, which makes integration easier. The new cannon is proposed both for land and naval applications; currently a single weapon is proposed for both uses, however the company says that some minor differences might be needed for naval use.

Having the same barrel length both Venom cannons have the same V0, between 765 and 805 m/s, depending on ammunition, HEI, HEI-T, AP, AP-T and HEDP being available for operational use while TP and TP-T are available for training. Being entirely produced in the UK, the weapons are ITAR-free, the Venom LR being nearly ready for production while the full recoil version is already available and the company confirmed that it is close to have a launch customer.

Considering the number of light armoured vehicles in use by military and paramilitary forces in the Gulf region, the presence of AEI Systems does not come as a surprise.

The company has also just started developing a new project, that will bring to a cannon in 30×173 mm calibre, a possible timeframe for the prototype having not been announced.