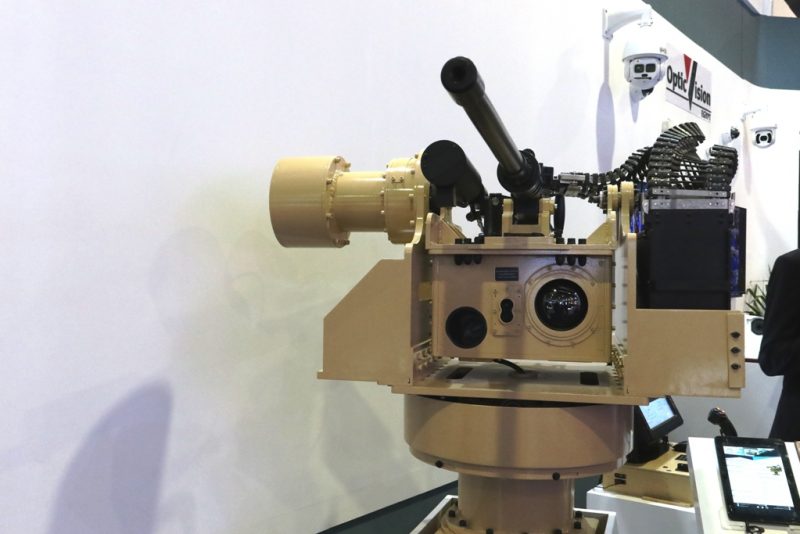 Arab International Optronics, AIO in short, unveiled at EDEX the first RCWS entirely designed and produced in-house, the X29. The company is a joint venture between Thales (49%) and NASPO (National Service Products Organisation) formed in 1982.

This brand new product is designed for static use, such as base protection installed on towers, and it is therefore not stabilised. The ammunition box is located on the left, with the machine gun in the centre, the optronic package being underneath the weapon, both moving together in elevation which is between -20° and +50°. The X29 can be armed either with a 12.7×99 mm M2HB (mounted on the RCWS exhibited at EDEX) or with a Russian-made KPVT 14.5×114 mm one.

AIO being first of all an optronic company, the sight package performances are stressed in their presentation. The thermal sight is based on a 640×480 Uncooled Focal Plane Array microbolometer operating in the 8-12 µm band fitted with an optic providing a 5.2° x 3.9° Field of View (FoV). In standard conditions it allows to detect a tank at 7.5 km and a human being at 3.5 km, identification ranges being respectively 1.3 km and 450 meters. The daylight sensor is based on a 1945×1225 pixels CMOS detector with a 6-210 mm zoom lens, field of view varying from 61° to 2°. This allows detecting a tank at 20 km at narrow FoV and 1.2 km in wide FoV, identification ranges being respectively 4 km and 200 meters. For a human target these data are 6 km and 250 meters for detection and 1 km and 40 meters for recognition. A single-pulse laser rangefinder with a 6 km range and an accuracy of ± 0.5 meters completes the optronic suite. The X29 is fitted with an automatic recording and video tracking system, the operator can select the number of rounds per burst, a bullet counter showing the number of remaining rounds. It can be interfaced with other sensors such as long-range cameras or radars. The overall weight of the X29 without weapon and ammunition is 160 kg, let’s not forget the considerable recoil energy of the KVPT, the system having already been fired in numerous tests. The Egyptian Ministry of Defence is obviously the first customers, AOI having just produced what is locally known as Zero Batch, which will lead to full production in the near future.

The X29 was far from being the only RCWS on the AOI booth. The Egyptian company started some time ago a fruitful cooperation with Escribano Mechanical and Engineering (EME) of Spain and is producing the Eagle 1, which is heavily based on EME’s Guardian. It can host the same types of weapons, the elevation range being -20°/+60°, and has a two-axis stabilisation system with an accuracy under mrad. While the ammo box remains on the left, the optronic suite is here on the right side of the mount. The uncooled thermal sensor is fitted with a two-position zoom lens providing FoVs of 9.0°x6.75° and 4°x3°. A vehicle can be detected at 6.9 km and identified at 3.2 km, while for a human target the respective data are 4 and 1.4 km. The day camera has a wider FoV, 12°x9°, narrow FoV remaining the same, vehicle detection and identification ranges being 7.5 and 2.8 km, while those for a human being are 6and 1.5 km. The laser rangefinder can measure distances up to 20 km.

An optional gun carriage adapter allows installing on the Eagle 1 also a 5.56 mm MG4, a 7.62 mm MG3 or an Mk19 40 mm automatic grenade launcher, smoke grenade launchers and ballistic protection, up to STANAG Level 2, being available as option.

The gunner station is fitted with a 12-inch LCD screen; the AIO RCWS can be interfaced with a battle management system and has an embedded simulator to ease training. Without weapons and ammunition, the Eagle 1 has a weight of 215 kg.

Currently AIO is producing around 30% of the value of the Eagle 1, including many mechanical components, but aims at increasing this share up to 70% by late 2022. According to information obtained at EDEX by EDR On-Line, the Egyptian MoD is ready to file a contract to AIO for the production of 400 Eagle 1 turrets; this will be split in two phases, each for 200 systems. One of the first uses should be on the new SENA 200 infantry fighting vehicle in the armoured personnel carrier configuration, also unveiled at EDEX

At the Cairo exhibition the Eagle 1, armed with a KVPT, was visible at the AIO stand mounted on an Egyptian-Sherpa. The naval version of the RCWS, named Eagle 2, was also visible on a mock-up boat, this being armed with a 12.7 mm MG.

According to EME, the cooperation with AIO might also be extended to the Aspis light RCWS, which was visible on a Temash 5 prototype. 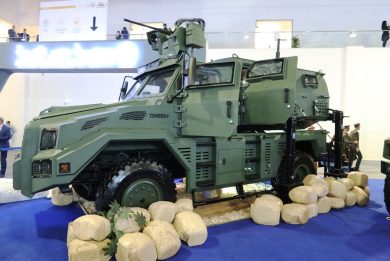 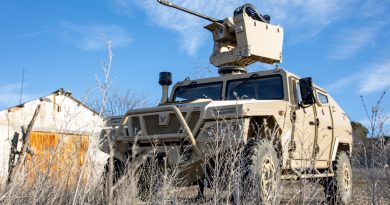 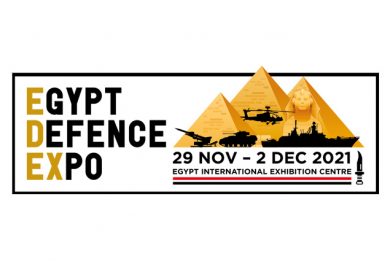