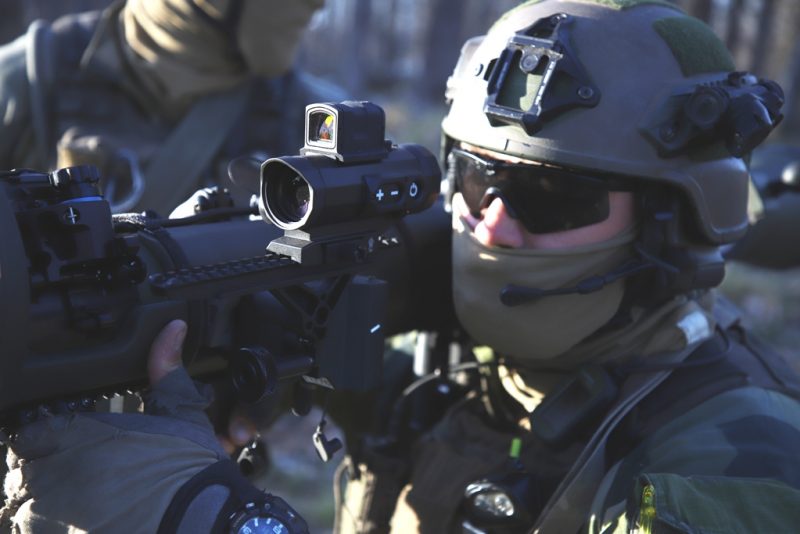 When the Carl-Gustaf M4 was introduced in 2014 it was clear that in perspective the advantages of the fourth generation weapon would be much more than weight reduction, the embedded wired communication allowing to adopt new types of sights and ammunition with the aim of improving accuracy and terminal effects.

The time has come, and at the Ground Combat Demonstration 2022 Saab presented different solution in terms of aiming devices, one from the company itself and two from partner companies.

Until now customers could opt for the weapon being fitted with iron sights or red dot sight, the aiming device that ensured longer range capabilities being the Saab 557B. This has a x3 magnification and a 12° Field of View, and is fitted to a V-slide assembly mounted on the front-left of the weapon. A range setting knob slides in and out to select the proper ammunition indicator ring for various rounds and rotates to adjust for range, the azimuth drum being used for azimuth adjustments during bore sighting, while the elevation drum is used for elevation adjustments during bore sighting and temperature adjustments, as well as during firing, maximum elevation range being 1,000 meters. The 557B is 250 mm long and weighs 0.9 kg. The range drum features four preset ammunition settings, while two luminous grooves form a V on the bottom left-hand side of the assembly to determine the weapon’s proper elevation when firing illumination rounds. The 557B cannot be fitted with night vision devices.

At the 2022 Kvarn/Karlskoga event Saab introduced the new Fire Control Device 558, FCD 558 in short, which considerably reduces the operator workload, the gunner having to deal with numerous variables that might be difficult to manage under the stress of a firefight. It features a better optic, a Hensoldt x3, but more important it has in its electronic memory all ballistic tables of existing Carl-Gustaf rounds. Distance is input by clicks, based on an estimate or an external laser rangefinder measurement, while air temperature and barometric pressure are kept into consideration when computing the ballistic equation. When the HE 448 round is used, thanks to the weapon communication system using the Firebolt protocol it is detected by the FCD 558 and also communicates the propellant temperature, a key element to improve accuracy. The FCD 558 moves the red dot according to the abovementioned corrections, the gunner having then only to put the dot on the target and squeeze the trigger. Thanks to the long Picatinny rail, it can be fitted with clip-on night vision devices, a solution seen at Kvarn being coupled to a Theon Thermís thermal sight. The FCD 558 weighs 1.2 kg with two AA batteries; it is ready for production and will be introduced as the standard sight in fall 2022. The system has already bagged a launch customer, the Swedish Army, which in December 2021 has ordered an undisclosed number of such sights in combination with HE 448 ammunition.

Two partner companies developed evolved sights that can be used by the Carl-Gustaf M4 to further improve its capabilities. Both feature a laser rangefinder and allow to evaluate the target angular velocity, in order to engage moving targets with a high probability of kill (Pk), and both can obviously exploit the M4 communication architecture that allows to link the three main elements, weapon, sight and ammunition, through the Firebolt protocol. Currently only one Carl-Gustaf round can communicate through the Firebolt, hence when using legacy rounds the soldier must insert manually, through the sight menu, the type of round that has been loaded in order to allow the system to choose the relevant ballistic table.

In alphabetic order, Aimpoint developed its FCS13RE fire control system for use on multiple weapon platforms, and worked closely with Saab for its adaptation to the Carl-Gustaf weapon system. It consists of a x1 magnification, parallax free optical channel direct view optic with unlimited eye relief, allowing to aim with both eyes open and facilitating transition between different targets, of a ballistic computer with the capability to store more than 50 different ballistic tables, and of an eye safe 1,550 nm Laser Range Finder (LRF) with a ranging distance of 20 to 4,000 meters, which the company underlines being able also ranging against snow that has only a 2-3% reflection and is therefore a difficult surface to cope with. The LRF provides the distance to target, which is fed into the computer, and with standard Carl-Gustaf 84 mm rounds the latter also takes in count air temperature and pressure data provided by external sensors, which must be imported manually. When firing on static targets the system automatically compensates for the ballistic drop, the operator needing only to put the red dot on the target and squeeze the trigger. However built-in inclinometers and gyroscope allow firing on moving targets with utmost accuracy, the FCS13RE having shown a 90% hit probability at 500 meters range on targets moving at 30 km/h. Here the operator aims at the target, follows it while activating the LRF releasing the rangefinder pushbutton when an icon shows the target has been acquired; he then puts the red dot on the target, the FCS compensating for both the ballistic drop and the lead angle. A x3 add-on viewer can be fitted to the FCS13RE to improve sighting at great distance. The Aimpoint sight is compatible with all types of helmet-mounted night vision goggles, 16 different light intensity levels being available, seven of which NVG-compatible, Aimpoint also providing a clip-on thermal imager known as TH-60 based on an uncooled sensor providing detection, recognition and identification ranges against a vehicle target of respectively 4,000, 1,000 and 600 meters.

The FCS13RE is fully available, it weighs 1.82 kg with AA batteries, and fitted with the Carl-Gustaf bracket. It can be used on all generations of Carl-Gustaf although it is fully exploited with the M4 version, especially when using the HE 488 round that automatically provides the propellant temperature.

The US Army is definitely one of the main users of the FCS13, and Aimpoint understood the service being willing to get a new generation sight that might further reduce workload and engagement time. It therefore launched a programme for the successor of the FCS13RE, the FCS14 being currently in an advanced stage of development. The new sight is able to automatically import all data as it has embedded sensors for temperature and pressure. Its weight with the DSA thermal/day add-on will be around the same of the FCS13RE without night attachment, the direct view sight only weighing around 1.5 kg. The FCS14 maintains the direct view optic, which is typical of Aimpoint, and is fitted with a high definition display while the legacy sight had a red-dot matrix. For the time being the display is used to move the red dot according to the ballistic equation results, however Aimpoint added it in view of future options to be added in a more networked environment, The same applies to the increased connectivity, the FCS14 being able to receive as well as to send target data to other units through soldiers’ network, such as the ATAK app or other systems. The DSA clip-on includes a thermal and a day digital channel, and is designed for one-hand operations. As said initially, Aimpoint considers the direct view optic the better solution, as the human eye is definitely superior to any other type of sensor, especially at day. At night, soldiers can look either through their helmet-mounted NVGs, as the US Army does with success with the FCS13, or use the DSA, both channels featuring an electronic zoom with x4 and x8 magnification, the system allowing to show the image on a remote screen. The FCS14 is fitted with a digital compass and a GNSS receiver (not M code), which together with the LRF allow it to pick-up the grids of a target to be distributed on the network to other effectors, WiFi and Bluetooth links being offered as option. Should the sight receive target grids from an external source, the target will appear as a dot while a diamond will show up on the display, and to get the sight on target the operator must bring the dot inside the diamond, this procedure having already been demonstrated. The company kept the human machine interface as similar as possible to that of the former sight in order to reduce re-training time, the menu tree being therefore very similar. The item seen at Kvarn was not indicative, as it was one of the very first prototypes, still with an aluminium case while the final version has a polymer case, lighter and tougher. The latest versions have already being provided to selected potential customers to get early feedback before freezing the configuration.

Senop of Finland, part of the Patria group, developed in close cooperation with Saab Dynamics the Advanced Fire Control Device Thermal Imaging (AFCD TI) that is specifically designed to be used with the Carl-Gustaf M4. A lightweight system, around 1.5 kg with batteries, the AFCD TI development started in 2019 and the system is now in the last development stage, pre-production items having already been provided to some NATO nations. The Senop sight includes both a night channel, based on an uncooled 640×480 thermal sensor with electronic zoom, and a day channel, with an over 1 MP resolution and also electronic zoom, the standard view having for both channels a x3 magnification with a 12.5° x 9.4° field of view. The image is provided to the shooter on an 800×600 colour display, on which the operator can selected either day or night view, or a fused imaged from both channels. An LRF with an over 3 km range is also fitted (2 km on NATO target) that provides range measurement with a ± 1 m accuracy, detection, recognition and identification ranges against man-size and vehicle targets being respectively 2,000, 800 and 500 meters and 5, 1.8 and 1.2 km. The AFCD IT suite also includes sensors providing terrain angle and cant angle, ambient temperature and barometric pressure, as well as a gyroscope that gives the angular rate. The system computer contains all current rounds ballistic tables, and can be easily updated with those of new rounds that will be developed. The AFCD IT was designed to be part of the Carl-Gustaf M4 system, therefore it can interface with the weapon communication system allowing two-way data exchange between it and the ammunition. The human machine interface includes the power switch, the joystick, and a separate push-button for the laser rangefinder. The operator sees in the screen the type of ammunition loaded, the battery charge status, the target distance, while the joystick allows to select the view type, the brightness, etc. Pressing the LRF button starts the targeting process, the operator following the moving target for around 2 seconds and when the icon stops flickering he releases the pushbutton and the red dot is moved to the correct position considering both lead angle and the ballistic drop. The AFCD TI is powered by AA batteries, an external power supply being also considered.

Carl-Gustaf M4 users, which number has already attained the 15 mark, will soon be able to choose among three different options, with different costs and performances, depending on their requirements. It is however clear that as the number of ammunition types capable to communicate via the Firebolt protocol will increase in the coming years, the adoption of smart sights for the nephew of the recoilless gun developed over three-quarter of a century ago will become more and more appealing. And more sights might also appear. 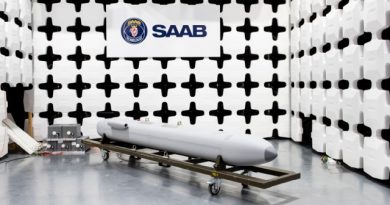 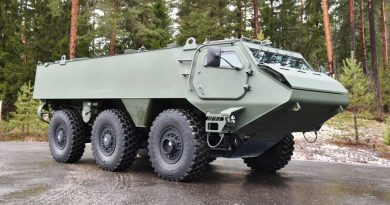