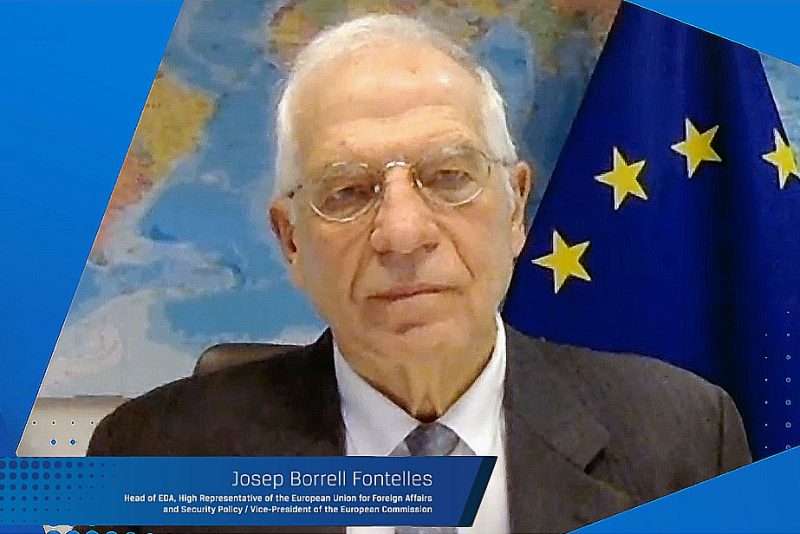 On Day 2 of the EDA Annual Conference it was the turn of Josep Borrell Fontelles to give the opening speech. Mr. Borrell, in his role of High Representative for Foreign Affairs and Security Policy, and Vice-President of the European Commission, is also the Head of the European Defence Agency.

After underlining the increasingly volatile security environment that lies close to the EU borders, such as the developments in the Eastern Mediterranean and the conflict in Nagorno-Karabakh, and the overall security scenario which is threatened by increasing nationalism, growing rivalries between global powers, climate change and risks associated with the use of disruptive technologies, cyber-attacks and terrorism, Mr. Borrell mentioned one of the EU key documents for the Union security and defence policy, the Strategic Compass, that will be adopted in 2022. “Just two weeks ago, Ministers of Defence discussed the first ever threat analysis done at EU level, on the basis of the contributions of 27 Member States’ civilian and military intelligence services. This analysis confirms that we are facing right now – but we will continue to be facing in the future – the most challenging combination of risks and threats since the end of the Cold War,” Mr. Borrell stated, underlining that the message that comes from that analysis is loud and clear: “Strengthening the European Union’s security and defence policy is not some luxury that the EU has, that you can live without it. No, it is a necessity. The challenges we face can only be addressed by providing a collective European answer.”

And this led him to express the need to be able to act autonomously when necessary, something that recently spread some controversy not only among Europeans but also with EU allies on the other side of the Atlantic. “Yes, let me repeat it: Strategic Autonomy. We have to discuss about what it does mean, and how to do it, but we cannot renounce to use these terms.”

Which leads to the fact that EU must increase its operational effectiveness, its civilian and military capabilities, but it does not mean it intends to be independent or to isolate itself from the world, on the opposite its will further strengthen its relations with partners, according to the EU High Commissioner.

“The Strategic Compass should be considered a key deliverable of my mandate,” Mr. Borrell stated, adding that it is not ‘yet another paper’, it is a specific paper directed to the broad situation of security and the challenges and aims to create a common understanding of the threats that Europeans are facing.

The EU adopted a Global Strategy from 2016, as well as a number of sectorial strategies, i.e. in the cyber, hybrid or maritime security areas. The Union also launched a number of new defence initiatives, such as the Permanent Structured Cooperation (PESCO), the European Defence Agency (EDA), and finally the European Defence Fund (EDF), the Strategic Compass objective being to give a clear direction to enhance coherence between all these initiatives and strategies, taking into account the rapid evolution of the security environment in the last years.

“More importantly, I think that the time has come for Europeans to converge more broadly on the definition of what kind of security actor and security provider we want to be, and which are the sources of insecurity. When you say ‘defence’, immediately it comes to mind ‘defence from which threats?’ and when you say ‘security’, ‘security about which dangers?’. Which are the counterparts of the words security and defence? What does it mean for Europe to be a geopolitical power?” are the questions the High Commissioner considers the EU has to provide a collective answer.

He also stressed the need for developing a common strategic culture on security and defence, which “Is not going to be easy, because Member States come from different historical and cultural trajectories with deep roots in the past, that have to be overcome in order to have a common understanding of the present and of the future.”

To improve its security and defence posture the EU revised in 2018 its Capability Development Priorities (CDP) while a number of other initiatives were taken, among which PESCO. “At present, 46 PESCO projects are ongoing, with 26 of them due to deliver concrete results by 2025 in areas such as military mobility, cyber defence, maritime surveillance or medical,” he said. As for the EDF, “€ 7 billion will be invested over the next 7 years – less than expected, I agree – but I think that it will be enough to start investing to support the competitiveness and excellence of our industry. The European Defence Fund is related to industrial defence capabilities development. You cannot expect to be autonomous on anything if you do not have an industrial basis and in defence more than in any other field.”

To improve EU defence capabilities the EDA has a key role, as it should promote and facilitate greater convergence among Member States in defence investment, planning and cooperation. “You are the big driver of this cooperation efforts in a field in which there are strong national identities and interests,” Mr. Borrell said to the Agency representatives during that Annual Conference.

Improved cooperation is also the main message that came out of the first-ever comprehensive defence review conducted at EU level, the Coordinated Annual Review on Defence (CARD). “This CARD report shows us not only what we are lacking in terms of capabilities, but also how fragmented our efforts currently are,” the High Commissioner stated adding that “In Europe, we currently operate 1,700 fighter aircraft of 16 different types. We also have 16 different types of main battleships: 130 corvettes, frigates and destroyers of more than 30 different types,” while the United States only has four different types. “It is not about going towards a one-size-fits-all [approach] – let us be clear, I am not saying that we must have just one type,” he clarifies, however Europe cannot afford anymore the current level of duplication and uncoordinated efforts, economies of scale potentially allowing to save tens of billions of euros. “We have to spend more, maybe, but for sure we have to spend better, and the best way to spend better is to spend together.”

The CARD showed that fragmentation is not only an equipment problem. “Member States’ commitment to the CSDP in real terms of personnel and expenditure barely represents 7% of their total operational commitments in all frameworks,” Mr. Borrell said, before stating what should be the end-state, a more coherent and integrated European defence landscape. “We need more capable, deployable, interoperable and sustainable military capabilities and forces. We need a drastic change of mind-set from those making the key defence decisions in Member States,” as in the end defence remains a competence of Member States. But the fact that now the EU has a Defence Policy, that documents like CARD and the Strategic Compass are being published, all this might lead to that desired change in the mind-set. “Cooperation is not always the easiest way, but it is the best that we have, and in the end it is the only way to achieve results . . . and the CARD identifies more than 100 opportunities for Member States to cooperate.”

All this applies not only to equipment issues, “We have to push for joint planning, development and procurement, and the Pooling and Sharing of capabilities to improve the output of military spending, saving money and increasing interoperability and operational effectiveness,” Mr. Borrell stated underlining that this “will also promote a stronger, more competitive and more innovative European defence industry. As an example of cooperation the High Commissioner mentioned a programme which was born at EDA, the Multinational Multirole Tanker Transport Unit, based in Eindhoven, the Netherlands, which operates the first three transport and air refuelling aircraft of the six planned. “This programme stands as a good example of how European countries can cooperate, pooling and sharing resources, to address long-standing European shortfalls, in this case strategic transport and air-to-air refuelling [capacity].” Not only the MMTT avoids fragmentation of efforts at EU level, “It is also a prime example of European defence cooperation in close coordination with NATO.”