On 10 October, DCNS signed a contract with the Ministry of Defence of the Arab Republic of Egypt for the supply of two MISTRAL-class projection and command ships (BPCs). After the delivery of a FREMM frigate and the construction of four GOWIND® 2500 corvettes, currently on-going, this agreement strengthens the strategic relations with the Egyptian Navy, initiated by the Group in 2014. By 2020, the Egyptian Navy will deploy a fleet of at least seven combat ships designed and built by DCNS. 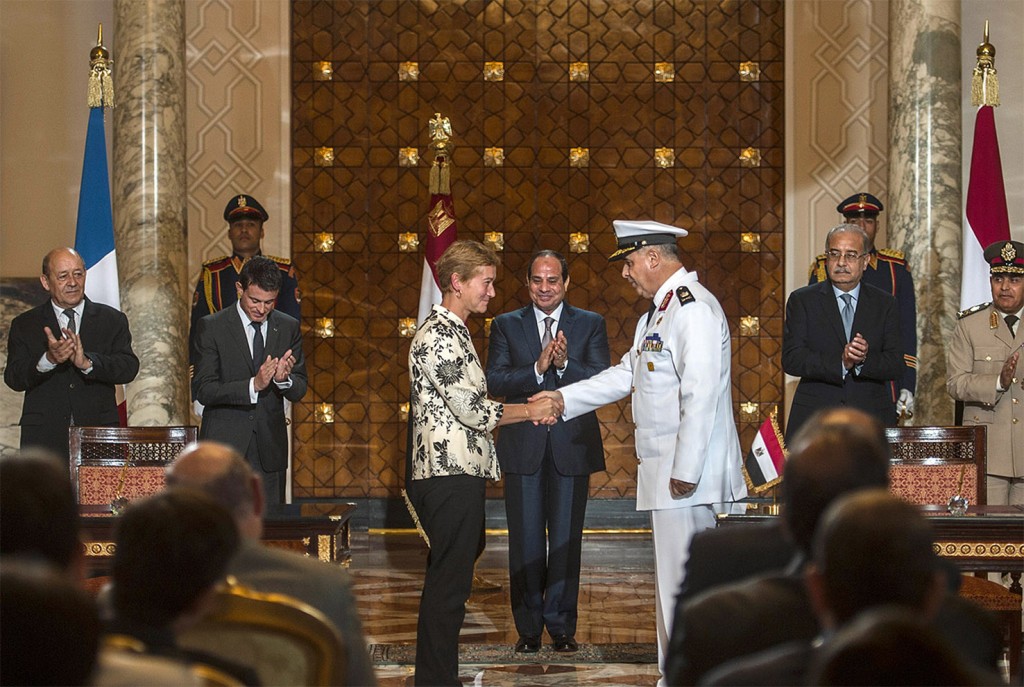 Hervé Guillou, Chairman and CEO of DCNS announced that: “After the contracts for the supply of four GOWIND® corvettes and a FREMM frigate, we are proud that the Egyptian Navy continues to place its trust in us today by signing a contract for the delivery of two MISTRAL-class BPCs. With 7 combat ships already ordered to date and a latest-generation frigate already in operation in the Egyptian Navy, DCNS is thus participating in the modernization of the defence infrastructure of this strategic French ally.”

The two projection and command ships (BPCs) ordered by the Egyptian Navy from DCNS will join their home port in the summer of 2016, after the training of the future crews. This training will be given mainly over the 1st half of 2016 in Saint-Nazaire.

With regard to associated BPC support ships, DCNS will supply in particular four new-generation landing crafts (CTM NG), designed by the Group as an integrated system to an amphibious force organized around MISTRAL ships, and two fast landing crafts (EDAR), designed and built by CNIM.

A long-term partnership with the Egyptian Navy

Considering that the first of the four future GOWIND® corvettes for the Egyptian Navy is already being built, that the other three will be assembled in Egypt in Alexandria and that the FREMM Tahya Misr frigate was already delivered to the Egyptian Navy on 23 June 2015, the signature of this new contract further strengthens the strategic partnership developed between DCNS and the Egyptian Navy.

By 2020, the Group will have supplied at least seven ships to Egypt contributing to the modernization of its defence mechanisms.

This strong partnership between the Arab Republic of Egypt and the French Republic is reinforced by DCNS’ commitment to accompany the Egyptian Navy in the long term, especially with the unfailing support of dedicated service teams for the maintenance of main warships. The Group also states its presence in a wider project of industrial cooperation with the Egyptian party in the field of construction and maintenance of major program units.

Once again, due to this historical agreement, DCNS expects to build a partnership with the Egyptian Navy but also with Egyptian shipyards with which the Group intends to build a long-term cooperation. That is how DCNS has decided to invest in the Egyptian Industry to mutually develop the essential knowledge and means to support a leading Navy.

Technical characteristics of the MISTRAL-class projection and command ships (BPCs)

With a length of 199 meters, a displacement of 23,000 tonnes and a speed in excess of 18 knots, the MISTRAL-class BPC is defined by its large carrying capacity.

The MISTRAL-class BPC is designed for force-projection, peacekeeping and humanitarian-support operations, and is equipped with a particularly modular command and control centre, featuring efficient communication systems that can be adapted to all shipboard headquarter configurations.

It also has an onboard hospital, and can carry out large-scale humanitarian missions. Its highly capable communication system makes it the ideal command ship within a naval force.