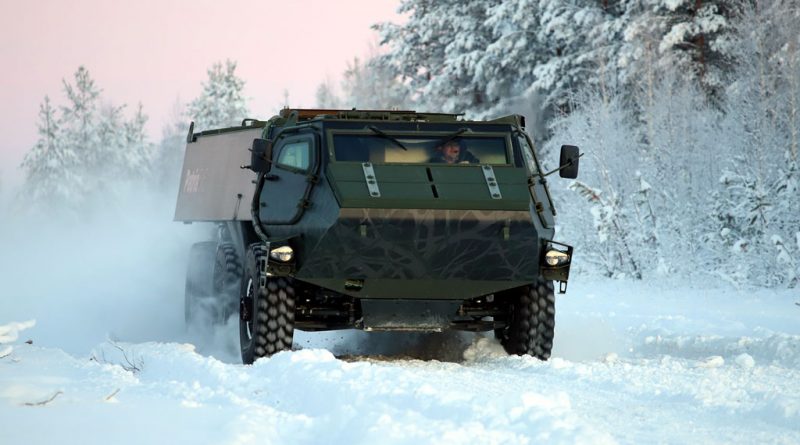 With the left hand we pull the red knob of the parking brake while keeping our left foot on the pedal brake; the red sign of the parking brake on the lower part of the display disappears, confirming it has been released. One last look at the image provided by the rear camera to check our 6 o’clock, and we set the automatic transmission on “D”; we release the pneumatically controlled brake and our right foot start pushing on the accelerator pedal, the 5 cylinders in-line Scania engine revving up, its 294 kW accelerating the 22.5 tons of the Patria 6×6 prototype in the deep snow. We are in the municipality of Sodankylä, 67° 25’ North, which is some 100 km north of the Polar Arctic Circle, in the military area that hosts the Jaeger Brigade of the Finnish Defence Forces, a unit that fields mostly light high mobility vehicles and is responsible for safeguarding the north-eastern border of Finland.

The vehicle is the same unveiled in Paris at the Eurosatory 2018 exhibition, however its look has changed. At the front and on the top steel plates have been fixed to bring the weight 1.5 tons short of the 24 tons maximum gross vehicle weight, while a bundle of electric cables on the right side shows well that the prototype has been fully instrumented to gather all the data needed by Patria R&D engineers during the development phase. The vehicle has travelled north from Hämeenlinna, where the Patria facility is located, together with a test vehicle version of the AMV featuring an older generation hull and the new Patria AMV XP driveline, for a session of tire tests further north of Sodankylä, the mission being also beneficial for adding kilometres to the 6×6 vehicle as it is still undergoing endurance testing. 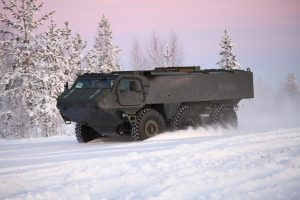 Back in the crew cabin, the full width windscreen ensures maximum visibility, and the glass cockpit provides all information at a glance. It is however the ease of the driving that is surprising, especially when you are not used to operate a 20+ tons vehicle. The hydraulically assisted steering, the first and second axles being mechanically linked, allows to easily driving with one single hand with great precision. The terrain is relatively flat, the 1,870 Nm torque allowing to easily cope with the few small ramps, however the snow conditions vary, from deep fresh snow to a more compact surface where vehicles have passed more often, some segments featuring ruts with iced snow. On the entire test track the 6×6 shows maximum directional stability, and although we definitely do not push it to the limits we feel safe even when performing a 270° turn in the deep snow to invert our movement on the test track.

The coil springs suspensions with hydropneumatic shock absorbers provide a surprisingly smooth travel; this can be felt in the cabin, but we appreciated it even more when travelling in the back, the rear compartment being fitted with eight energy absorbing seats, the right part of the prototype being in fact now occupied by the testing equipment. As option Patria provides hydropneumatic fully independent suspensions, which should further improve comfort and stability. The automatic transmission provides a smooth transition from one gear to the other, and often we do not even notice it. The prototype is not fitted with the centralised tire inflation system, and it also does not feature the rear axle steering, both being however offered as option. As for power generation, the Patria 6×6 is fitted with a 150 A system available commercially off the shelf, however the company proposes as option a 350 A solution. 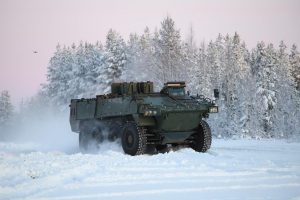 To compare two different vehicles, we then reach the driver’s seat of the AMV 8×8; as said, being an older hull, the cockpit is definitely different from that of the 6×6. The access is not easy, the driver being seated on the left of the 450 kW 6 cylinders in line engine; once installed in the seat, this is raised by electric actuators in order to allow us to properly see outside through the small windscreen. The parking brake is on the front-right, the transmission control being on the left, the opposite of what we had on the 6×6, however the procedure is similar and we are very soon on our way on the test track. Also loaded with extra-weight, the AMV runs today at 28 tons compared to the 32 tons maximum GVW, four tons short of the maximum GVW, the feeling is not much different, although the greater weight and the longer vehicle, 8.4 meters versus the 7.5 meters of the 6×6, make it clear that you are on a vehicle born for combat rather than for troop transport.

“Following the end of operations in Afghanistan, and considering the evolving geopolitical situation, in recent years, many armies put a greater priority on homeland defence,” Janne Räkköläinen, Vice-President Vehicles Systems Land at Patria tells us. “We then consider that there is a need for a reliable and affordable armoured personnel carrier, especially looking at the current APC fleets of many armies that are made of ageing and low capability vehicles.” An example is Finland itself, its Army having in service Patria XA-series vehicles most of them having entered service in the late 1980’s, early 1990’s. 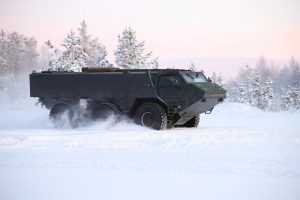 Hence the decision to produce a 6×6 with a 24 tons GVW, 8.5 tons of which represent the payload, keeping in mind since the very beginning the cost reduction issue; development work started in 2016, the vehicle having been unveiled two years later. “Our new 6×6 is designed for troop transport, which allowed our engineers to work on a dedicated target, all design decisions having been based on the expected use of the vehicle,” Räkköläinen explains. Beside smart design solutions, the vehicle adopts COTS subsystems, such as the aforementioned Scania engine, which is different from the one adopted on the AMV. Used in high numbers, and with a distributed service network, it provides a high reliability at an affordable cost. Many subsystems are however coming from the same suppliers of the AMV, this allowing scale reduction benefits.

When exhibited at Eurosatory the 6×6 prototype had already logged some kilometres. Since last June it has continued endurance tests in different conditions, hard soil, soft soil, slopes, forests, etc, something it is continuing to do now that the winter has brought the snow in Finland, although for this season snowfalls have been quite limited for the time being. 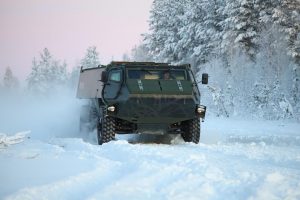 The first prototype demonstrated the validity of the design, base technologies used having proved reliable and provided good results. However some minor changes will appear on the two further prototypes, currently under construction at Hämeenlinna. The most visible one should be the increase of the front cabin volume, obtained moving forward the windscreen by a few centimetres. One of the two vehicles, which should be ready in Spring 2019, will be fitted with two rear propellers and will allow carrying out amphibious tests, while the rear steering axle will not be fitted, no more details being available as the final configuration has not yet been fully frozen. Here too Patria leverages the experience acquired in the past years, and is confident that the solutions adopted will prove effective and reliable, amphibious components having been thoroughly validated since the early XA-series of vehicles.

This allows maintaining cost efficiency, as there is no need to redesign every single solution; rear doors, giving access to the troop compartment, are close derivatives of those used on the AMV, as well as many other items. Being designed, as said, for troop transport, Patria put great emphasis on inside space, in order to carry up to 10 dismounts plus a crew of two, driver and commander in the front cabin, or 8-9 dismounts and a crew of three, driver, commander and gunner, all their equipment being hosted inside the protected hull, equipment being based on a 72-hours mission requirement. Talking protection, the 8.5 tons payload is that for Level 2 protection, this being reduced when Level 4 is adopted, add-on armour kits using part of the payload.

Besides continuing testing, the two new prototypes joining the current one in this activity, these will also be earmarked for customer demonstrations, Patria is already looking at variants, here also leveraging the experience of the AMV. A mortar solution based on the Patria NEMO 120 mm turret is planned since the very early days, the integration layout being already on some of the R&D division computer screens. Solutions already exist for other variants, such for example for an engineer vehicle, the crane, winch and dozer blade having been thoroughly tested and validated on the AMV, a command post and a reconnaissance variant being also considered, as well as an ambulance version, based on various existing base designs and lay-outs already in operational use in other Patria vehicles.

Another key issue in the design phase was to build a vehicle easy to produce, in order to make it possible to allow local production by the customer, a solution adopted used in many cases with the AMV, Patria having in fact outsourced mass production to the various facilities in Europe and South Africa.

“The vehicle attracted considerable interest at the Paris exhibition,” Janne Räkköläinen confirms, “and some of those talks have continued afterwards, some positive discussions being ongoing with potential customers.” Discussions are also ongoing in Finland as, soon or late, the Army will have to replace the wheeled APCs currently in service, many having seen service in operations under the UN flag. 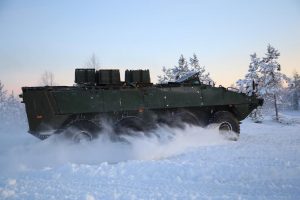 Looking at the future Patria, which is definitely one of the company’s most sensible to the mobility on soft terrain, this being in its DNA due to its geographical position, considers that further weight increases for its 6×6 and 8×8 vehicles might affect that capability, considered a key element being also part of the survivability concept. Its R&D division is thus constantly monitoring all technologies that might lead to curb weight reduction, in order to increase payload while maintaining the same GVW; these ranges from design, to materiel and protection solutions, discussions being always ongoing with suppliers on those topics.