The heads of Eurosam, Aselsan and Roketsan – respectively Michel Vigneras, Faik Eken and Selçuk Yaşar – have signed on the 14th of July in Ankara a Heads of Agreement (HoA) under the aegis of the Turkish Undersecretariat for Defence Industries (SSM) to launch in-depth co- operation in the field of air and missile defence.

The HoA sets the work sharing agreements for a definition study with the SSM on a long- range air and missile defence system to be launched in the coming months.

The future Turkish air and missile system will be based on the technologies and experience that Eurosam has built in ground and naval systems using the Aster missile over 25 years and EUR11 billion of collective investment. These systems have been delivered to the current home nations of France and Italy, many export nations, and are able to defeat the most challenging of air threats, whether air breathing or ballistic. The future programme will be managed in synergy with future evolutions of the Eurosam systems in France and Italy.

At the occasion of the HoA signature, Eurosam CEO Michel Vigneras said: “The Italian Army has deployed two Eurosam-built SAMP/T firing units since June 2016 as part of NATO’s contribution to the defence of Turkey and its people against potential missile threats from beyond NATO’s southeastern flank. Today’s agreement is a clear demonstration of the willingness and readiness of our 3 companies to build further on the strong defence co- operation commitments already in place and to work together as equal partners, towards a common goal and sharing full and entire responsibility vis-à-vis the Turkish authorities. I am confident that today, we have laid the foundation of a long term co-operation between Eurosam and the Turkish defence industry.” 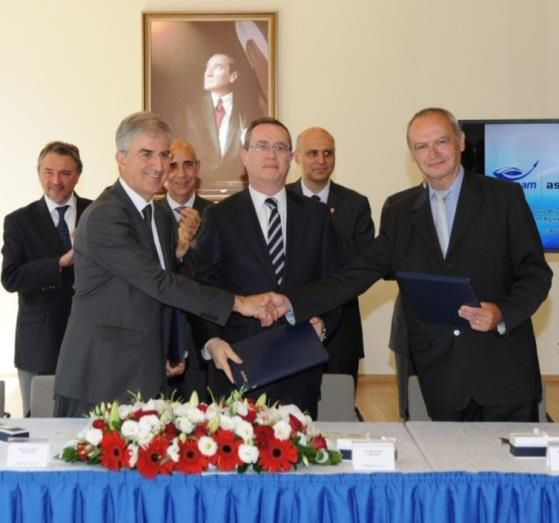 From left to right, Basat OZTURK, Deputy Undersecretary of Turkish Ministry of Defence; Selcuk YASAR , President and CEO of Roketsan; Luigi MATTIOLO, Italian ambassador to Turkey; Dr Faik EKEN, President and CEO of Aselsan; Mustapha SHAIKER, Deputy Undersecretary of SSM; Michel VIGNERAS, CEO of Eurosam congratulate after the signature of the Heads of Agreement for the definition phase of the long range air and missile defence system on July 14th in Ankara, in the presence of the French ambassador to Turkey, Charles FRIES (not in the picture).