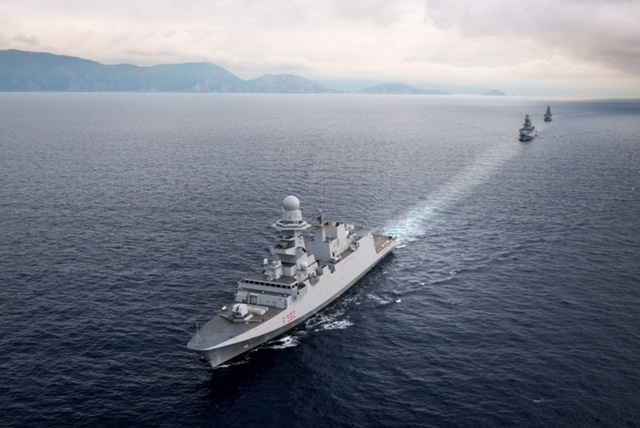 Rome/Trieste, October 09, 2018 – Leonardo and Fincantieri, as part of the collaborative relationship and the preferred partnership launched in October 2014, have established the guiding principles of an agreement in the field of naval ships to better seize the new challenges on international markets, in order to present joint solutions in an increasingly competitive and demanding sector. The enhancement of complimentary expertise – developed at national level in order to expand market presence abroad – will be undertaken through the revamp of Orizzonte Sistemi Navali (OSN), the Joint Venture held by Fincantieri and Leonardo with shares of 51% and 49%, respectively. Both parties intend to provide resources that will enable OSN to assume responsibility for the development of the Combat Systems and the definition of subsystem requirements and individual components’ architecture, including the Combat Management System (CMS). This agreement represents the basis for subsequent binding agreements, which the Parties will negotiate in compliance with applicable regulations, including those governing related parties’ transactions and antitrust matters.

The development of the “ship as a system” product is based on a long and successful history of collaboration on national and export programs that Fincantieri and Leonardo, respective world leaders in the construction of naval vessels and in the creation and integrated management of CMS, weapon systems, communications, radar sensors and electro-optics, have developed over the years.

Giuseppe Bono, Chief Executive Officer of Fincantieri, said: “We believe that an ever-closer collaboration between the two most important defence companies in Italy is crucial. The agreement signed today is a demonstration of our on-going commitment as we look to the future. As prime contractor for the entire naval system, Fincantieri will continue to act as the single customer interface, enhancing the product offering of the two groups and acting also as a driver of the development of technological excellence for small and medium-sized Italian companies in the sector.”

Alessandro Profumo, Leonardo’s Chief Executive Officer said: “With this agreement, Italy will present itself in an even more cohesive and effective way, in a highly challenging market, enhancing all the high-tech skills that the two companies have developed together. Revamping Orizzonte Sistemi Navali is the best way to encourage the development of the entire national supply chain which contributes to the creation of military ships. Through jointly offering products and services, we will increase the competitiveness of the Italian industry in the international market”.

The renewed agreement will enhance the existing collaboration model between Fincantieri and Leonardo that will allow to exercise their respective roles and responsibilities more effectively and to define a joint product strategy for the military naval sector.

Fincantieri and Leonardo will make the Joint Venture Orizzonte Sistemi Navali the design authority for Combat Systems, with all the necessary skills to fully carry out this role, improving its operational effectiveness. The Joint Venture will represent a vehicle to maximize Italian content and the consequent returns for the Nation’s industry and its supply chain.

Fincantieri will act as prime contractor, the single interface to customers and hold responsibility for the warship as a whole (Whole Warship Design Authority), therefore in charge, on behalf of OSN, of the architecture of the ship system concerning both the platform and the Combat System. Leonardo will be the preferred partner for the Combat Management System and the equipment and systems of the ship.

The strengthening of the partnership between Fincantieri and Leonardo will enhance the resources and excellences of the two companies to secure future commercial and industrial opportunities. The renewed collaboration will allow to present to both national and international markets innovative solutions thanks to a more competitive offer consisting in better products and services, thus engaging SMEs in a more structured way.

To this end, the two companies have agreed to set up permanent working groups in order to make the cooperation for the development of new products for naval units and the optimization of supply chains easier.