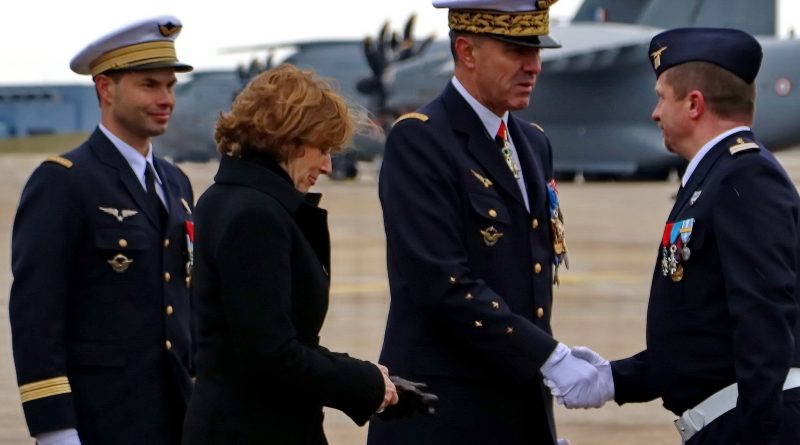 On 15th January 2018, during an official ceremony at BA123 Orleans, first C-130J-30 of French Air Force was officially entered in service of the Squadron 02/61 “Franche Comte”. The C-130J-30 in question with 61-PO tail code and 5836 construction number is the first out of total four Super Hercules transport airplanes ordered for French Air Force. 61-PO’s delivery is a beginning for use of Super Hercules in both French and German Air Forces as a complementary airplane for their fleet of Airbus A400Ms in mid-2020’s. Babak Taghvaee, journalist of EDR attended the handover ceremony in Orleans Air Base.

A400M Atlas, a great piece of art designed and manufactured by Airbus Military can’t fully meet the needs of French and German Air Forces in tactical airlift missions. With maximum transport capability of 37 tons, the A400M is classed as a heavy transport airplane which is not suitable for the type of missions in which French Special Operations Forces need to use Medium Transporters with tactical take-off and landing capability in unpaved and short runways. Therefore the Super Hercules is the solution to fill the gap of lack of medium transport airplanes in various NATO air forces such as the Royal Air Force which now operates a fleet of 13 Hercules C4s (C-130J-30s) and eight Hercules C5s (C-130Js) as a complementary fleet for its 22 Atlas C1s (A400Ms).

French Air Force has been operator of C-130H and C-130H-30 Hercules since December 1987. These airplanes have played key role in service of the air force and they have been used in tens of combat missions where they could meet the needs of French Special Forces, counter-terrorism units and paratroopers both in Sahel-Saharan region and Middle East. Not only in wartime rather in peacetime, the Hercules fleet has been used in various disaster relief missions as well as regular transport flights between French Air Force bases in France, Africa and Caribbean Sea. 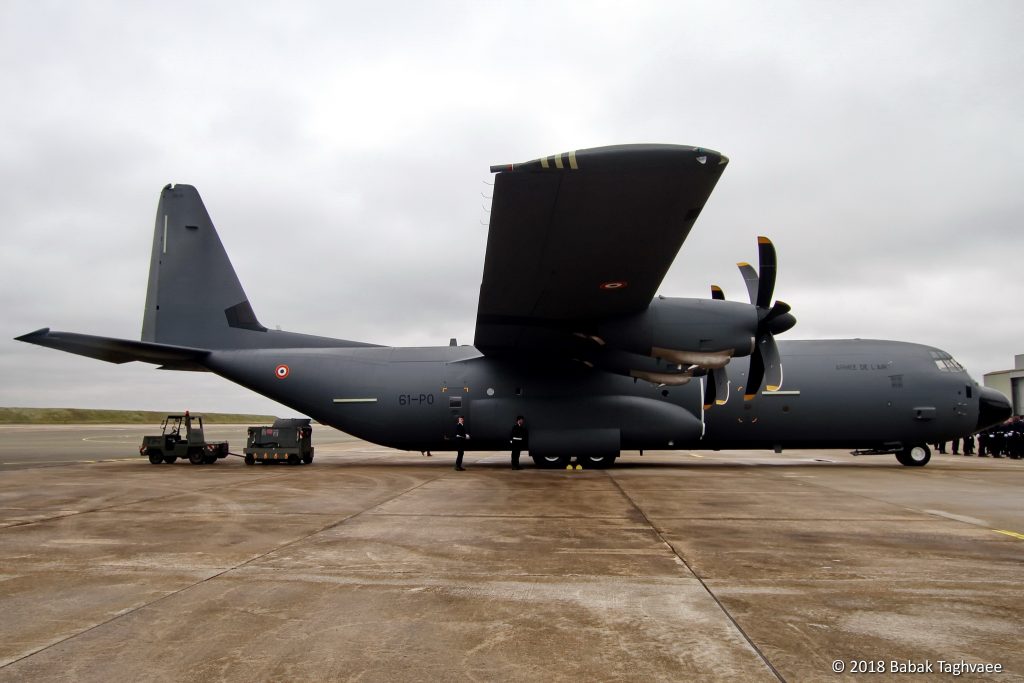 The first Super Hercules of French Air Force, a C-130J-30 with 5836 construction number which was officially handed over 02/61 Squadron on 15th January had been rolled-out of Lockheed Martin facility back on 21st October 2017

Total nine C-130H-30s and five C-130Hs were delivered French Air Force between 1987 and 1997. Few years after delivery of last C-130s, French Ministry of Defense showed interest in C-130J and also KC-130J Tanker airplanes in-order to be used for aerial refuelling support of its Eurocopter EC725R2 Caracals in Sahel-Saharan region in future. But it took several years until, finally two C-130J-30s and two KC-130Js were ordered for French Air Force. One of reasons behind delay for procurement of the KC-130J was development of aerial refuelling system for Airbus A400M Atlas which finally turned-out to be unsuitable for refuelling helicopters.

The first Super Hercules of French Air Force, a C-130J-30 with 5836 construction number which was officially handed over 02/61 Squadron on 15th January had been rolled-out of Lockheed Martin facility back on 21st October 2017. After completion of its test flights at Lockheed Martin factory in Marietta, Georgia, 5836 was later flown to France and arrived Orleans AB on 22nd December 2017. Second C-130J-30 of the air force will be delivered in 2018 while the KC-130Js will be delivered in 2018.

Air’s chief of staff Gen. André Lanata and French Minister of Defense, Ms. Florence Parly attended the official handover ceremony of 61-PO or 5836 while also high ranking military officials from various NATO Air Forces including commander of Luftwaffe, USAFE and also US Ambassador to France, Jamie McCourt were among the guests. Ms. Parly explained about future of transport airplanes fleet of French Air Force. According to Ms. Parly, French Ministry of Defense has still its plan on-going to form a fleet of Strategic airlifters by means of 50 Airbus A400Ms by mid-2020’s, from this 13 are already delivered and two more are expected to be delivered within next four months.

During her speech at the handover ceremony, Ms. Parly said: “The C-130H has served and still serves France. From Orleans to the Balkans, from the Gulf War to UN missions in Cambodia, from the Afghan mountains to the Sahel desert, the C-130H has allowed France to mobilize its forces, to deploy its troops wherever is needed quickly”, she also added “The [Newly delivered] C-130J will increase activity of our crews resulting enhance of their tactical skills, and improve of their training capabilities. This C-130J is breath of fresh air to relieve the pressure on [French Air Force] aging aircraft fleet until the Airbus A400Ms reaches its full strength”.

Now, the brand new C-130J-30 of 02/61 Squadron will be used for test purposes of French Air Force until next three months. After that it will be used for training of new groups of aircrews. Both of the new C-130J-30s of the air force will be equipped with self-defense systems such as RWR and Chaff/Flare dispensers to protect them against danger of Surface to Air missiles, MANPADS and also air to air missiles during their combat operations in 2020. 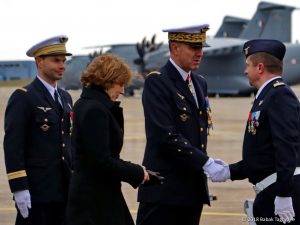