On day 2 of DIMDEX an MoU worth 89 million Euro was signed between the Qatar Emiri Air Force and the German company Reiner Stemme Utility Air-Systems (RS-UAS) for the production of an optionally piloted vehicle, known as Q01, which model could be seen from the arena where contracts were announced. The development of the Q01 is based on a German-Qatari partnership and started from a white sheet in Spring 2014, the design being based on international requirements, which asked for a MALE platform that could be flown both manned and unmanned, with a one-tonne payload. The piloted option was intended to allow the unrestricted use of the system in civil airspace, while the unmanned option allows to put at risk only the hardware when operating in dangerous areas, or when carrying out long repetitive missions in airspace where the flight of a UAS is admitted. 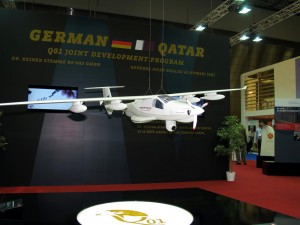 With a 20 metres wingspan, a 10.7 metres length, an empty weight of only 1,553 kg thanks to the carbon composite airframe, and a maximum take-off weight of 2,750 kg, the Q01 can host up to three people. As manned missions are foreseen at relatively low altitudes, 10-15.000 ft, the aircraft is not pressurised, its maximum operating altitude being 30,000 ft when flown in the unmanned mode. Powered by a Technify/Continental 6-cylinder, 3 litres turbocharged IC 310 hp engine which can use both JET A1 or Diesel fuel, it has a three blade constant speed propeller with a 2.10 metres diameter and can reach a cruise speed of 190 knots, manned autonomy being 3,000 Nautical Miles or 24 hours, while unmanned the Q01 can fly up to 1350 NM or 12 hours (3000 NM in 24 hours for ferry flight). The fuselage can host up to 600 kg of payload, two 256 kg inner wing fuel tanks are available while two inner pylons allowing to install external fuel tanks for extended range missions. These can also host sensors, the same for the two external pylons, an electro-optical payload being located under the pilot’s cabin, a radar being installed at the rear of the fuselage. During DIMDEX an MoU was signed between the Qatar Armed Forces and Thales which will lead to a 15 million Euro contract for the acquisition of Searchmaster radars to be installed on the Q01. RS-UAS proposes under the right wing the MACS (Modular Aerial Camera Systems) developed by the DLR (Deutsche Zentrum für Luft- und Raumfahrt, German Aerospace Center). The aircraft power plant provides 18 kW electric power supply for payloads, further 4.4 kW being available for aircraft systems. The Q01 prototype made its maiden piloted flight in November 2015, the first unmanned flight being expected for late 2016-early 2017. To this end, the Berlin-based company teamed with an undisclosed partner, to aircraft and payload by line-of-sight or satcom data link. The prototype is currently involved in the full EASA certification test programme.