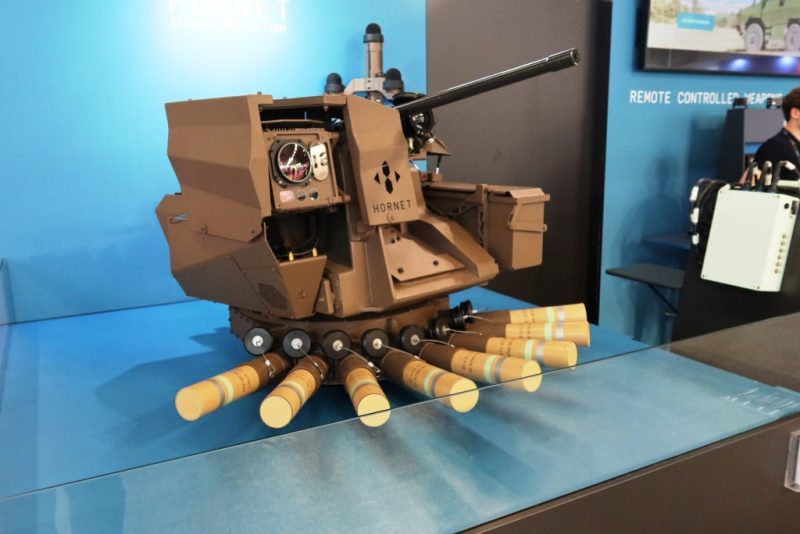 Launched at IDEX 2021 as a separate brand from that of its mother company, Arquus, at Eurosatory 2022 Hornet shows its products in a separate booth, although its presence is much wider as 9 of its remotely controlled weapon stations (RCWS) will be present on 6 different stands.

Among them we find three novelties, all derived from the Hornet RCWS, for different applications.

After years of asymmetric confrontations, the war in Ukraine has put forward once again the need for a strong antitank defence, and Hornet is proposing its solution.

Adding an antitank missile to an RCWS is not easy task and to this end Hornet and MBDA are cooperating on the development of a new configuration of the Hornet turret. Following the announcement of the new name of the MMP and the future MHT missiles, both now part of the Akeron family, respectively medium range (MP) and long range (LP), the turret has become the Hornet Akeron. One of the options of the Hornet RCWS is the add-on of a smoke grenade launcher that can rotate independently from the turret; this of course adds weight, that of 8 Galix 13 80 mm multi-spectral combat smoke grenades being 36 kg without counting the launchers and the rotating platform with its electric motor. To avoid adding too much weight, the antitank version will therefore not be equipped with the smoke grenade launcher system. The Akeron MP round has a weight of 15 kg with its launch tube, and has already been mechanically integrated into the Hornet. The standard optronic package that equips the Hornet covers well the acquisition and aiming needs, detection, recognition and identification ranges at day being respectively of over 9.8, 5.6 and 3.4 km, while at night these are of over 6.5, 2.8 and 1.6 km. Inside the vehicle integration has voluntarily be kept at a reduced level, in the sense that the Akeron MP human-machine interface (HMI) does not exploit the same display used for aiming the machine gun or grenade launcher. The drawback is that it uses some room inside the vehicle, however the advantage is that it allows a much easier upgrade of existing RCWS. According to the company the Hornet is in an advanced stage of development. At Eurosatory 2022 it is installed over the Scarabee 4×4, the hybrid reconnaissance vehicle developed by Arquus in the last few years which is proposed on the market since early 2021. According to Hornet a solution with two Akeron MP missiles is already being studied, the company highlighting however that the evolved warhead of the Akeron MP ensures high kill probability even with a single hit.

Among the three new solutions proposed by Hornet, the most advanced, which is already available to customers, is the Hornet Stealth Protection, which exploits the aforementioned independent smoke grenade system. The concept of that version was unveiled at DSEI and is based on the Hornet as a dual effector, lethal with the installed weapon and non-lethal with the Galix smoke grenades, and a sensor capable to detect small, medium or large calibre shots. Those subsystems are linked through the Arquus BattleNet electronic architecture that provides the vehicle commander with a clear view of the engagement and the type of threat in near-real time. An automatic reaction can be pre-set: usually in case of small arms fire the automatic weapon would be oriented towards the threat while the Galix would cover the remaining sectors, while should the threat come from a medium or big calibre system, in that case it would be the Galix system that would orient itself towards the fire source generating a smoke screen with a first salvo of four grenades, reiterating the operation with a second salvo after a certain time in order to guarantee maximum coverage. In perspective Hornet looks at developments from its partners, Lacroix currently working on a computer that would get relative wind data from a meteorological station, the vehicle odometer providing the vehicle speed, algorithms ensuring the best moment and angle to which grenades have to be launched to provide the best possible screening. The BattleNet being based on an open architecture, it allows an easy insertion of further elements, such as i.e. a Laser Warning Receiver that would pick up the laser beam used by a beam-riding antitank missile, allowing generating a smoke screen that would disrupt the guidance. Beside range considerations, the soft-kill choice is also due to the fact that grenade launchers can be brought to bear much more rapidly, as the angular speed of the Galix crown is much higher than the 90°/s of the RCWS.

Last but not least comes the third variant, which for the time being is at concept stage. Known as Hornet Air Guardian, it is a solution that will allow equipping light armoured vehicles with an effective counter-UAS capability while maintaining a self-defence capability provided by the RCWS weapon. The system is being presented in mock-up form as it is still in development. In the Air Guardian the crown that usually allows to independently aiming Galix launchers hosts the radar and the radiofrequency-based system. Those cover an angle of 90°, hence the surveillance is carried out in the direction from where the main threat can come, a non permanent surveillance carried out sector by sector rotating the sensors being also an option. Should more than one vehicle in a convoy be equipped with such a system and with an appropriate C2 system it would also be possible to ensure collaborative surveillance. No information on the radar provider could be obtained, due to an agreement with that company, while the RF system is provided by Cerbair of France, which purposely developed a solution for the Hornet Air Guardian. As for the effector, this is the Heckler & Koch GMG 40 mm automatic grenade launcher, fitted with the programming system in order to employ Rheinmetall 40 mm x 53 Airburst Munition ABM), which allow to generate a wall of fragments in front of the incoming drone. These rounds maintain of course their lethal capability also against other types of targets, ensuring therefore the self-defence mission. The data needed for programming the ABM grenades, which is the time when the grenade must detonate, is calculated by the on-board computer thanks to the data provided by the radar in terms of distance and ballistic tracking. The Hornet Air Guardian will be an evolution of the current turret, as it will need architectural adaptation. 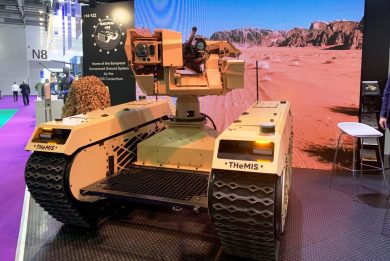 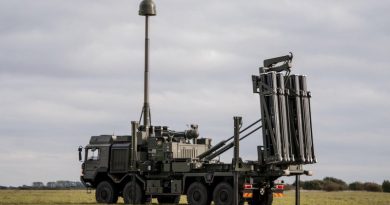