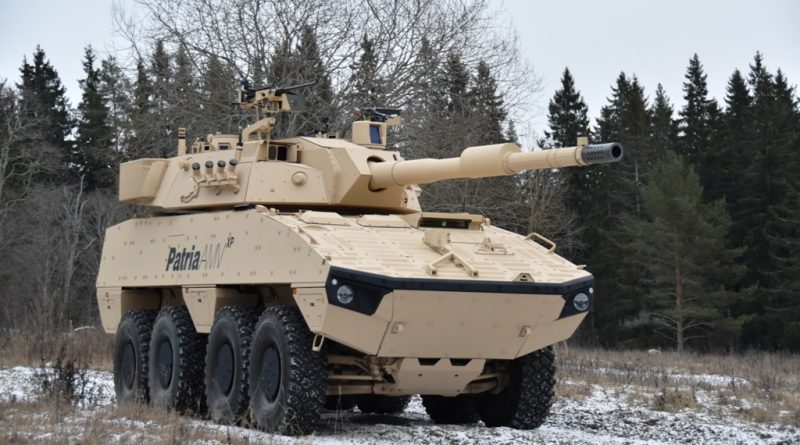 On show at Patria’s booth at IDEX was the latest configuration developed for the company AMVXP 8×8 vehicle, the vehicle being fitted with Leonardo’s HITFACT 1 Second generation turret, armed with a 120 mm smoothbore gun. According to the Finnish company a solution with such a gun has raised increasing interest in many areas, the Middle East being definitely one of those, hence the cooperation with Italy’s Leonardo that provided the turret installed onto the Omani Centauros. The integration was relatively simple, it took 4-5 days, the AMV (M” standing for modular) being inherently designed to be able to accommodate various types of turrets and payloads. The solution proposed is definitely a tank killer, however compared to tracked solutions it has a much higher tactical and strategic mobility. At 32 tonnes, the vehicle is 8.4 meters long and less than 3 meters wide; the turret is armed with a 120/45 mm smoothbore gun, a coaxial 7.62 mm machine gun and a pintle mounted machine gun, either 12.7 or 7.62 mm. 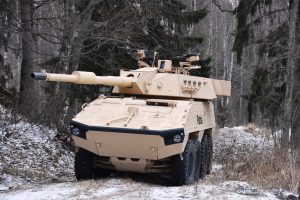 The vehicle has a crew of four, the driver in the hull and the remaining three, commander, gunner and provider, in the turret. Twelve 120 mm rounds are available in the turret, 20 more being available in the vehicle hull, which retains the ability to carry two more soldiers on seats at the rear, while a stretcher can be loaded on the floor should the need arise, the rear ramp being retained as it is considered an optimal solution for loading ammunition, the turret crew finding it much easier to enter the vehicle from the rear rather than from upper hatches.

To improve mobility the vehicle was fitted with 16R20 tires, which were introduced with the AMVXP. The new configuration was finalised in December 2018, first drive tests being carried out before Christmas holidays. No firing tests have yet been done, however Patria is planning them in the near future. Leonardo has developed the successor of the HITFACT seen on the AMVXP, which is being provided to the Italian Army as part of the Centauro II mobile gun system; lighter, with a new gun, it has a number of improvements, the breech being modified to accept a programming  module to fire all the latest type of ammunition, allowing it to use the optimal round according to the target. An automatic loading system should also be developed.