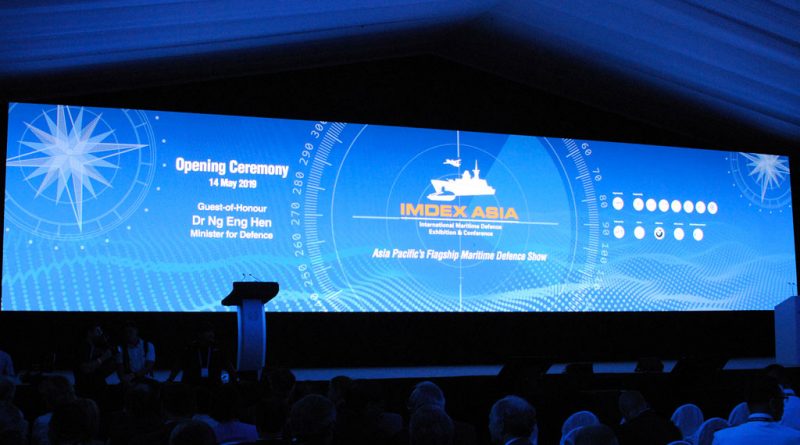 Opening  the 12th International Maritime Defence Exhibition and Conference (IMDEX) Asia and welcoming the participating 23 defence and navy chiefs and companies representatives, the Republic of Singapore Minister for Defence, Dr Ng Eng Hen, has underlined the importance of the event, as the latter ‘has gone beyond exhibitions to serve an important focal point for defence and military leaders to exchange views, and arrive at a consensus on common security challenges in this region and ways to tackle them through collaboration and co-operation’, he said. Singapore sits at the confluence of the two key arterial networks formed by the Strait of Malacca and the South China Sea. ‘As a result, 25% of all the traded goods in the world on more than 1,000 ships pass through the Singapore Strait each day. From there, ships go to over 600 ports in more than 120 countries – nine of the ten busiest ports in the world are in this region, including Singapore, the second after Shanghai’. Despite global uncertainties, ‘experts estimate that global container throughput is projected to grow by four percent each year, exceeding 800 million TEUs, and generating earnings of over USD 25 billion for container ports around the world’. Looking to the maritime security challenges for the region, the Republic of Singapore Minister for Defence highlighted the fact that traditional maritime threats persist, such as transnational maritime terrorism, piracy, armed robbery and the trafficking of drugs, weapons and humans. 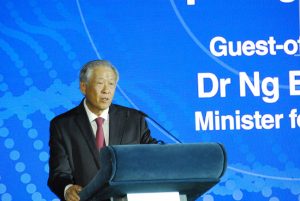 ‘Over the years, we have cooperated and better organized ourselves to deal with these threats, as we did through the Malacca Straits Patrol, the Trilateral Cooperative Agreement in the Sulu Seas, and the Regional Cooperation Agreement on Combating Piracy and Armed Robbery Against Ships in Asia, or RECAAP’. The results ‘speak for themselves’, with the number of incidents of piracy and armed robbery along the Straits of Malacca has continued to fall, it was 20 in 2007 and it was 8 this year.  ‘But for other recently evolved security challenges, more work needs to be done. Collectively’, Dr Ng Eng Hen has evidenced, ‘we need to step up our intelligence efforts as the centre of gravity of global terrorism shifts away from the Middle East and moves to other regions of the world, including this region, which have been susceptible to radical ideologies’. The suicide attacks in Surabaya last May, and the June 2016 Puchong nightclub attacks in Malaysia, ‘are grave warnings that terrorism can become endemic in this region, unless we come together to deal with this threat decisively’.

Another area of concern in the maritime region, the Republic of Singapore Defence Minister highlighted, ‘are the different rules adopted by various countries that govern the use of the global maritime commons, not least the rules that relate to freedom of navigation but also extending to maritime territorial claims on fisheries and other resources’. For the South China Sea disputes, the Code of Conduct (COC) can pave the way for agreement on international maritime norms and conflict prevention. ‘It is good that ASEAN and China have come to an agreement on a single draft negotiating text, and all of us urge quick progress and an expeditious conclusion of a meaningful and impactful COC’.

In parallel, militaries can do much to build confidence and trust through cooperation and collaboration. ‘We have seen this work in the Republic of Singapore Navy’s Information Fusion Centre (IFC), which celebrates her tenth anniversary this year’, and which ceremony was officiated by the Republic of Singapore Senior Minister of State Maliki after the IMDEX opening ceremony. Established to strengthen regional maritime security through information sharing, ‘the center hosts liaison officers from all over the world. Over the past ten years, it has consistently delivered actionable information to various maritime agencies’.  In November 2017, the navies of the ADMM-Plus platform for ASEAN and its eight Dialogue Partners to strengthen security and defence cooperation for peace, stability, and development in the region, ‘adopted and practised the Code for Unplanned Encounters at Sea (CUES) and did so again at the ASEAN-China Maritime Exercise last October, and at the recently concluded 18-nation ADMM-Plus Maritime Security Field Training Exercise. These military initiatives between regional navies reduce the risk of misunderstandings and unintended escalation between our warships’, he concluded. 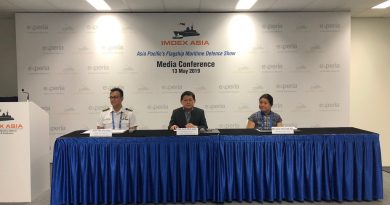