As the seventh edition of Indonesia’s tri-service exposition and forum comes to a close, it can already be hailed as a great success. Well organised every two years by the Jakarta International Expo Kemayoran, it took place in the Indonesian capital from November 2nd to 5th 2016. Indo Defence exhibition hosted some 844 companies from 55 countries, with 30 pavilions including those of Germany, India, Italy, Australia, South Korea, France, Turkey, USA, UK, Russia, South Africa, Singapore, Malaysia, Thailand, Philippines, Belarus, Indonesia, Czech Republic, Ukraine and Slovakia, an increase of about 25 percent compared with the last edition according to the organisers.

The growing number of exhibitors on the Indo Defence 2016 roster is a true reflection of rising defence spending in the region with an annual compound growth rate of 4.7 per cent equating to a more than 20 billion US dollars expected to be spent on military and security procurement activities between now and 2025. This makes Indonesia the fifth fastest budget in the world, according to figures released by IHS Markit last October.

Dominating the show was the on-going medium tank competition pitting the German Rheinmetall Marder 1 against the against new Modern Medium Tank (MMWT) developed for the Indonesian Army by a joint-venture company involving FNSS in Turkey and PT Pindad in Indonesia that was unveiled at Indo Defence. The Marder 1 infantry fighting vehicle (IFV) was in production for the German Army between 1971 and 1975 and the latest 1A5 IFV will remain in service for some years to come and the company has already sold surplus upgraded Marder 1A3 IFVs to Chile and Indonesia, Two prototypes of the MMWT have been built to date but no final decision has yet been taken in Jakarta as to which model will win the competition at the end of the evaluation period.

The MMWT is fitted with a Belgian CMI Defence two-person turret armed with a 105mm rifled gun that is fed by a bustle-mounted automatic loader with a 7.62mm machine gun mounted co-axial with the main armament. The role of the MMWT is not to engage more heavily armed and protected main battle tanks (MBT) but to engage lighter threat vehicles such as reconnaissance platforms, IFVs, troop carriers and combat support vehicles. 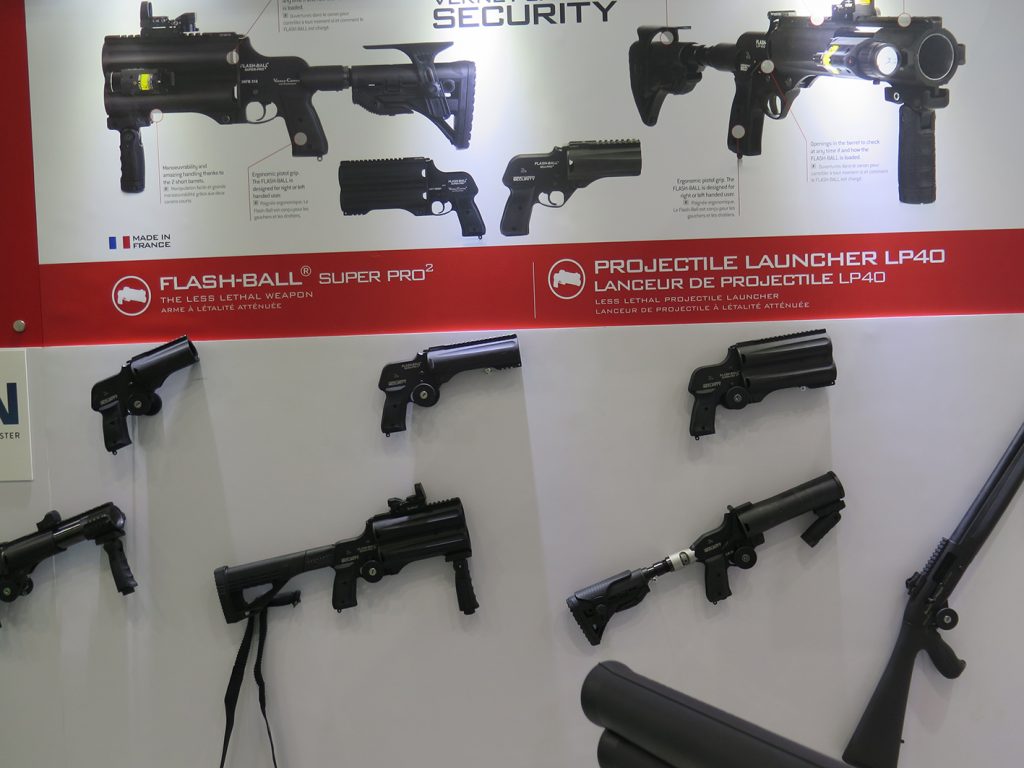 France had its own pavilion at Indo Defence grouped under GICAT and COGES. A number of French companies such as ECA, offered its latest mine-detecting drones, or Verney Carron, provider of non-lethal security weapons like the FlashBall and Flash Compact or LG56 grenade launchers. Ouvry exhibited its latest CBRN protective clothing and Bollé a family of impact resistant tactical eye-wears. Defence Conseil Internationale was also under the French pavilion.

Nexter’s 105 LG1 light towed howitzer was one of the stars of the French exhibit in Jakarta. Deployable by light vehicle, helicopter or even by parachute, the 105 LG1 is the world’s lightest 105mm assault artillery gun, and is ideal for providing supporting fire for rapid reaction forces. The 105 LG1 is currently in service with the land forces of Singapore, Thailand, Indonesia, Belgium, Canada and Colombia.

Indonesia has already taken delivery of 20 105mm LG1 light Guns and Nexter Systems is hoping there will be a second contract for additional weapons in the not too distant future.

Nexter took the advantage of the show to exhibit a model of its self-propelled CAESAR 155mm/52-calibre howitzer. Already used in combat by the armed forces of France, both in Mali and Iraq, after early deployment in Afghanistan and Lebanon, it is today also in service in Thailand, Indonesia and Saudi Arabia.

The Indonesian Army programme to update its conventional artillery capability with the acquisition of new systems with greater range and accuracy, they are deployed with two regiments, each with 18 systems plus one for training.

Also showcased was FINDART, Nexter’s firing control system, and its range of artillery munitions and Nexter Robotics’ NERVA, a family of mini surveillance and reconnaissance robots. Light and easy to carry around and deploy, Nerva is a rugged remotely operated drone system, both waterproof and shock-resistant. Its versatile platform can easily accommodate about 25 specific modules adapted for a great variety of missions.

While Dassault Aviation had only a modest presence at the show with a model of the Rafale exhibited in the Thales booth, this last company showcased many interesting pieces of equipment. Namely the Monie and Lucie night vision cameras (operating in the 3.5 µ band), land tactical radios, both hand-held and vehicle-mounted, the new TALTICOS combat management system (CMS), already in use in the Indonesian navy. A novel variant of the Thales STARStreak missile was shown with the improved performance ELMM laser proximity fuse. Today installed on the Indonesian armed forces IPTN/Airbus CN235 MPA, Thales’ Amascos combines a powerful tactical command subsystem with the latest-generation sensor suites to ensure the success of maritime patrol and surveillance missions and now benefits from new and lighter work consoles that are particularly well adapted for operations with the latest versions of the Searchmaster multifunction radar.

Airbus attended the show with models of the A400M and C295 transports and an H225M helicopter, all of which it is hoped that the company will find additional customers in Asia. Malaysia already flies the A400M strategic transport and Thailand is one of the most recent customers of the H225M Caracal. Another of Airbus aircraft was present at the show, this time in the Indonesian hall. Production of the Airbus Military C212 light transport was transferred to Indonesia in mid-2013, after the company teamed with PT Dirgantara Indonesia (PTDI) in 2011. The last C212 to be assembled in Spain was delivered to the Vietnam Marine Police in late 2013. A total of 477 C212s have been produced over a 42-year period for 92 operators. They have been used in a “variety of roles ranging from transport to rain-making, and surveillance to search and rescue,” according to the manufacturer. Today, less than 300 C212s are flying in 40 countries, the largest share (with 70 aircraft) being in Indonesia, where predecessors to PTDI (IPTN and AI) assembled the type under license at Bandung during the 1970s and 1980s. This Indonesian state-owned manufacturing company has been regularly supplying sub-assemblies for the CN235 to Airbus Military. Today it builds the NC-212, a further upgrade of the earlier C212-400, introduced in 1997 with a glass cockpit and more powerful Honeywell TPE331 engines. The NC212 is one of the very few modern light cargo aircraft able to compete with Chinese or Russian products.

The French warship builder DCNS showcase the Scorpene® submarine is designed to fulfil the entire scope of missions of modern multipurpose submarines and is fully adapted to operate, taking into account the various operational and environment conditions of Indonesian waters, in both blue and shallow waters. Also, its Gowind® 2500, the new generation of powerful surface combatant vessels, robust and well equipped, both in terms of electronics, weapons and projection capacities, with high capacity in antisubmarine warfare.

DCNS presents its offers in Marine Renewable Energies a water turbines model, floating wind turbines and marine heat energy power stations are the three products in use or in development

The Czech company Ceska Zbrojovska was present in Indo Defence. The long-standing small arms manufacturer, introduced the latest weapon of its well established CZ Bren assault rifle, to the southeast Asian Market. Retaining the best features of its predecessor, the CZ 805 Bren, the Bren 2 was designed to meet the most demanding requirements of special units and armed forces operating anywhere in the world. Available in 5.56x45mm Nato calibre, the rifle is aimed at users who require a light, versatile and absolutely reliable weapon under extreme conditions.

The Bren 2 also features an enlarged fire selector with single automatic fire modes-eliminating the two-round burst mood of the earlier model with a rate of fire of approximately 850 rounds per minute. Barrel life is rated at 20.000 rounds before replacement.

Ruag showcased a range of sophisticated and high performance, small-calibre standard and special ammunition for hunting, sports and law Enforcement, as well as pyrotechnical elements and composant for Industry in general.

They also showcased a model of the Dornier 228 Multirole (MR) aircraft which offers unsurpassed effectiveness and efficiency with superb versatility.