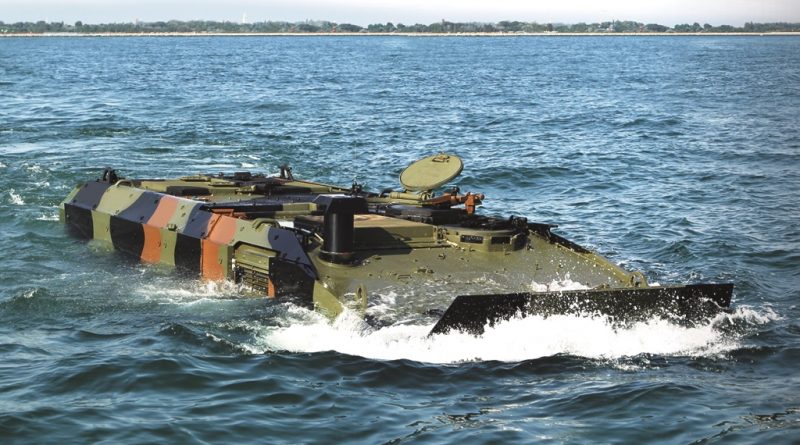 The BAE Systems – Iveco DV team 8×8 amphibious armoured platform design was selected on June 19 by the US Marine Corps as its Amphibious Combat Vehicle 1.1. BAE Systems, as the prime contractor, received a $198 million contract to deliver an initial batch of 30 ACVs, with options for a total of 204 vehicles which could be worth up to $1.2 billion.

A 30+ tonnes vehicle with over 3.3 tonnes payload, the ACV 1.1 is a derivative of Iveco SuperAV, designed according to Italian needs, improved to cope with USMC requirements, and can host three crew members and 13 dismounts. It is fitted with a remote controlled weapon station armed with a 12.7 mm machine gun or 40 mm automatic grenade launcher. Powered by an Iveco Cursor 16 700 hp engine, it can reach a maximum road speed of 105 km/h while at sea under the thrust of its propellers it can reach 6 kts (11.1 km/h); as for range, following a 12 nautical mile travel in water it can roll for over 400 km on land. The ACV 1.1 can operate up to Sea State 3 and can cope with a 2.75 m plunging surf. While the ship-to-shore connector requirement was cancelled, tests conducted in June 2017 from USS Somerset (LPD-25), a San Antonio-class amphibious transport dock, might have revived this role. On land it can climb a 60% gradient and move on a 30% side slope; 8.9 meters long, its curb-to-curb turning radius is less than 11 meters, width being 3.1 meters. A key issue for the USMC was survivability; although protection levels remain classified, the ACV 1.1, which exploits the “H” drive typical of Iveco DV 8×8 vehicles, was designed from the beginning to provide the highest possible level of mine and IED protection, as well as kinetic energy, compatible with its floating capabilities. 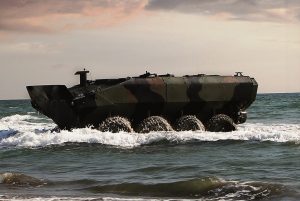 The selection came following USMC’s 15 months Developmental Testing and Operational Assessment that involved 16 ACV 1.1 prototypes, delivered to the Marine Corps in 2017. EDR Magazine understands that the delivery time will be quite short, probably around one year.

All ACV 1.1 will be provided in the Armoured Personnel carrier (APC), fitted with a CROWS RCWS. Iveco DV provides the design as well as some core components, mostly automotive, the ACV 1.1 being manufactured and assembled by BAE Systems in its York facility, where it will also  ensure integration of all on-board systems and GFEs, the share for the Italian company being around 400 million US$ over the entire programme.

A follow-up programme known as ACV 1.2 is planned, this adding more APCs as well as   specialised versions such Command Post, Recovery, Infantry Fighting vehicle armed with a 30 mm turret, probably Kongsberg Protector MCT-30; although not currently part of the variants, an ambulance version might also be considered.

The success in the US will definitely make the ACV 1.1 the benchmark for 8×8 vehicles aimed at amphibious troops. Italy might well be the second customers, funds permitting. The need is to equip the Joint Landing Force, which has two amphibious infantry battalions, one Navy and one Army, the requirement considering respectively 72 and 62 vehicles. To the variants already mentioned for the UMSC ACV 1.2 requirement Italy is also looking for mortar carrier, ambulance and repair versions of the 8×8. As for the IFV, this should be equipped with Leonardo’s HITFIST OWS (overhead weapon station) armed with a 30 mm cannon. Heavy fire support would be provided by the Centauro II, the Joint Landing Force exploiting Army combat elements taken from a capability basket earmarked for the amphibious role.

Italy is part of the combined Spanish-Italian Amphibious Brigade (SIAF), the Spanish Tercio de Armada having a requirement for 8×8 vehicles to replace its Piranhas and MBTs, thus a solution based on the 8×8 vehicles of Italian origin might make sense, as it would also consistently ease the logistic burden within the brigade itself, not to speak of the commonality with the USMC, which remains the reference for the western world in terms of amphibious capability.