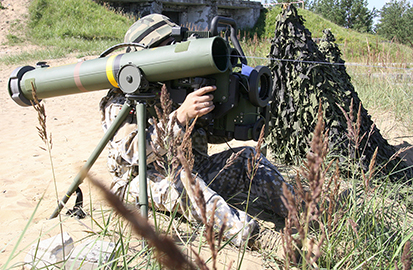 The Latvian MOD signed on Monday (February 12th ) a contract in the amount of 108 million Euros, with EuroSpike GmbH, for production and delivery of a variety of Spike Family Missiles. The Spike Family consists of 4th and 5th generation electro-optical missile systems, providing high precision and high lethality against various targets, including advanced MBTs.

The SPIKE system was developed by Israeli company Rafael Advanced Defense Systems Ltd., which is also involved in the deal as a subcontractor through EuroSpike with Diehl Defense GmbH & Co. KG and Rheinmetall Defence Electronics GmbH.

SPIKE is in operational use in over 29 countries, including many NATO countries. Over 29,000 missiles have been supplied. Approximately 5,000 SPIKE missiles have been fired in combat and in training. SPIKE has been integrated on more than 40 platforms, aerial, vehicular and naval, including from modern remote-controlled weapon stations.

Each year, the “SPIKE Users Club” is convened in a different country in an event organized by NATO/NSPA, to give SPIKE users the opportunity to share their SPIKE experience and hear about new SPIKE developments.