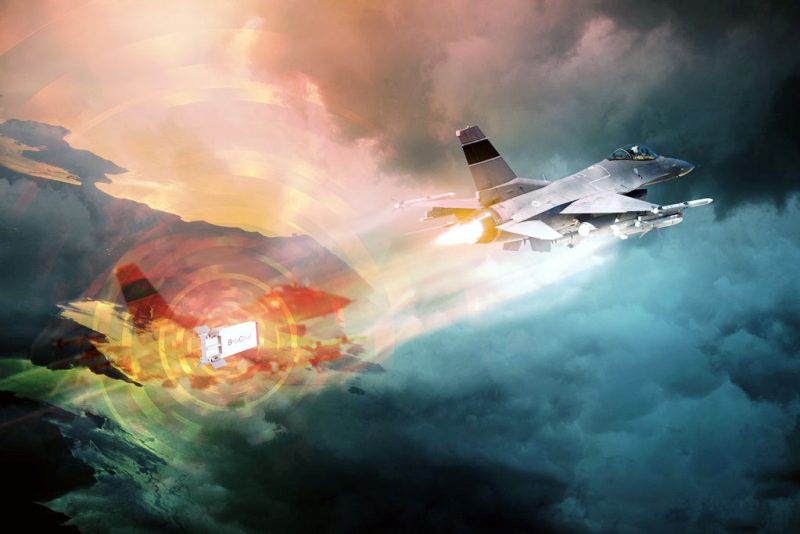 Albeit with a reduce presence on its stand due to COVID considerations, Leonardo is actively pursuing some marketing campaigns in the UAE and the Middle East at large in numerous areas. One of the most promising is definitely that of aircraft protection, one of its key products in this field being the BriteCloud.

Available in two variants, the BC55, a 55 mm diameter decoy weighing 1.1 kg, and the BC218, the number indicating the size, 2x1x8 inch, and a weight of 0.5 kg, it fits the two standards of western dispensing units,

“It can be thought of as a towed radar decoy without being towed,” this is the definition of the BriteCloud by Rob Laidlar, Head of Strategic Sales Campaigns Electronic Warfare at Leonardo. “It generates a signal which seduces the threat and moves the aiming point of the threat system a lot further from the parent aircraft than a towed radar decoy, creating a large miss-distance.” Unveiled to the public over five years ago, according to Laidlar the BriteCloud is still cutting-edge, as no comparable products have apparently yet surfaced from competitors. “Despite its size, our system contains everything it needs to be effective: transmitters, receivers, a power source and a Digital Radio Frequency Memory (DRFM) jammer,” Laidlar explains.

“Of course things will evolve in decades to come, but right now BriteCloud is hugely relevant, particularly to nations and partners who wish to bring a high level of RF protection to a platform, in a way which minimises integration costs. On any platform type, be it helicopter, large aircraft, fast jet or unmanned air vehicle, if you have a radar warning receiver to tell you that you are being targeted and if you have a dispenser with which you can deliver expendables, you can benefit from BriteCloud’s extremely high level of protection. In my opinion, that is unique in the world at the moment,” Rob Laidlar states.

Discussing system flexibility towards a rapidly evolving threat, Leonardo’s Head of Strategic Sales Campaigns Electronic Warfare provided us with a two-fold answer. “On a sortie by sortie basis you can update BriteCloud for maximum effectiveness against the threats you are likely to face by programming the mission data set in line with the expected threats and their emissions. If intelligence reveals the appearance of a new threat within the enemy ORBAT, then you can rapidly re-write the mission data set and load it onto the BriteCloud,” he said. Asked to confirm that the BriteCloud cannot be re-programmed in flight, the answer led EDR On-Line to understand that this is not feasible for the time being, but apparently such a capability might appear in due time. In the longer term, should a new technology and a new threat come into a theatre, Leonardo would adjust the mission data set, however for the time being “we are confident that BriteCloud’s capability will remain effective against current and next generation threats. We are also well aware that there will be an ongoing developmental battle between new threats and countermeasures, which is why Leonardo invests so much company money in keeping our products relevant, scanning the horizon for new threats and developing our products accordingly.” Rob Laidlar says, underlining also the importance of the close relationship to UK science and operational entities within the UK MoD, DSTL and RAF, to keep BriteCloud extremely relevant against the opponents’ systems.

Born to provide protection to fast jets, typically the most expensive and complex platforms to require such protection systems, now Leonardo’s DRFM countermeasure is being considered for a range of other kinds of platforms because of the rise in the range of air defences; “larger aircraft are now potentially putting themselves in harm’s way, with AEW, MPA, air refuelling aircraft, tactical and operational transport aircraft now needing to operate within the range of new threat systems, so they’re beginning to require protection,” Laidlar adds. And this is where the BriteCloud 55-T comes into play; announced in mid-2018 and available since 2019, this version answers the need of larger aircraft, which require a more powerful decoy in order to mask the larger radar return that they produce. The 55-T power enhanced variant fits into standard 55 mm chaff and flare dispenser, or can be fitted to a square format dispenser using an adapter magazine, no further integration work being required.

“In the last three months we have completed a series of very successful trials, firstly with General Atomics Aeronautical Systems Inc, who we partner with on a number of capabilities including the provision of our SAGE ESM and Seaspray AESA radar for the MQ-9B. We are working with GA-ASI to make BriteCloud the RF protection system of choice for their new self protect pod on the MQ-9. We did some inert live airborne trials to show the safe separation of BriteCloud from that platform, so we have ejected a number of rounds with GA-ASI, collecting telemetry that allowed us to verify the safe ejection. This was a precursor to full integration of BriteCloud to protect the MQ-9 from RF threats,” Rob Laidlar unveils to EDR On-Line. The second work recently accomplished took place with the German MoD and Airbus, working on an undefined UAV; “they carried out a successful trial of BriteCloud which saw live BC218 rounds ejected from the UAV during flight, allowing the aircraft to successfully defeat a high end radar threat system.”

Switching to the Middle East market area, it is clear that the evolution of threats might differ from the European scenario, “the only certainty being uncertainty,” as Rob Laidlar puts it, “This is the reason why the work with our Middle East partners and colleagues is so important, as we help them to prepare for uncertainty and the unknown.” In May 2019 Leonardo announced that its system would be evaluated under the United States Office of Secretary of Defense (OSD) Foreign Comparative Testing (FCT) programme, which could lead to BriteCloud entering service with the United States Air Force (USAF) Air Combat Command and other US services. Currently tests are ongoing with the US Air National Guard on the F-16 platform; “We are confident that over the coming months the successful completion of that trial will lead to BriteCloud 218 being granted flight clearance for the F-16 Viper. In the Middle East, we are working hard to get BriteCloud onto the platforms operated by our regional partners as soon as we can, not only on those fast jets but also across a range of other ones such as helicopters, UAVs and transport aircraft. This will be supported by obtaining that full flight safety clearance, which will ease the route for friendly nations to get that capability onto the F-16, and we are working with a number of nations in the Middle East to explore BriteCloud integration options on their platforms.” For the time being no more details were unveiled, but Rob Laidlar is confident that he will be able to tell us more in the coming months, not only on sales activity but also on deliveries for demonstration and trial activities in this geographic area. 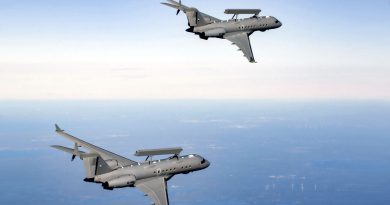 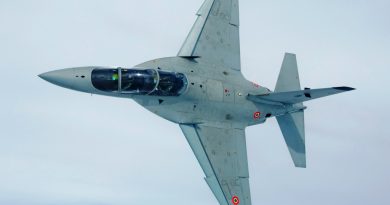 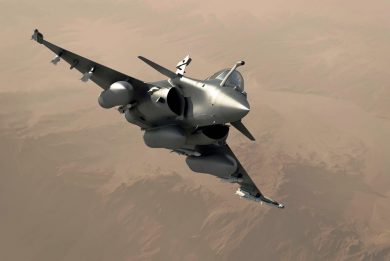