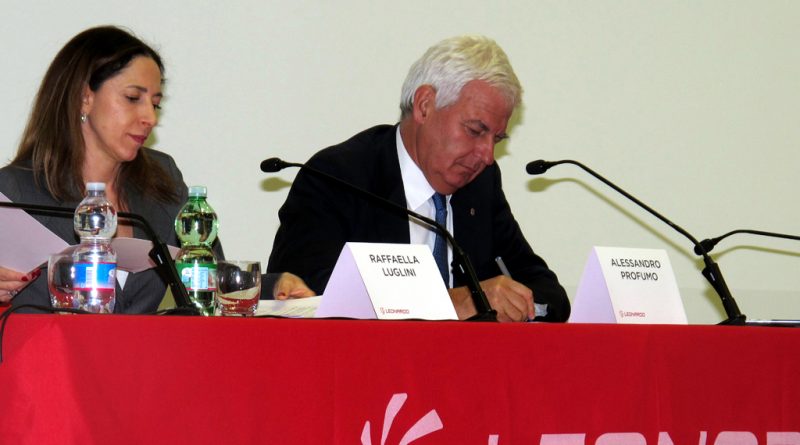 Compared to previous estimates Leonard’s performances for 2017 will be lower, this being mostly due to Leonardo Helicopters underperformances. The group industrial plan for the 2018-22 was illustrated by Leonardo’s CEO, Alessandro Profumo, at the Vergiate helicopters facility in front of investors, the meeting being then followed by a press conference.

Compared to the 12.0-12.5 billion Euro new orders estimates, these will account for 11.3-11.7 billion, although the most recent export order for the C-27J is not included, as it still has to get the very final approval by some national authorities. Revenues will be in the 11.5-12.0 billion range, Alessandra Genco, Leonardo’s CFO announced, while Earnings Before Interest, Taxes and Amortization (EBITA) will be much lower than expected 1,250-1,300 million, expectations being for 1.050-1,100 million Euro. The group net debt will be slightly higher than scheduled, 2.6 billion Euro instead of 2.5, but the higher sum accounts for the US bond buyback. Looking at 2018, revenues will remain stable as well as the debt, EBITA increasing slightly to 1,075-1,125 million, the data that will increase more being new orders, which shall reach 12.5-13.0 billion. While defining the re-set in 2017 “disappointing”, Profumo looks positively at the 2018-22 timeframe: “we aim at a 6% Compound Annual Growth Rate (CAGR) for our orders intake, which means a 70 billion Euro orders over the five years period,” he said. He also said that Leonardo will absolutely maintain its shares in MBDA. As for DRS, Leonardo’s company in the United States, he sees an increase in its EBITA, and foresees for 2018 some important potential events; “it is not the time to talk about an initial public offering of DRS,” he said. Leonardo’s CEO also stressed the importance of the new commercial organisation, that falls under Chief Commercial Officer Lorenzo Mariani. The CCO underlined the importance of the new integrated organisation born within the One Company approach, which will be considerably strengthened: the 25 offices and subsidiaries existing at the end of 2017 will be joined by 12 more representative offices in 2018-19 and by 14 more in 2020-22. His organisation is involved in over 70 key campaigns that account for over 20 billion Euro, excluding the United States where Leonardo is bidding for important programmes such as the TX trainer. Beside systems sales, Mariani also looks at an increase in customer support revenues, currently representing less than 20%, to over 25%.

As said initially, the helicopter business failed to reach its targets in 2017. A few months after taking over as CEO, in May 2017, Profumo decided to change the helicopters business management, appointing Gian Piero Cutillo, formerly the group CFO, as Managing Director of Leonardo Helicopters. “We identified our deficiencies, and there are no structural problems,” Cutillo explained to the audience, underlining missed opportunities in the military market, the loss of governance, the lack of flexibility of the supply chain, and the partial inability to fulfil customers requests. Beside internal problems, the helicopter segment of the group was of course heavily hit by the decline in the civil market sector, -45% from 2013 to 2016. What was even worst was that the offshore segment market, key for Leonardo Helicopters, fall from 2.2 to 0.6 billion US$. All this led to a reduced profitability, which has been defined as a “high single digit”, when it used to be in the two-digit range. Leonardo Helicopters plans to reach again a two-digit figure in profitability in 2020, thanks to a series of measures adopted to address deficiencies, and exploiting the forecasted growth on the civil market, estimated at a 5% CAGR, while the military market should be hit by a –2% CAGR.

In the fixed wing business, Profumo underlined the efforts made to reduce costs on the two company best sellers, the C-27J Spartan and the M-346 Master. The former is performing well, the latest contract being for a maritime patrol version, Leonardo’s CEO announced. As for the trainer, which is fighting for the T-X programme aiming at replacing the Northrop T-38 Talon in USAF service, Profumo said that we must not consider the aircraft cost on its own, but that of the Phase IV trained pilot. The company is investing in the new configuration, such as the fighter attack one. This is one of the programmes aimed at upgrading existing products that receive 60% of the company R&D funds, estimated at 12% of the revenues, 35% going to new products and 5% to research and technology.