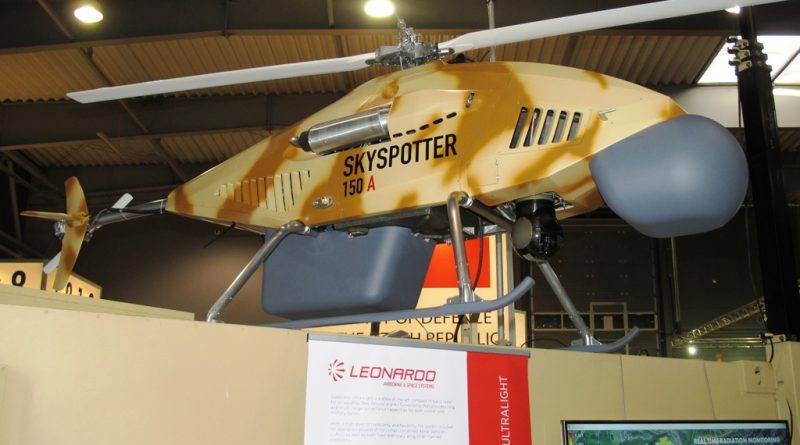 At the presence of the Czech deputy-Prime Minister of the Minister of the Interior LIAZ (Liberecké Aero Závody) unveiled its SkySpotter 150A rotary wing UAV. While one of the airframes was fitted with the optronic suite and with a radiation scanning sensor, the second was fitted with the Gabbiano Ultra Light and was shown over the ground control station, hosted in a shelter, which allowed visitors to observe recorded views as well as live views taken from the optronic ball.

The platform development work started in 2013 and has been entirely carried out on company funds. The SkySpotter 150A has a two-blade rotor with a diameter of 3.418 meters, the airframe being 3.271 meters long. Empty weight with electro-optic gimbal is 110 kg while MTOW is 150 kg, 40 kg being available for the main sensor and fuel. The 150 kg MTOW is imposed by civilian regulations, LIAZ currently being testing the military MTOW. Propulsion is provided by a four-stroke Wankel rotary water cooled engine with a fuel consumption of 5-8 kg per hour, that allows the UAV to reach a maximum speed of 120 km, with an endurance of 7 hours, fight level reaching 4.300 meters above sea level. The data link allows to fly the SkySpotter 150A up to 100 km distance, although using automatic flight with pre-programmed path via waypoints the UAV can fly for 300 km. 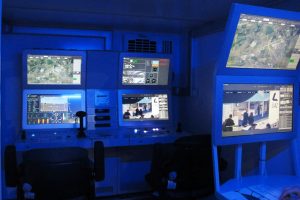 In 2017 LIAZ started a cooperation with Leonardo to integrate the Gabbiano Ultra Light in its UAV; a 24 kg payload, the air cooled X-band radar is fitted in a parallelepipedal container under the aft part of the helicopter while the antenna is fitted in the radome at the front of the aircraft. The Gabbiano UL ensures a ±90° scanning coverage and can work in spot synthetic aperture radar and strip synthetic aperture radar high resolution modes, providing a submetric resolution over wide swath areas, as well as in GMTI mode, allowing detection of moving targets on ground, with ranges in excess of 40 NM (74 km). An electro-optical gimballed sensor is carried just behind the antenna, ensuring detection of a man size target at over 800 meters and vehicle targets at 2.2 km in daytime, data for thermal tracking becoming 1.75 and 4.5 km. The SkySpotter 150A can also be fitted with a ground penetrating radar or with a spectral scanner.

According to Ing. Vojtěch Pražma, Chairman of the Board at LIAZ, the intent is to actively promote the new UAV at national and NATO level, and he will consider a success to reach some success in two years time. LIAZ is also targeting Africa, the Middle East and the Far East, the company aiming to start demonstrations at potential customers locations in early 2019, following a series of requests.