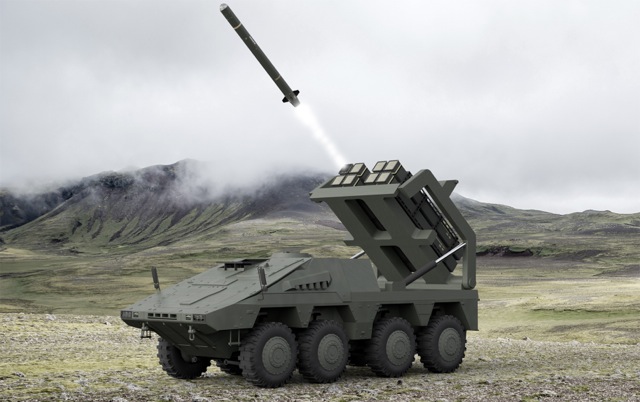 MBDA exhibited new concepts for Army precision effects at the Defence Vehicle Dynamics (DVD) exhibition at Millbrook Proving Ground. MBDA’s Future Land Indirect Fires proposes a set of concept capabilities to respond to the future surface-to-surface needs of the British Army. One of the concepts on display is designed to provide the ability to flexibly engage difficult targets at range with agile targeting
methods and a high degree of discrimination. This included an Artec Boxer 8×8 infantry fighting vehicle (IFV) mission module launcher, a containerised launcher, and future missile capabilities to deliver the solutions the British Army need.

Earlier this year it was announced that the British Army would re-join the Boxer programme to modernise its vehicle fleet and meet its Mechanised Infantry Vehicle (MIV) requirement. The UK Defence Equipment and Support (DE&amp;S) is in negotiations with the Organisation for Joint Armament Cooperation (OCCAR) and the consortium manufacturing the Boxer IFV, Artec with the aim of having the first vehicles in service by 2023. At least 60 percent of the manufacturing process needs to be UK based.

The eight-cell land indirect fire mission containerised launcher module would incorporate a 178 mm surface-to-surface weapons with either radio-frequency (RF)/semi-active laser (SAL) or electro-optic/infrared (EO/IR) seeker options. These could be based on a number of technologies developed for the MBDA missile portfolio, including developments of the 178 mm Brimstone and Spear missiles, as well as the 166 mm Common Anti-air Modular Missile (CAMM) family with active RF-seeker.