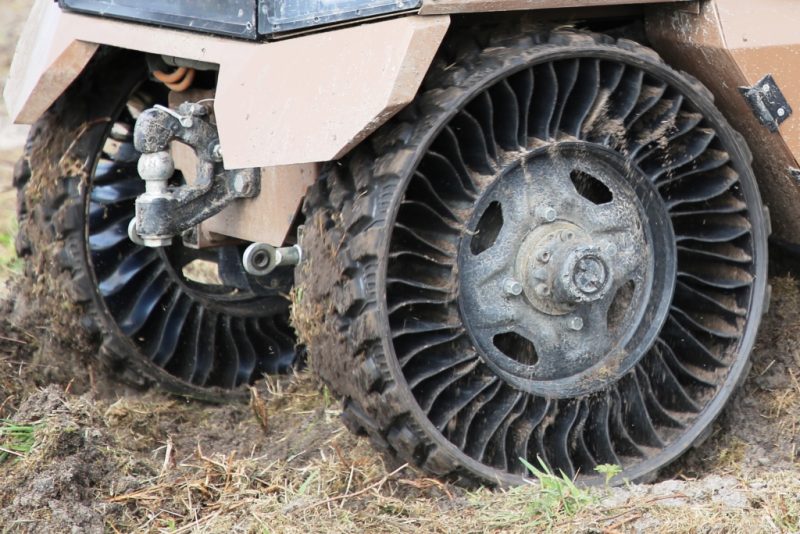 The unmanned ground vehicle moves on difficult terrain, its task being to reach a vantage point to provide the best possible situational awareness to the advancing formation without putting soldiers’ life at risk. However a tyre gets punctured along the way, and the 4×4 gets stuck and the mission has to be called off, as without crew there is no way to replace the tyre. One of the key issues with UGVs is reliability, the one concerning mobility including tyres that cannot be punctured.

Developed for other uses, skid steering working vehicles and golf carts, as they tend not to spoil the green, airless tyres have seen a growing use in the military, This trend started in the United States, where these are defined “Non Pneumatic Tyres”, and Michelin was at the origin of this concept. Michelin is continuing investing in this field, its product being known as Michelin X Tweel.

Currently the French company is marketing the second-generation Tweel airless radial tyres, the Michelin X Tweel SSL 2. Two models are available, one aimed at all terrain use while the second is destined to vehicles moving on hard surfaces, the former being of course the one used on military vehicles.

While in a standard pneumatic we find the shoulders and sidewall that link the tread to the hub, these containing the air which pressure allows carrying the load, in an airless tyre this is replaced by high strength, polymer spokes. Their hardness is studied in order to ensure good carrying capacity while absorbing impacts therefore dampening the ride, improving comfort or reducing the stress on stabilisation systems. The spokes link the hub to a proprietary semi-rigid shear beam, a zero degree belt being fitted under the tread. The latter is designed to provide optimal traction in most circumstances, its traction performances being remarkable. What an airless tyre can’t do is to be deflated for decreasing ground pressure via a central tire inflating system.

The Tweel has a ground pressure around 2.5 bar, which remains obviously constant, therefore it is not the optimal choice if very fine and dry sand surfaces have to be crossed for a long distance. However, on any other type of soil such as compact sand, mud, snow, hard surface and, asphalt Tweel tyres are totally reliable, robust and efficient according to Michelin.

Currently Tweel tyres are available in two sizes, 26x9N 14 and 26x11N 14, maximum load for bigger ones being 700 kg, for a maximum speed of 100 km/h. Michelin is currently studying a new version that might increase the load up to 1,300 kg, which might be available in a few years time. The company is wondering if to further push the concept, to 2-3 tonnes load, the spokes architecture will remain viable or if it will be necessary to adopt a wholly different architecture and concept.

Beside their use on UGVs, that on ATVs would allow providing Special Forces with a solution that will ensure getting the mission done; ballistic tests carried out in the United States proved that even with just a few spokes left Tweel is able to work, although in degraded mode hence at lower speed.

In 2024 Michelin should start marketing its UPTS, for Unique Puncture-proof Tire System, for commercial cars, based on concept similar to the Tweel but aimed at load and speed. In due time the experience acquired with the UPTS might well bring to further evolutions in the military field. 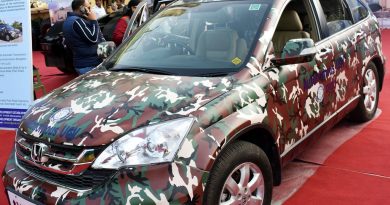 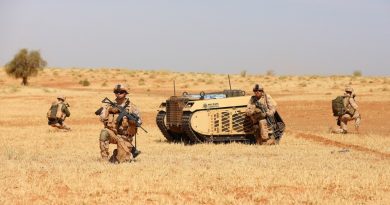