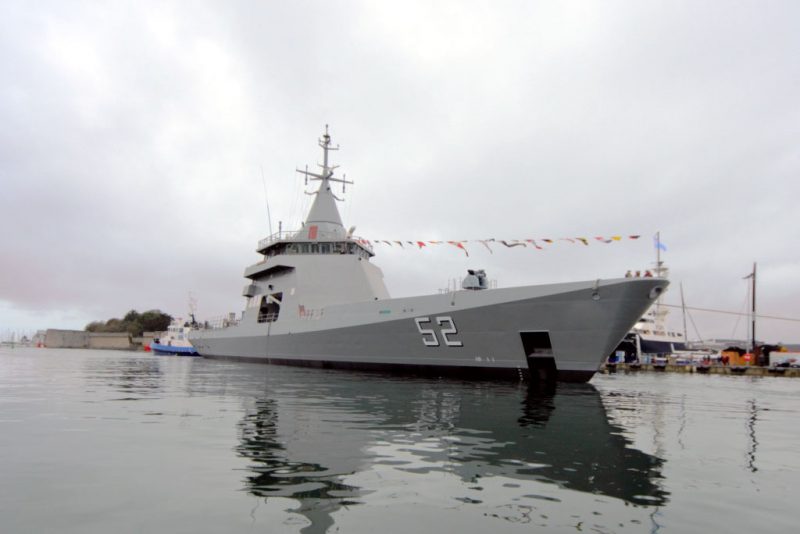 Concarneau, 1st October 2020 – The second of the four Offshore Patrol Vessel (OPVs) ordered by Argentina has been launched at Piriou’s Shipyards in Concarneau (Britany).

After the arrival of the A.R.A. Bouchard in Argentina on February 2020, the second OPV has been launched this Thursday 1st of October, 2020, in Piriou’s shipyards in Concarneau. This launching comes ahead of schedule – 2 months before the contractual deadline – despite the adverse sanitary context. The two upcoming ships are also built by Kership (joint venture between Naval Group and Piriou) in Lanester.

Signed on June 22nd, 2018 in Buenos Aires, the contract for the delivery of four multi-mission ocean patrol vessels for the Argentinian Navy came into force on February 13th, 2019.

This contract covers the delivery of L’Adroit – a vessel commissioned at the end of 2011 and operated by the French Navy before being modernized to become the A.R.A. Bouchard – as well as the construction of 3 new units with an enhanced design (known as OPV 87). The three new vessels are specially adapted to navigation in iced waters of the Southern Ocean, through a reinforcement of their structure.

Naval Group is the Prime Contractor, in charge of the Program Management and the relationship with the Argentinian customer, of the general design work of the armed vessel as well as of all the studies, development and integration of the Polaris combat system. Over 100 professionals are fully dedicated to this successful program. This is an important milestone for Naval Group as this ship is the first OPV built for the export market.

“This project is a great pride for the Naval Group teams. We are proud of the successful collaboration with Piriou. This OPV meets all the expectations of the Argentinian Navy. Her design has been specifically adapted for the navigation in the Southern Ocean,” explained Olivier Michel, Naval Group Sales Vice-president for Latin America.

The OPV 87, a multipurpose ship

Involved in several military operations but also fisheries policy and maritime security missions, the Naval Group OPV’s design demonstrated its efficiency and the relevance of the innovations developed by Naval Group to serve navies and special forces.

The Argentinian Offshore Patrol Vessels benefit from the innovations proposed by Naval Group and the sea-proven design operated by the French Navy.

A strong endurance and an excellent sea-worthiness; A 360° visibility from the bridge and a unique mast for a panoramic radar coverage; The discrete and safe implementation in less than five minutes of fast crafts for Special Forces thanks to an ingenious ramp system at the rear of the patroller;

This range of ships also benefits from Naval Group expertise in terms of information and commandment systems, allowing an extended surveillance of the maritime space and the automatic detection of suspect behaviors thanks to the Polaris, a system specifically developed by Naval Group for state missions at sea that is sea-proven by the French Navy.

The Offshore Patrol Vessel is able to stay at sea for more than three weeks, to reach a speed of 20 knots and to accommodate a helicopter in its hangar. Operated by a reduced crew of forty members, she is also able to accommodate extra passengers. 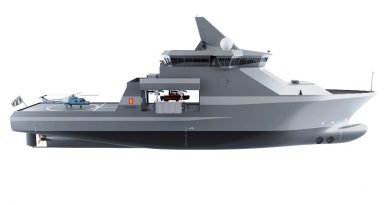