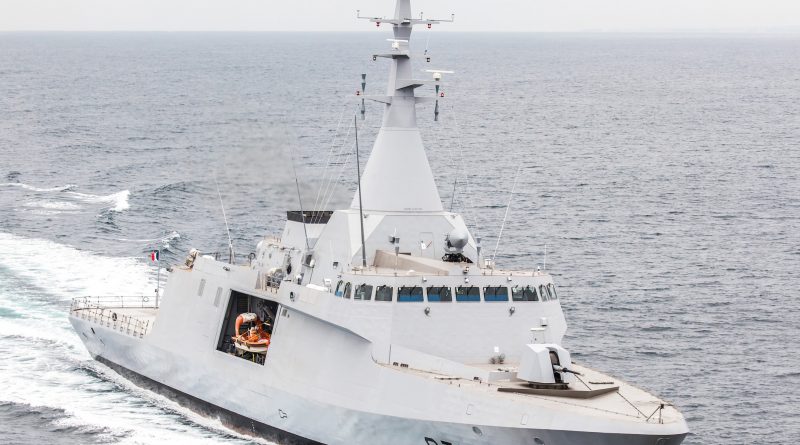 Naval Group will showcase at BSDA its Gowind® 2500, a multi-mission corvette designed for combat and its equipment.

The Gowind® 2500 is Naval Group’s response to 21st century defence and security challenges. The platform is sea-proven and combines unrivalled stealth features, resilience and high availability with outstanding anti-air (AW), anti-surface (ASW) and anti-submarine warfare (ASuW) performance thanks to the MU90 and to the CANTO®-V.

The MU90 is the sole totally new lightweight torpedo in the world. Designed and built with the most advanced technology, it is capable to counter any type of nuclear or conventional submarine even acoustically coated, deep diving, fast evasive, deploying anti-torpedo effectors or bottomed in littoral areas. The CANTO®-V represents a breakthrough in the field of anti- torpedo defence. Based on dilution/confusion concept, it is the only solution capable of protecting surface vessels against both the most advanced and the previous generation torpedoes.

The Gowind® 2500 is operated with the SETIS®. This state-of-the-art combat is combat-proven on the French Navy’s FREMM frigates and interoperable with NATO systems. It provides the operator with the best management and decision-making aids, ensuring the Gowind® 2500 supremacy over conventional and asymmetric threats.

As for submarines capabilities, Naval Group will present The Scorpène® 2000, a submarine ideally suited for action and operational effectiveness. It fulfils the entire scope of missions: anti- surface and anti-submarine warfare, strikes against land-based objectives, integration in a naval force or a joint NATO operation, special operations, offensive minelaying, area surveillance and blockade,intelligence gathering. Integrating the improvements from Barracuda, the Scorpène® 2000 has the latest cutting-edge capabilities.

This partnership will enable SNC to benefit from Naval Group’s centuries-long expertise in military shipbuilding and fully mastered transfer of technology process. It will ensure the Romanian industry is implicated in the conception, the construction and the maintenance of the ships, ensuring Romania’s sovereignty and creating high added-value jobs on the long term.