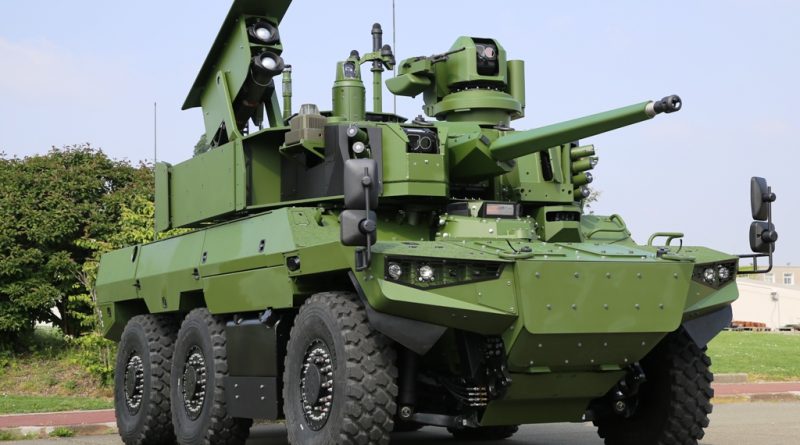 May 16th 20018 marked the first public appearance of the Jaguar 6×6 contact reconnaissance vehicle, the second of the French Army Scorpion programme vehicle to become reality. The event took place on Nexter’s premises, the company being part of the Scorpion team together with Renault Trucks Defense and Thales. The vehicle is 7.8 meters long, including the gun at 12 o’ clock, 3.0 meters wide and 3.5 meters high, and has a combat weight of 25 tonnes. The 6×6 chassis was developed by RTD and is fitted with a Volvo engine providing 500 hp, coupled to the same ZF automatic six-speed transmission used in the Griffon 6×6 APC. It is to note that the reverse movement is obtained through an inverter and not through the transmission, which provides a much higher reverse speed. To reduce the vehicle’s length the engine and transmission, located at the back, are not mounted in sequence but in a ”U” configuration, through a horizontal transfer box. On road the Jaguar uses the four rear wheels, the 6×6 traction being used only when going cross country, differentials being blocked progressively, depending on terrain conditions. The suspensions, provided by Quiri, allow to change the ground clearance depending on situations, lower on roads and higher in cross country, suspensions stiffness also changing depending on the height. An extra-low position allowing to better hide the vehicle when observing; it is also used for maintenance, to ease access to some elements, and when the vehicle is transported by rail. To reduce the turning radius both the first and third axle are steerable. 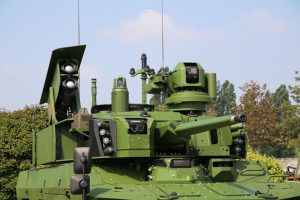 The Jaguar is fitted with the same pneumatics adopted on the Griffon, and is equipped with CTIS and run-flat systems. The front and rear axles are identical to those of the Griffon, which increases commonality, each axle being able to carry 9 tons. The Jaguar has a range of 800 km thanks to its 465 litres fuel tank; the one in the prototype is provisional, the final design foreseeing ne fuel tank heavily protected and one less protected but of the self-sealing type. The driver, located at the centre, has at his disposal three screens, two on the left and one on the right, the latter used to show all mobility parameters. His hatch is fitted with thee episcopes, the central one being bigger, as it provides a wider field of view, and it can fuse in the images provided by dedicated E/O sensors. No details were provided on electric output, the Jaguar being equipped with six batteries, currently of the standard lead type. Beside the two prototypes that have just been finished, two mobility test vehicles were produced, one of them having carried out durability tests for the last six months; in these vehicles the 6.5 tonnes turret is replaced with an equivalent weight. According to the Jaguar team design is frozen at 80-90%, some improvements being foreseen i.e. in the stealthness area. 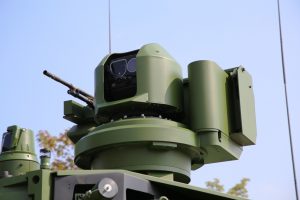 Coming to observation, the commander, located on the right side of the turret, can use an all-optic panoramic sight located at the centre of the turret, as well as Safran’s dedicated Paseo electro-optic all-digital panoramic sight fitted on the remotely controlled weapon station. His hatch s fitted with episcopes allowing a 360° view. As for the gunner, seated on the left, he is also equipped with a direct optical channel, on the left, and with a Safran E/O viewer, on the right, aligned with the gun. Close situational awareness is provided by Thales’ Antares, which also doubles as a laser warning receiver, two being mounted, one front right and one rear left, to provide all-round coverage. A Metravib Pilar V acoustic sensor is also installed. Thales also provides the entire vetronic architecture of the Jaguar.

Coming to firepower, the Jaguar main weapon is the CTAI 40 mm telescoped cased gun; HE, APDS and ABM munitions are available, the gun effective range being between 2,000 and 2,500 meters. A total of 180 ready rounds are available. For longer range engagements against heavy armour two MBDA’s MMP missiles are available in a twin launcher fitted on the right side of Nexter’s two-man turret and controlled via the gunners sight. Two reload missiles are available in the hull. The RCWS fitted on top of the turret is produced by RTD and is dubbed T3, being a dedicated model specifically designed for the Jaguar although it uses some components of the other RCWS developed for the Scorpion programme, such as the electric motors; it is usually armed with a 7.62 mm machine gun, and hosts 550 rounds. The Jaguar is fitted with Galix grenade launchers providing 360° coverage, four launchers being fitted on each side of the turret, while two per side are embedded in the rear armour. 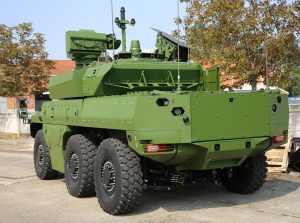 As for protection, levels remain classified. The survival cell hosting the crew is made of aluminium and then fitted with add-on armour, various ballistic, mine, IED and RPG kits being available. Thales provides the jammer which is part of the DGA Barage programme, while in the long term the vehicle might be fitted with an active protection system against missiles and RPGs, a system being under development at TDA as part of the Diamant programme, the Jaguar being fitted for receiving such system. As for communications, the vehicle will be equipped with one Thales Contact radio, allowing simultaneous data and voice communications in VHF and UHF bands, and with two PR4G radios.

Two prototypes of the Jaguar will be visible at Eurosatory next June, one on the French Army stand and one at Nexter’s stand. Following the exhibition the prototypes will start the test programme, first firings being expected for late 2018.

MBDA Confident of the Future 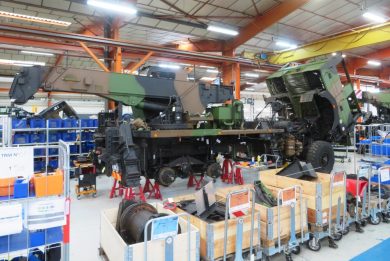