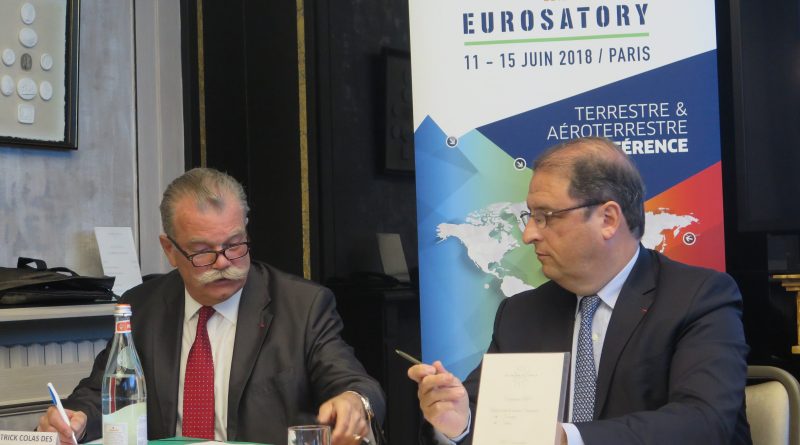 A mere few weeks before the event, the traditional GICAT and COGES run EUROSATORY press conference took place  today 17 May 2018 in Paris’ Hôtel Napoléon ready to showcase the show and its novelties.

GICAT’s President Stéphane Mayer gave a global overview on GICAT, which is a grouping of 245 industrial defense and land and air-land security companies of different sizes and about its 100% subsidiary COGES Association, which is dedicated to the international promotion of the French industry and terrestrial and air-land security and its sectors. It generates several targeted events, both in France and abroad, such as EUROSATORY of course and others.

Mayer recalled that EUROSATORY is the world’s prime and largest exhibition for the defense and ground security industry, with an 11% increase in exhibitors for this year’s venue.

He welcomed the new French 2019-2025 military procurement law recently passed in Parliament and which is now under consideration in the Senat. This multiyear law will provide timely, effective, reliable and well-supported equipment, including those for the Scorpion programme.

The name of the game is now to prepare the ‘technologies of the future’ with Scorpion Step 2, accelerate the deliveries of Stage 1 with completion of planned delivery around 2025, and ultimately fill the hardware temporary capacity lull and change the current maintenance procedures in operational and industrial condition. Finally, the law will oversee the renovation of some 200 Leclerc tanks for the French Army, in time to deal with future dangers.

COGES’ Chief Executive Officer Patrick Colas des Francs reported that Eurosatory 2018 will bring together more than 1750 exhibitors, 11% more than in 2016, of which 66% are international, hailing from more than 60 countries. There will be besides 36 national pavilions, a total of 37 foreign pavilions on a total surface of 167 217 square metres. Some 230 delegations are expected with 1,500 VIP visitors, 200 VIP experts, 58,000 professional visitors and 70 scheduled conferences.

In the outdoor side of ESY18, some 200 vehicles will be exposed plus several helicopters and drones.

The novelty of this years’ show is the opening of a new hall : Hall 5B with over 11,000 square metres which comes on top of the other two Eurosatory habitual indoor exhibition halls​​.

Present for the first time at the show, the Eurosatory Lab will be able to accommodate up to 70 start-ups from around the world, selected for the quality of their project.

Finally, the dynamic demonstrations of the French Army, those form the Préfecture de Police (namely the BRI — Brigades of Research and Intervention — and the Pompiers de Paris or Paris Fire Brigade-BSPP) the French Army Special Forces and the GIGN should square out the dynamic demonstrations programme at EUROSATORY. They will last all day Sunday for the press and twice a day of the show from Monday on.