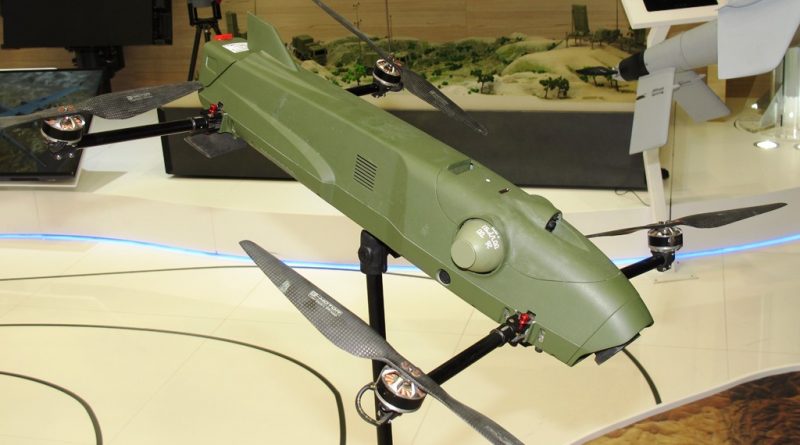 Circling over a potential target area and hitting at very short notice an elusive target is a real plus for a military unit. Manned aircraft and armed UAVs can do this, but at the lower end of the spectrum a new breed of weapon systems has emerged, that of loitering munitions. Israel Aerospace Industries is definitely a key player in this area, its long-range long-endurance Harop dating from 2009. At Eurosatory IAI unveiled its Rotem 1200, a quadcopter to be used at firing team or platoon level to cope with targets in urban scenarios or hiding over the hill. With a MTOW of 5.8 kg, it carries a warhead capsule containing two M-67 hand grenades, its weight being 1.2 kg, the Rotem has an endurance of 30 minutes, its operational range being 10 km, maximum operational altitude being 1,500 meters. Typical air speed is of 36 km/h, maximum speed being 90 km/h. The Rotem 1200 is fitted with obstacle avoidance sensors, used in urban operations, while its optronic sensors used for observing and acquiring the target include a thermal seeker that is also used in the auto-tracking mode. IAI declares a CEP of less than one meter, which ensures a nearly nil risk of collateral damages. If no target is acquired the air vehicle can return to base and be readied for a further mission, as the safe and arm mechanism has been purposely designed to ensure safe recovering and reloading. However the Rotem 1200 is far from being only a loitering munition; the modular payload concept adopted together with the open system architecture used allows to easy shift from one payload to another, a typical one being an ISR capsule fitted with a dual gimbal payload with day/night capabilities. COMINT sensors, as well as acoustic ones for fire detection, can also be installed. With the ISR capsule, which is lighter than the warhead one, endurance grows to 45 minutes. The Rotem 1200 systems comes with two air vehicles, which can be readied in less than one minute, battery packs and a tablet-based GCS with integral communication node, the same used also in the fixed-wing Green Dragon, currently in the final development phase.

While the Green Dragon is ready for production, the latter system is considered at TRL 7-8. A 1.6 meters long, 1.7 meters wingspan airframe, the Green Dragon is launched from a 2 meters long, 0.3 meters diameter, sealed canister, the total weight being 22 kg. The MTOW is 15 kg, 2.5 kg being the weight of the anti-personnel/antitank warhead currently declared, the target being 3 kg. The airframe is fitted with an electric motor that drives a pushing propeller, maximum speed being 110 knots while loitering speed is between 65 and 86 knots. Endurance is of 75 minutes, but might double in the final version, while operational range is of 40 km, the CEP being less than one meter. The Green Dragon is launched from his canister thanks to a booster unit, its wings rotating into place when the airframe leaves its canister, winglets and rear empennage also deploying at launch. Pictorials show a 12-canister launch unit installed on a light armoured vehicle, but other solutions will certainly be available, another showing it on a ship, a naval version being also envisioned. The Green Dragon is considered at TRL 7-8, and IAI looks forward making a major step forward in its development during summer 2018. 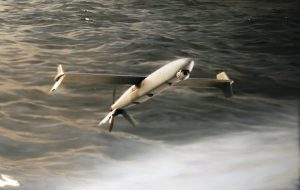