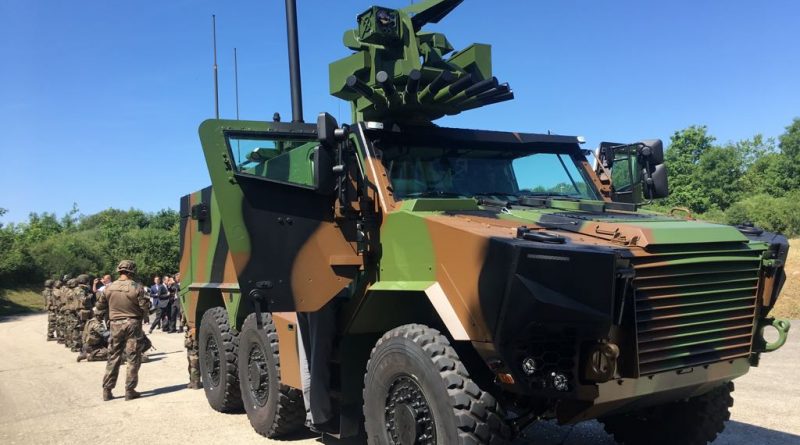 Versailles-Satory, October 26, 2018 – Nexter and CMI Defence have signed a cooperation agreement today which is in the continuity of the intergovernmental agreement between France and Belgium concluded within the framework of their strategic partnership in military cooperation, as well as the appointment by the French government of Nexter group as winner of the “Motorized Capabilities” program (CaMo). The agreement between Nexter and CMI defines how the two companies will cooperate in order to deliver to the Belgian Land Component, and then support and maintain, a fleet of 382 Multi-Role Armored Vehicles (VBMR) GRIFFON and 60 Reconnaissance and Combat Armored Vehicles (EBRC) JAGUAR.Nexter and CMI have thus planned to conclude a subcontracting contract for assembly services in Belgium for the VBMR-GRIFFON and are also studying the assembly in Belgium of the turrets to equip the EBRC-JAGUAR. CMI would act as the final assembler of the VBMR-GRIFFON under the CaMo program, and as the 40 mm turret assembler of the EBRC-JAGUAR. The deliveries of the systems to the Belgian Land component are planned to extend from 2025 to 2030.With regard to post-warranty support to the fleet, which is not currently included in the CaMo program, Nexter is committed to supporting CMI and, in particular, providing it with sufficient data and training to enable it to support the CaMo fleet in Belgium up to the NTI2 level.
Thierry Renaudin, President of CMI Defence: “CMI is today satisfied to be able to contribute significantly to the CaMo program, which aims to provide the Belgian Land component with equipment that allows full interoperability with the French land forces. CMI is proud to be recognized as a partner of its national army to develop its operational capabilities. Our cooperation with Nexter is a good example of how European defense companies can jointly participate in the establishment of the Europe of Defense.”
Stéphane Mayer, Chairman and CEO of Nexter, “welcomed this new industrial cooperation at European level that provides the Belgian Land component with the best solutions suited to their needs, particularly for the support of their fleet. Nexter Group and CMI Defence bring all their know-how to the Belgian Land Component through this agreement which is part of the CaMo program. “